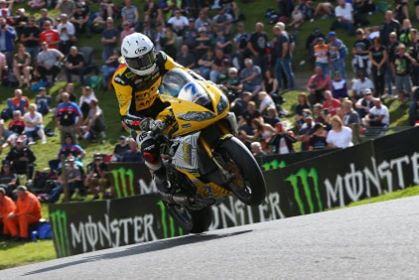 Weekend of ups and downs for Richard Kerr in Assen

KILMACRENNAN rider Richard Kerr had his first crash of the Dickies Supersport Series in race two at Assen yesterday having finished in a superb third place on Saturday.

Kerr started race two on the second row of the grid and found himself in 13th position after the opening laps.

The young Kilmacrennan man slowly made his way into seventh and was soon in a battle with the two men just behind him in the Championship Matt Truelove and Tom Oliver.

Kerr made his move on lap 13 passing Truelove and then got Oliver on the penultimate lap.

Another fantastic result was on the cards for Richard as he was in sixth position going into the final chicane on the last lap, but unfortunately tucked the front end and went down with the chequered flag yards away.

It was an unfortunate end to a fantastic weekend for the team and this was his first DNF of the season.

Richard and the team can take a lot of positives from the weekend as he was on the pace of the front runners, as they head to Donnington Park for the penultimate round in two weeks’ time

Kerr is now in fifth position in the series, seven points behind Truelove after his exit in race two.