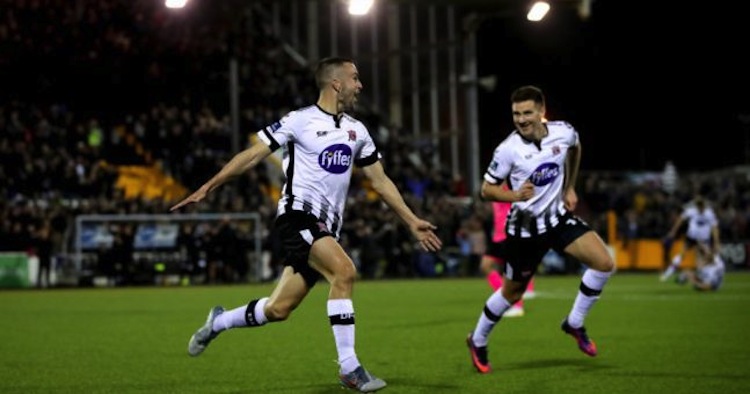 MICHAEL DUFFY says his super strike last night as Dundalk were crowned League of Ireland champions was of of his best ever.

Duffy has had a couple of stellar seasons at Oriel Park since signing for the Lilywhites following his return from a spell at Celtic.

The 25-year-old arrowed to the top corner on 65 minutes last night as Dundalk overcame Shamrock Rovers 3-2 to be crowned champions for the fifth time in six seasons.

“The reason I came to the club was to win trophies and experience nights like this,” Duffy said.

First-half goals by Sean Hoare and Robbie Benson had Dundalk 2-0 up.

Duffy played underage football at Kildrum Tigers with his family hailing from St Johnston. The attacker subsequently joined Derry City where, after graduating to the first team at the Brandywell, he earned a move to Celtic.

On his goal, which keeps Dundalk on course for a domestic treble, Duffy said: “It just opened up for me, I hit it and thankfully it went in. I enjoyed the goal in Derry but tonight, with the occasion and all, makes that one my favourite of them all.”

Man of the match Michael Duffy speaks to Tony O'Donoghue as the Lilywhites claim the title.#RTEsoccer pic.twitter.com/abuDH5D6PS