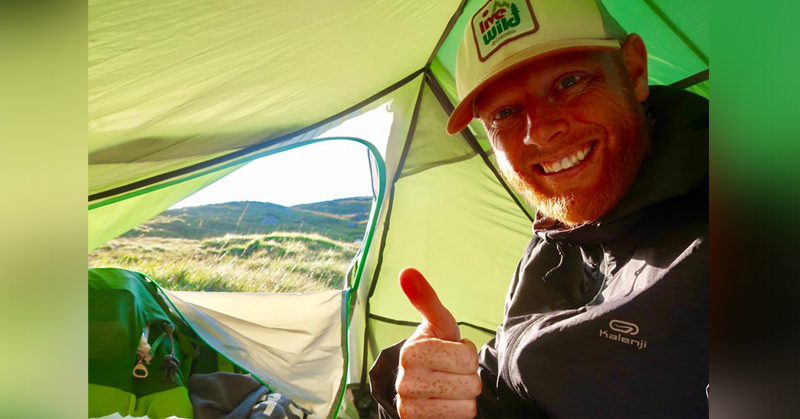 Why this inspirational adventurer is roughing it in Donegal

A Dublin man who turned his life around through hiking is currently touring some of the most beautiful locations of Donegal.

Derek Cullen is 1,800km into his walk around Ireland and a million miles from a life that was once dominated by loss, alcohol and depression.

Derek has walked almost the entire coast of Ireland on his soul-searching mission. He cooks on a small stove and often relies on the kindness of farmers for a place to pitch his tent.

His north-west adventures have taken him to Bundoran, Rossnowlagh, Glenties, the Bluestack Mountains and Glenveagh before visiting family in Creeslough/Ards. Derek has close ties to Donegal as his grandmother Sarah Gallagher is from Creeslough and she was the sister of the famous singer, Bridie Gallagher.

The reason for the trip is not for charity, protest or cause, but because he simply loves walking outdoors.

In 2014 the Dubliner was tired of his self-destructive life and struggling after the death of his parents. But at his lowest moment of physical and mental exhaustion, he realized that something had to give.

He said: “It was my own fault and this was hard to admit. But I had no success with being self destructive, my drinking habit was literally exhausting and I knew it was time to try something different. Looking back, that was the moment I decided to live for my parents instead of trying to live without them, and to chase down the life I wanted rather than eking my way through a life that was falling apart.”

Derek cycled thousands of miles across Africa, hiked the East Coast Trail in Newfoundland, and hiked another 4,500km from Mexico to Canada on the Pacific Crest Trail.

In July 2019 he decided to walk around Ireland, all the while editing daily videos of the trip and sharing his discoveries and life lessons with followers on Facebook.

Three Irish companies (BDifferent Marketing, Elk Recruitment and the Hiiker App) have jumped on board to help cover some of the day-to-day expenses.

But Derek no longer takes these adventures with any grand achievement or purpose in mind.

He believes that spending so much time outdoors has enabled him to manage his problems and anxieties so effectively. He also gave up alcohol three years ago and attributes his newfound “success” as an adventurer to a conscious effort to embrace his life with positivity and perseverance.

“I’m not out here trying to fix my problems anymore. I just like to explore on foot, to watch the land and seasons change, while enjoying the health benefits that come with getting outdoors. Spending so much time outdoors seems to have re-wired my brain and taken me down a much more exciting road in the process.”

You can follow the walk around Ireland Facebook (Derek Cullen Outdoors) or any other social media platform.

Why this inspirational adventurer is roughing it in Donegal was last modified: September 26th, 2019 by Rachel McLaughlin
FacebookTweetLinkedInPrint