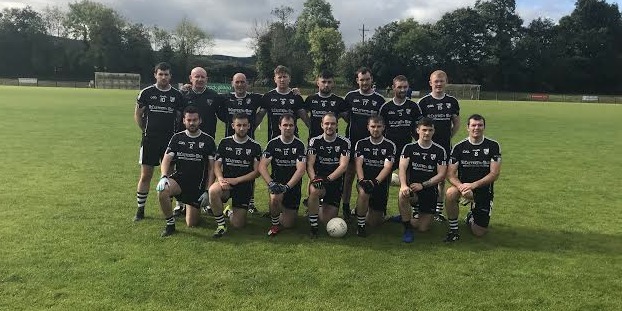 The 54-year-old Donegal manager pulled off a superb double save in the extra period to stave off Urris’ search for an equalising goal.

Daniel Devlin bore in on goal, but Bonner got down to his right. Impressive as that was, Bonner’s next move to spring up to thwart Ryan Doherty’s follow-up was one of the game’s big moments. A goal then and Urris would have been level and had the momentum, but Na Rossa went down the other end for Conor McCahill to open up a four-point advantage.

With regular goalkeeper Ryan McGonagle having moved to New York two weeks ago and with numbers already nigh-on minimum, Na Rossa turned to their most famous son.

Bonner, 40 years after he made his senior debut for the Dooey club and 27 years on from his All-Ireland win with Donegal in 1992, did what he has always done and stepped into the breach. It was so when he returned as the club’s Chairman in spite of his busy schedule with the Donegal footballers.

Na Rossa have bid adieu to scores of young talents to far off fields, but they showed character in abundance here, led by McCahill and Odhran Molloy, who were excellent throughout a cracking contest in Convoy.

Na Rossa led much of the way, thanks to McCahill’s first-half goal, but they needed a dig-out from substitute Aidan McHugh, four minutes into added time, to force extra time with Molloy – who scored 1-5 in total – bagging a killer second goal.

Molloy – who just jetted back from America yesterday – had put four between them in the opening minute of the second half of normal time, but Urris inched back as Alan Friel and Noone, from a 45-metre free, brought the Straid men within striking distance again.

In between times, Na Rossa had another chance of a goal but McCahill was denied and McHugh’s attempted follow-up was also blocked.

Molloy steadied the ship with a free, but Dean Kelly’s brace had Urris on level terms for the first time since the 11th minute.

Alan Friel briefly had Urris ahead until McHugh popped up with the equaliser.

The red mist descended in the closing stages with Urris losing both Oisin Devlin and John McCarron to red cards, with a similar fate befalling Na Rossa’s Odhrán Gallagher.

Na Rossa broke for a second goal in the first period of extra time as Molloy finished well after McCahill made a fine incision down the right channel.

Na Rossa had only 19 players available for this one, but they managed to carve out four good goal chances in the first half of normal time. Of those, however, only McCahill’s 15th minute effort shook the net.

Na Rossa passed up several early openings, but when McCahill finished neatly they were daring.

Midfielder Eugene Molloy made the break and offloaded perfectly for McCahill. With defenders in pursuit, McCahill kept cool to tuck beyond Jonathan Noone, the Urris goalkeeper.

Na Rossa were in again when Molloy found himself on the end of a through ball by McCahill.

Noone was out to save well and the alert Luke Mullins blocked Molloy’s second attempt as Urris breathed a sigh of relief.

The nostrils whizzed again three minutes before the break when McCahill and Molloy combined again. This time, Molloy was denied by the inside of Noone’s post, but the Na Rossa man managed a point from the rebound.

Points from Daniel Devlin, Brendan Doherty and Charlie Doherty kept the Inishowen men in check and they might’ve had a goal themselves, but Friel was narrowly wide when he took aim for the bottom corner.

Na Rossa were boosted by the arrival of McHugh late in the first half. McHugh had played for Keadue Rovers in a Donegal Youth League game at Letterkenny Rovers in the morning, but came in here in the 29th minute.

Molloy slammed over a point to put Na Rossa three to the good at the break, 1-3 to 0-3.

In the face of a strong Urris fightback, Na Rossa held on for a deserved win and their names enters the drum for tomorrow evening’s semi-final draw.