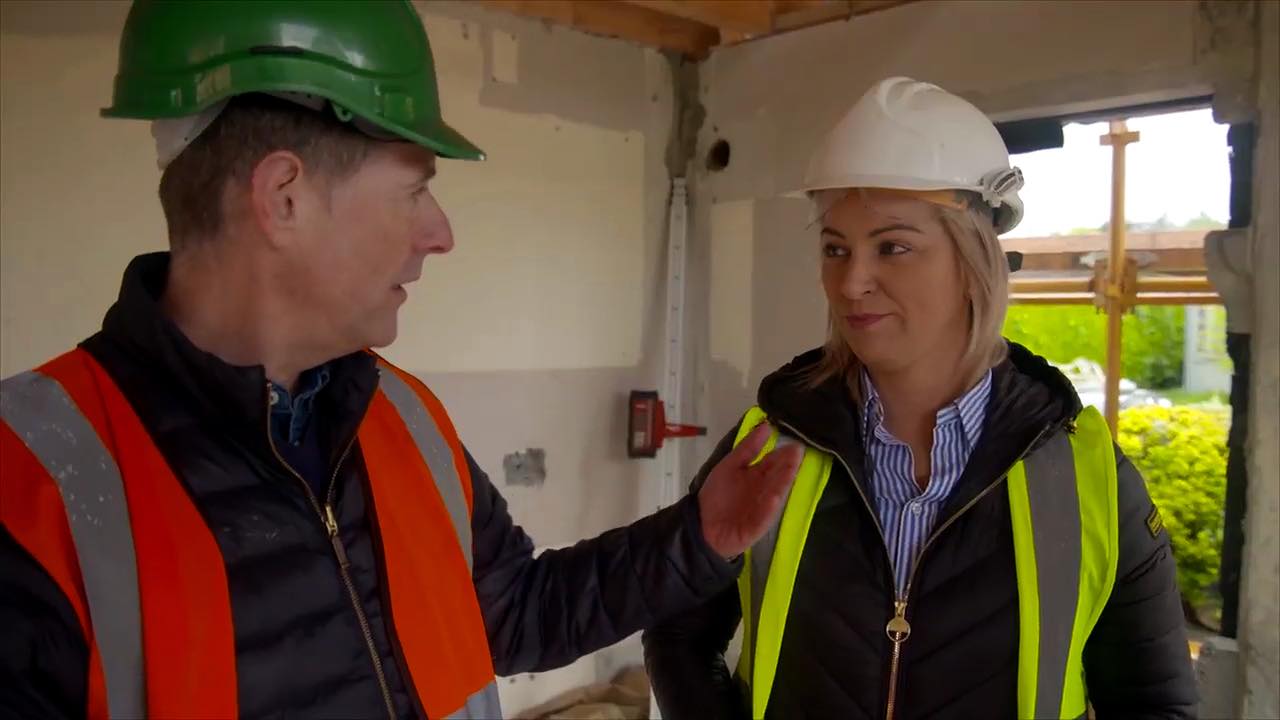 The Burnfoot native was one of three quantity surveyors that were chosen to take part in series twelve of the popular programme, which started earlier this month.

Claire, 34, who lives in Buncrana, will make her on-screen debut in two of the six episodes set to air this year, while also maintaining her place for the thirteenth season next year.

Speaking to Donegal Daily, Irwin explained when a replacement quantity surveyor (QS) was sought in March 2018, she jumped at the chance to join the show.

“RTE were advertising for another QS and I just took a notion that I would apply for it,” She said. “Then before I knew it, I was called for an interview and went a process for about a month and, in the end, I was selected to join the line-up which I was thrilled about.”

Claire Irwin on-set of Room to Improve with Dermot Bannon

Irwin, who works for McCallion Group in Buncrana, admitted that she was a big fan of the show before she applied, saying she didn’t watch much TV during the week but always watched ‘Room to Improve’.

“Myself and my husband Declan would always sit down on a Sunday night and watch the show because we wouldn’t get watching a lot of the tv during the week, to be honest.

“And around the time I applied, we would have been renovating a house ourselves in Buncrana, so it probably would have been a bit more relevant for my husband Declan to be watching it, but I am in the construction business too and I loved watching it.”

The first episode starring the Buncrana QS is set in Ashford Co Wicklow, where Irwin helps a couple, Frances and Nigel, transform a 1990s bungalow into their dream home.

Meanwhile, in the second episode, which is set to air on October 6th or 13th, will see Claire help cost an ambitious renovation of a cottage in Tramore, Co Waterford.

Talking about her time in front of the cameras, Irwin, who has been a quantity surveyor for the last 12 years, said: “It was brilliant, it really was. It was a fantastic experience and it was brilliant to work alongside Dermot (Bannon) he is a brilliant architect.

“He was a different calibre of an architect to anything that I have ever worked with before.

“Dermot is very creative and innovative and he definitely surprises you with his ideas and designs, and when it is all finished, his houses are absolutely phenomenal.

“The filming element was newer to me,” Irwin added. “And the first day might have been a bit daunting, but the film crew were lovely and once I got half an hour over me I was fine.

“But overall, I was glad that I applied and I can’t wait to see the episodes this year and next.”

You can watch Claire Irwin on Room to Improve Sunday 29th September at 9.30pm on RTÉ One.
Burnfoot woman set to star alongside Dermot Bannon in RTE’s ‘Room to Improve’ was last modified: October 1st, 2019 by Shaun Keenan