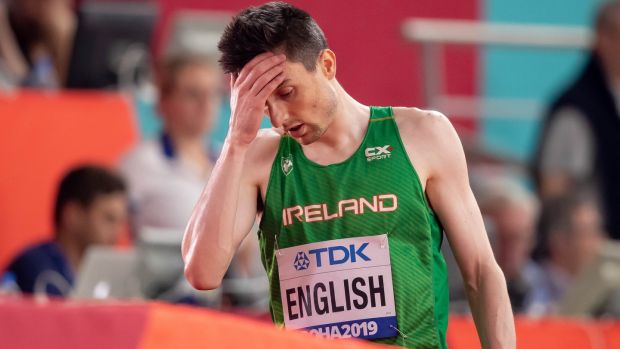 MARK ENGLISH will swiftly turn his focus to the 2020 Olympic Games after a disappointing exit from the IAAF World Athletics Championships yesterday.

Running in the fourth heat of the men’s 800m, English was the last of the seven runners in the heat.

Unusually for him of late, English – out of lane 2 – ran aggressively from the gun and led at the bell.

English passed the 400m mark in 51.88 seconds, but he was gnashing his teeth soon after in sweltering Doha temperatures.

One-by-one, the competitors passed him and the Letterkenny man finished in 1:47.25.

“I’m obviously disappointed, I would have liked to qualify for the semi-final,” English said.

“I just tried to put myself in contention for one of the six fastest loser positions.

“I knew there were three good guys in that race and it turned out there were six in the end.

“It was either take it by the scruff of the neck or leave it up to hope and for me that was the better option.

“I don’t what’s been hitting me at 500 metres every time this season, but something seems to be clipping me.”

English was a late call up for the Championships via the IAAF’s ‘quota’ system having been narrowly away from the qualifying mark in recent months.

He said: “It didn’t work out obviously, and it’s hard to analyse the season as a whole straight after the race, and what to take from it.”

Now, though, the just-qualified doctor will firmly turn his mind to the sport full-time over the next year as he plots a path to Tokyo.

He said: “I’m going to take next year off to go full-time training. 2020 was always my biggest goal when I took that time off. I’d love to make my second Olympic games and give that a good rattle when I get out there.”