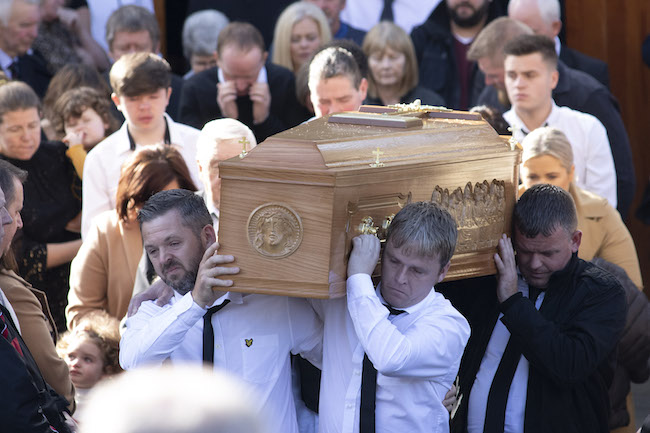 ‘THERE was just something about Diddler’.

The words of Barry Dillon, as he read a eulogy at the Funeral Mass of his brother Paul ‘Diddler’ Dillon this afternoon rang true for the huge crowd of mourners.

The skies darkened over Newtowncunningham, with the sun peeking its rays through, as hundreds turned out to say a final farewell to the east Donegal village’s best-known son.

The 45-year-old father-of-three from Ballybegley passed away on Thursday evening after a brave battle with Motor Neurone Disease.

He had fought the debilitating illness with such courage and had bore his soul during an interview in the summer when he told of how he was learning ‘to do things differently.”

He was the athlete, the butcher, the GAA coach, the anything and everything to those who knew him.

“Many said that he was one in a million however we feel that there was no one quite like Diddler,” Barry said.

“He got on with everybody no matter what their age.  He was the life and soul of any social gathering.

“If Love could have save Paul, he would have lived for ever.”

Staff from Kernan’s Eurospar, where Paul worked, formed a guard of honour, while members of Lifford-Strabane, Inishowen, Letterkenny and Foyle Valley athletic clubs did likewise on the approach to the Church. Paul’s remains were carried through a guard of honour formed by Naomh Colmcille GAA club on the way into the Church. 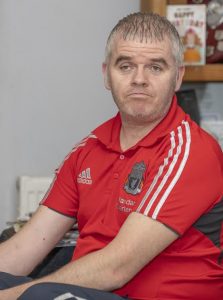 A butcher in Kernan’s, Paul was the bubbly figure whose infectious smile and sometimes mischievous persona made him a popular figure with the scores of customers and the staff with whom he shared a bond that went far beyond the counter.

Predeceased last October by his mother, Deirdre, a little under a year ago, Paul is survived by wife Emma, his daughters Lilly-Ella, Heidi and Daisy, his father Tommy, his brothers Gerard, Barry and Raymond, his sisters Caroline and Ciara.

Barry remembered in the eulogy: “Diddler was so content with his family and loved his life. He didn’t want for anything else, in his eyes he had it all.”

Hundreds – 1,200 in fact – had lined the same streets of the village just over seven months ago.

The ‘Dash for Diddler’ drew unprecedented crowds in February to raise funds ad part of a fundraising drive undertaken by a local committee spearheaded by Councillor Paul Canning.

Back then, the beads of sweat dripped down the reddened cheeks after the run through the quick course. 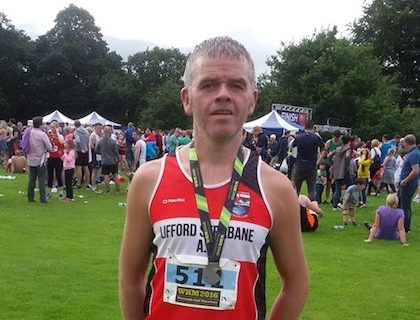 Paul Dillon after completing a Waterside Half Marathon.

Today, many of the same people wiped their cheeks again, this time clearing the tears that trickled at the thought of a much-loved man taken much too soon and much too young.

Paul was an athlete with Lifford-Strabane AC who ran all distances from 5k locally to marathons.

Earlier today, he was remembered by participants at the Donegal East Half Marathon with Lifford-Strabane AC members running the course a little earlier than the scheduled time in order to be on time to pay their respects.

Just four weeks ago today, a team of 15 of his friends and family took turns to push Paul, who had used a wheelchair in recent months, around the 13.1-mile course of the Waterside Half Marathon – a venture that helped raise in excess of €8,000. 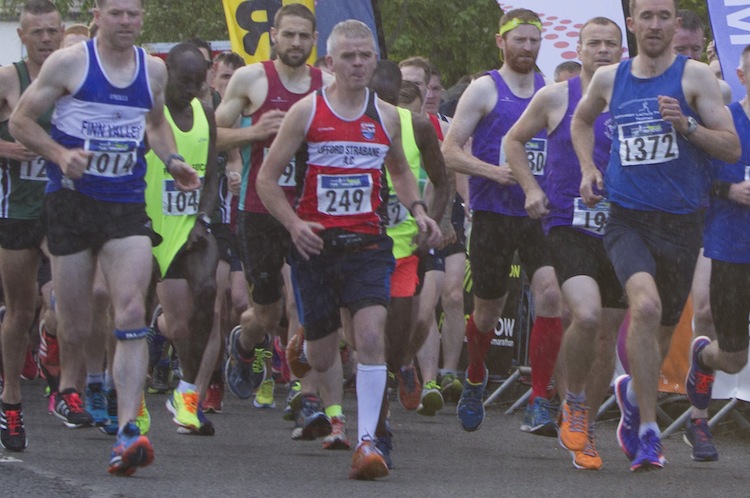 Paul Dillon was a familiar face at the front of the field at athletics events across the North West.

Today, some of them carried their brother, friend and colleague to his final place of rest as You’ll Never Walk Alone – the anthem of his beloved Liverpool – rang out.

The Church of All Saints was packed to overflowing and the throngs of people who gathered outside was an illustration of the impact, imprint and legacy Paul Dillon has left behind him.

Truly, there was ‘just something about Diddler’.