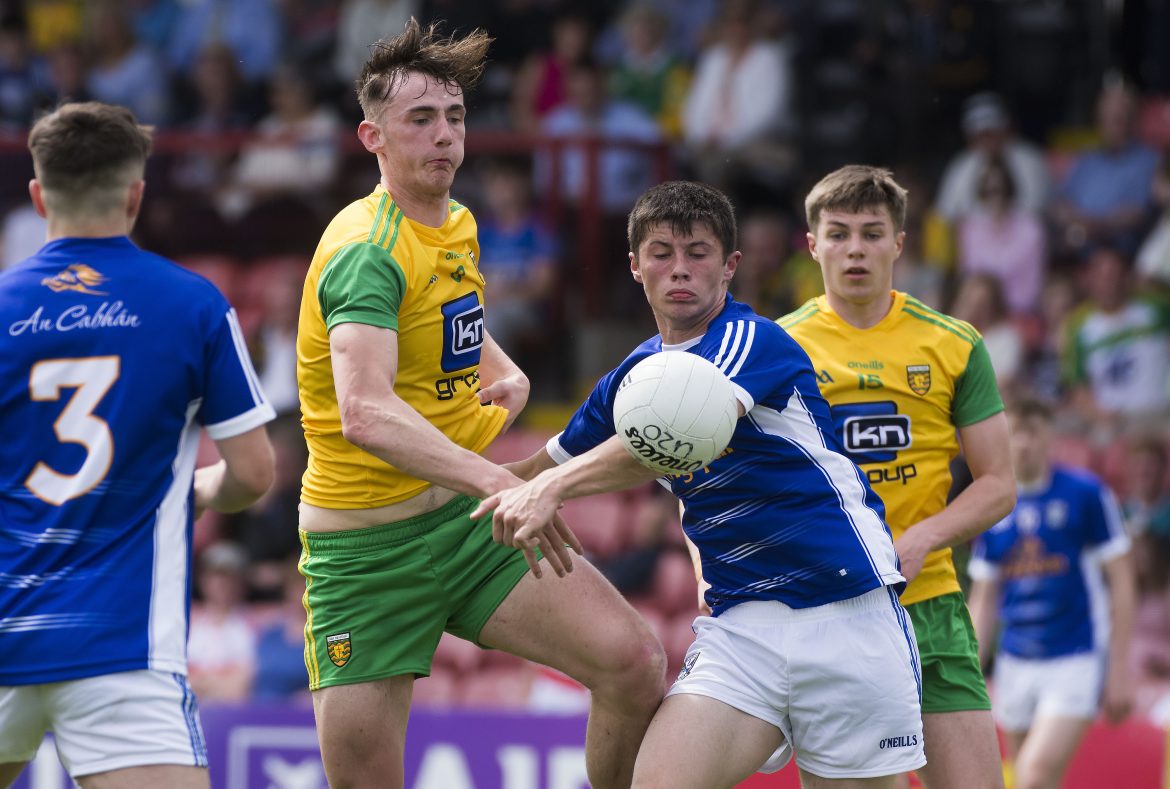 There were almost four minutes of added time played when McGee – who was sent in as a half-time replacement – went short with a 50-metre free. McGee worked the play with Martin Maguire and the big midfielder soared over the match winner.

In torrid conditions, on a night riddled with handling errors, McGee proved the difference in the end.

It was certainly rough justice on Naomh Colmcille – two Divisions beneath their opponents in the League – who led for much of the second half.

Aided by first-half goals from PJ McBrearty and Michael Lynch, Naomh Colmcille looked on the cusp of a coupon-buster until Darren Ferry and McGee landed the points that, finally, swung the pendulum in Cloughaneely’s favour.

This game was originally pencilled in for Saturday but was called off as a mark of respect to the late Paul ‘Diddler’ Dillon, the former Naomh Colmcille player and coach who passed away on Thursday evening. The club flag flew in the downpour at half-mast and a minute’s silence preceded the contest.

Naomh Colmcille got a dream start when McBrearty powered forward to collect a Michael Lynch off-load. McBrearty, from the moment he set off, had just one thing in mind and the youngster prodded past Michael McGinley.

Cloughaneely – with McGee and John Fitzgerald kept among the substitutes – hit back and were level just after the midway point of the first period.

Paul Sweeney and Ferry popped over points for the Falcarragh representatives and they were back on the even keel when Shaun McGarvey landed a free from the edge of the D.

Cloughaneely took the lead in the 20th minute. Darren Ferry’s ball in was caught by Gallagher who turned and, with only ‘keeper John Roulstone to beat, tucked home.

Naomh Colmcille hit back, though, and their next score – 22 minutes after they last registered – was another goal.

It was a goal made in the Lynch household with William’s searching ball in met by Michael, who riffled to the net from close range.

Matthew Crossan and William Gillespie, from a free, pushed Naomh Colmcille 2-2 to 1-3 ahead – a lead they would hold as they headed for the half-time refreshments.

Naomh Colmcille, the 2017 Ulster Junior champions, had only survived relegation to Division 4 following a dramatic finale to the League campaign, having had to play games away from home for 12 weeks following a sanction.

They regrouped for wins over Gaeil Fhánada and Burt to seal a place in the last eight.

Yet, Michael Lynch and a Daniel Clarke free maintained the edge for Naomh Colmcille, but when McGee boomed over 12 minutes from time, the margin was down to a point.

Michael Fitzgerald fisted over to level the game, but Gillespie kicked Naomh Colmcille back in front and threw down the gauntlet.

Sub Ryan McErlean had a chance to win it, after Ferry levelled again, but his shot tailed off target and the stage was set for McGee to win it.

They meet Aodh Ruadh on Saturday and the ‘what ifs’ will nag at Naomh Colmcille for some time.