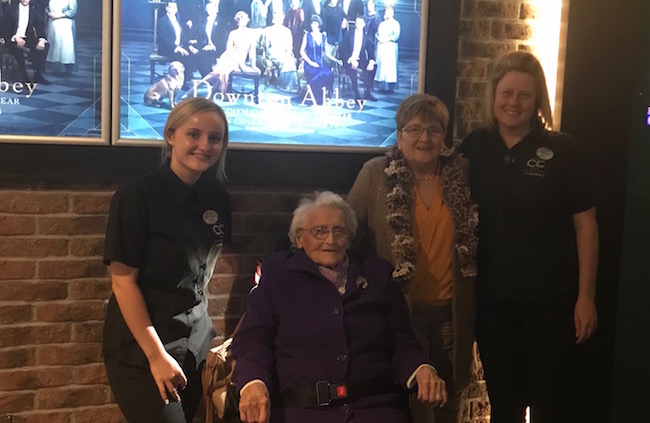 A 103-year-old woman who visited her local cinema for the first time in more than 80 years told friends “Make sure you bring me to the sequel.”

Ruby Druce was last at the cinema when she cycled there in the 1940s.

But a combination of married life and working for more than 45 years in a local shirt factory in Co Donegal meant Ruby never got back to the silver screen.

All that changed last weekend however, when Ruby’s niece Margo Butler decided to take her to see period drama Downton Abbey.

Margo revealed “Ruby used to love the cinema but it must be 80 years she was last there. She used to cycle from her home in Castlefinn and across the border into Strabane in Co Tyrone.

“She likes watching Downton Abbey on the television and I just happened to say to her that there was a film of it on in the cinema and she decided she’d like to go.”

Owner of Century Complex in Letterkenny, Mark Doherty, heard about Ruby’s special occasion and put on a slap-up meal at the adjoining Backstage Bar and Grill.

Margo, who used to work at Century Cinemas, said that Ruby was delighted to meet Mark whom she had heard so much about.

“She was treated like royalty and she was so happy to meet Mark. He couldn’t do enough for her asking her if she wanted tea and anything else.

“She didn’t bother ordering popcorn or sweets because we’d had such a lovely meal beforehand.

“She really, really enjoyed the film and the whole occasion. She even asked us on the way out to let her know when the sequel is on so we can go again,” revealed Margo.

However, Margo would have to be quick as bright-as-button Ruby’s diary is filling up fast.

She turns 104 on December 31st and has already booked her party night out in another local venue.

“She’s a great character. Sharp as a tack and she is so aware for her age. It’s up to the rest of us to keep up with her,” laughed niece Margo.

Ruby with the one and only Mark Doherty from Century Complex.