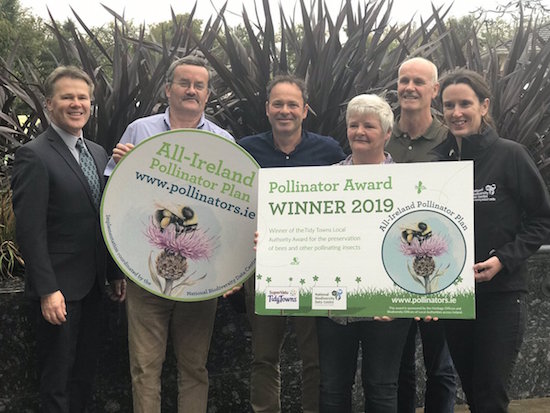 Buncrana proves it has some ‘pollen’ power!

The winners were announced at the National Tidy Towns Awards in The Helix, Dublin City University on Monday, September 30.

“They have also done so much to help create awareness of our biodiversity and of the importance of pollinators by working with the local national schools, Beavers, ICA, and through a local garden competition.”

“One third of our 99 bee species are threatened with extinction from Ireland.  This is because we have drastically reduced the amount of food (wildflowers) and safe nesting sites in our landscapes.  The All-Ireland Pollinator Plan was launched in 2015 as a shared plan of action to try to reverse these declines and work with communities, businesses, parks, schools and farms to make an Ireland where pollinators can survive and thrive.”

“Since 2016, Local Authority Heritage Offices & Biodiversity Offices in partnership with the National Biodiversity Data Centre have sponsored an annual Local Authority Pollinator Award as part of the ‘Tidy Towns’ competition” explained Joseph Gallagher, County Donegal Heritage Office.  “The focus of the award is on biodiversity and the crucial role that the declining population of Irish bees play in the pollination of our plants, trees and vegetables.  The award encourages local groups to implement pollinator-friendly actions in their towns and villages.  The award contributes to the achievement of the All-Ireland Pollinator Plan.”