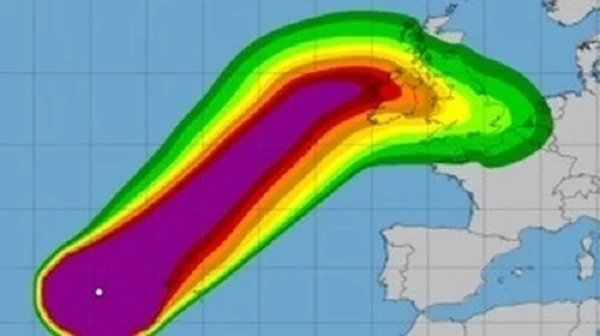 A Status Yellow Rain and Wind warning will be in place for all of Ireland from Thursday morning at 9am until Friday morning.

Heavy rain, flooding and disruptive winds are forecast for all counties for the duration of the storm.

Western counties will see the worst of the strong storm. Met Eireann has issued a Status Orange wind warning for Galway, Mayo, Clare, Cork, Kerry and Limerick on Thursday night.

High seas will make coastal flooding a strong possibility, according to forecasters, while gusts of up to 100km/h could bring down trees and lead to power outages.

The National Emergency Coordination Group (NECG) are meeting at 10.30am to discuss the impact of the storm. Donegal County Council has activated its Severe Weather Assessment Team in response to the event.

“The exact track Lorenzo will take over Ireland is still subject to change. The most severe winds associated with Lorenzo are likely in Atlantic coastal parts on the southern flank of the storm, however strong winds are possible in all areas,” said Met Eireann.