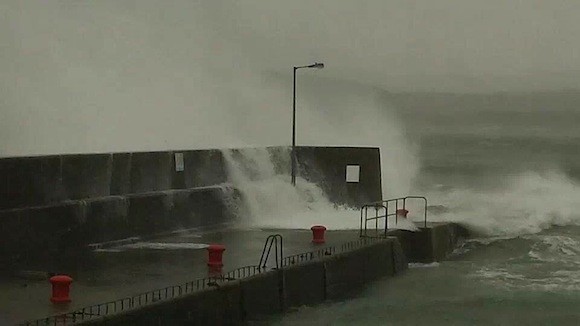 Flooding fears and severe winds ahead as Storm Lorenzo hits

Two weather alerts are in place for Donegal today as the powerful Storm Lorenzo tracks over Ireland.

The north west is not expected to see the worst of the violent storm but the public is being asked to be vigilant for potentially dangerous weather.

Disruptive winds, falling trees and flooding will be the main impact of the former hurricane in Ireland, warns Met Eireann.

Status Yellow Wind and Rainfall Warnings are in place for the entire country from 9am today (Thursday) until Friday morning.

Gusts of up to 100km/h are forecast and more than 50mm of rain will fall in parts of the west and north-west, resulting in flooding.

There is a high risk of trees and tree limbs falling due to trees being in full leaf at this time of year. With falling leaves also blocking drains and gullies, some surface flooding is possible, warns Met Eireann. Property owners and occupiers are being asked to check drains and gullies for potential blockages.

Sea surges are forecasted along the West coast from the southwest coast up to Donegal of .6m to 1m and the public are being asked to be extra vigilant along the coast.

Starting off dry today but turning wet and windy during the morning with gales along the coast. Very high seas are expected along the Atlantic coast as storm Lorenzo approaches. Highest temperatures of 15 to 19 degrees. During the evening winds will veer west to….. pic.twitter.com/wxuhTPdfBc

The Irish Coast Guard is advising the public along coastal areas to ‘Stay back, stay high and stay dry’.

Donegal County Council’s Severe Weather Assessment Team has met in response to Storm Lorenzo and says it will continue to monitor local conditions closely as the storm progresses.

The Council is asking property owners and occupiers of properties in areas susceptible to coastal flooding to be vigilant.

Motorists are being asked to take extra care while driving during stormy weather and to be extra vigilant of cyclists and pedestrians and to be mindful of the risk of falling trees and debris.

There is also a risk of power outages and the public are being asked to be prepared and to check on elderly or vulnerable family and neighbours to make sure they are safe and warm.

“Donegal County Council’s Severe Weather Assessment Team will continue to monitor the situation and all Council Services are in a state of readiness as is the norm,” a council spokesperson said.

You can keep up to date on conditions by signing up for free alerts to your phone by registering at www.mapalerter.com/donegal or by following Donegal County Council on Facebook or on Twitter @DonegalCouncil.