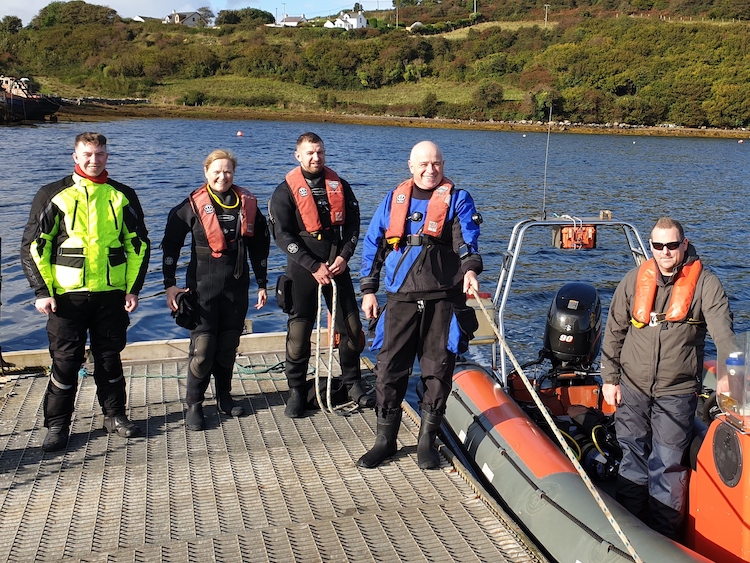 SHEEPHAVEN DIVERS enjoyed a great dive at Melmore Head last Sunday, when Ryan Ward lead a boat dive to that location in what turned out to better than expected weather conditions.

A northerly breeze had built up a bit of a sea, which crossed an outgoing Spring tide to produce a busy enough sea, but not enough to interfere with diving conditions at this exposed headland.

The dive was conducted in one stick, thanks once again to Ryan Ward taking the helm of Dive Boat Aine, which was conducted for a surface to surface time of up to 50 minutes to depths of over 20 metres.

The divers went with the tidal flow, moving westward in good water conditions of horizontal visibility of over 10 metres and 15 degrees Celsius.

As always at this location the large fish life was out in force, with Conger Eels, Ling, very large Pollock, Bib along with a range of shellfish observed by the divers on Sunday morning.

Sheephaven SAC continues to plan for it Try A Dive evening at the Mevagh Dive Centre, Carrigart on Wednesday 15th October at 8.00pm and with that in mind to invite new entrants into recreational diving.

A place can be booked by contacting Damien Kelly on 086 8307020 or Anne Boyle at anneboyle@eircom.net .

For one young man Scuba Diving was the beginning of his career at sea, which so far has taken him to the Middle East and then onto the Far East, South America and Australia on board a LNG tanker.

Matthew McMonagle joined Sheephaven SAC as a teenager and when old enough completed his Trainee Diver and then this Club Diver grades.

After completing his Leaving Certificate Matthew went to the National Maritime College of Ireland in Cork, where in addition to his academic studies, he was placed on board ocean-going ships to serve his time at sea.

His first contract was spent on the LNG tanker Pan Americas, sailing just over 6 months visiting various places like Brazil, Australia, Trinidad and Tobago, Singapore, the Panama Canal and China.

During this time Matthew was learning the basics of life on-board a vessel, its daily routines, port operations and under studying the officers for his future ranks.

Matthews’ second vessel was on the LNG tanker Al Daayen, where he spent over four months travelling between Qatar and Italy transiting the Suez Canal and high risk areas with temperatures in the high 48 degrees in Qatar.

Once again he was under studying the Officers and taking control of critical operations after having built up his knowledge of the routines involved.

His final vessel it is not yet confirmed but he has now completed 11 months sea time and will return to college to complete his Certificate of Competency examinations during summer months of next year.

Sheephaven SAC wish Matthew all the best in his seafaring career, along with safe voyages and he has come a long way from the teenager who began his life at sea Scuba Diving in the waters off Donegal.