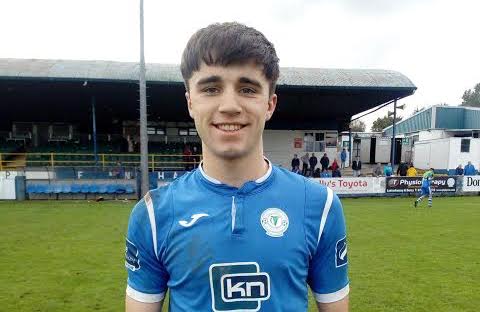 The Finn Harps U19s take on Shamrock Rovers at Finn Park on Saturday in a National League quarter final.

Harps are fresh from a superb 3-0 win over Dundalk last weekend.

Rovers finished third in the Southern section having been pipped to second by Waterford on goal difference.

Harps will do well to contain Thomas Oluwa, who has notched 17 goals for the Hoops in the regular season.

Jamie Browne (pictured) leads the way for Harps with a hat-trick last weekend bringing his total for the year to 13.  Rovers’ last league outing was a 1-0 home defeat to Bray Wanderers.

Harps Manager Joe Boyle is looking forward to the game.

“Last week’s match against Dundalk was an important victory and we were very pleased with the performance levels,” Boyle said.

“There is always room for improvement.  Shamrock Rovers will probably consider themselves unlucky because they lost out on second place in the Southern group on goal difference and their recent form has been very good.

“They have a lot of talent in their side but so do we, so I would encourage people to come along on Saturday and get behind the lads and enjoy what should be a very competitive quarter-final.”

Kick-off at Finn Park is at 2pm.