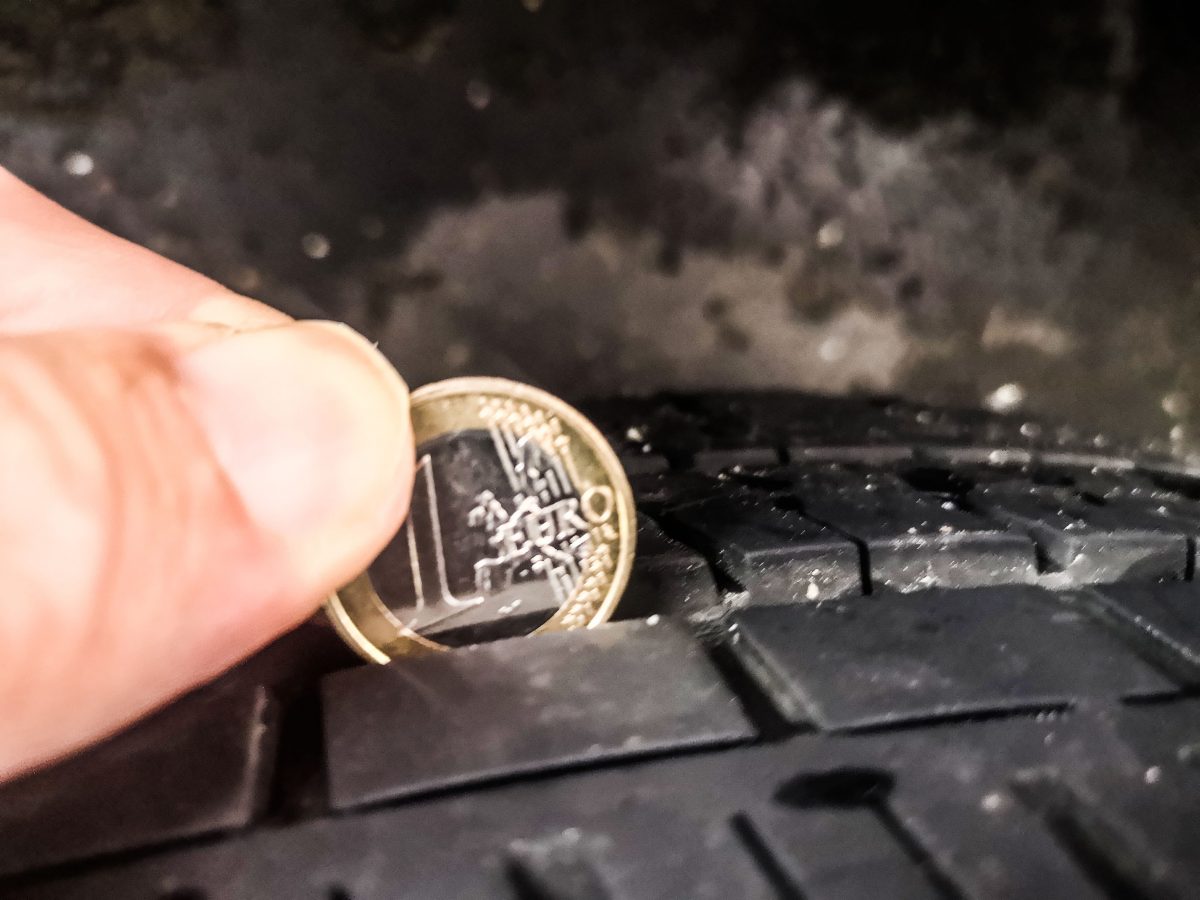 DD Motoring: How to check if your tyres are safe to drive on with a euro coin!

A patient awakens in their hospital bed. They have been involved in a crash. Their injuries were lite considering that the car they were driving was written off.

It’s the day after the crash and lying there they start to go over in their mind what had happened the day before.

Our recovering patient was driving a car, the second driver was driving a small commercial van and the third vehicle involved was a 40-foot articulated truck.

The driver of the car (our patient) was on a regular commute to work driving along the same road that they have driven along for the last 15 years. They were very familiar with the journey.

The gold rim of a pound coin is an easy way of finding out if your tyres are above the legal thread depth. Photo Brian McDaid.

That morning it was wet and miserable and the road was very busy. On the approach to a right turn off this narrow road, a van driver was waiting to make a right turn.

Our driver recalls in their mind that they were late to spot the van sitting stationary in the middle of the road because of the poor driving conditions that winter’s morning due to the weather, lack of daylight and spray from other oncoming vehicles.

Our driver had to brake late and very hard as they headed for the rear of the van sitting stationary waiting to turn right, skidding out of control.

That morning was the first time that our driver had ever experienced the pulsing feeling as they applied pressure to the brake paddle.

This was the Anti-lock Braking System figuring out that the tyres on the car were skidding on the wet surface.

The A.B.S. was releasing and locking the brakes in an attempt to get a grip and also let the driver try and steer the car out of danger, but things were happening far too quick.

An accident waiting to happen when tyre are not regularly checked.

Our driver’s car ploughed into the rear of the stationary van which in turn forced it out on to the middle of the road into the path of the oncoming articulated truck that drove the small van back up the road again also collecting our driver’s car in the progress.

Laying in their hospital bed our driver already knows in their mind one factor that may have contributed to this serious accident that they were involved in.

I suppose what they thought was lucky in not being stopped at a roadside checkpoint and charged for the illegal condition their worn tyres has now become an unlucky let off for them.

The crash described above was only an example of what can develop in an emergency where tyres have to worked the hardest to get a car stopped in a short space on the road.

The condition of the tyres on your car is low on the list when it comes to our safety and that of others on the road.

Tyres worn completely down to the depth diagonal depth marker which is a disaster waiting to happen in poor winter driving conditions. Photo Brian McDaid.

For the majority of the life of a tyre on a family car, it performs perfectly for 98% of the time.

But once the thread dept wears down tyres are like time bombs just waiting to let you down when you’re are faced with an emergency described above and your tyres try in vain to get you stopped but are well past their best resulting in bad breaking in bad road conditions.

For all the development in the motor car, the best that any family car will be able to identify is when one of its tyres have become deflated.

Few will be able to tell you that your tyres are worn and have no grip on the road until the moment you have to use them in an emergency and by then it’s too late. Modern cars now also have longer service intervals so tyres can go unnoticed and become dangerously worn and illegal on the road.

The gold rim on the outside of a euro coin is the simplest way of checking the tread depth on your tyres.

Placing the coin into the threads on the tyres if the gold rim can still be seen, your tyres are below the legal limit and even more important the performance of the tyre especially in the wet is completely useless.

Putting it to the test The thread depth is great thats the gold rim of Euro coin which is a good indicator that your tyres are still in good condition and legal. Photo Brian McDaid.

Do not end up as the driver of the car that we have described above in this road safety scenario this week, go and get your tyres checked for the coming winter months.

DD Motoring: How to check if your tyres are safe to drive on with a euro coin! was last modified: October 9th, 2019 by Brian McDaid