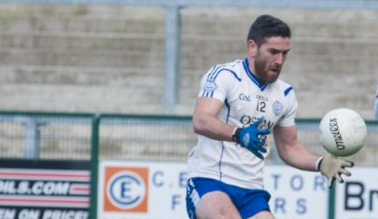 Listen: “I came all the way from Australia, I wasn’t going to mess about”

AFTER FLYING all the way back from Australia just a couple of weeks ago, Darren McGeever is gunning for glory with Cloughaneely – and his dramatic late goal last night fired them into the Intermediate final.

Four minutes into added time, McGeever – with his team trailing by a point – got through and, rather than fist over to force extra time, blasted to the net to seal the win.

The teams shared a draw after extra time on Saturday, but McGeever’s golden bullet catapulted Cloughaneely into Sunday’s final against St Naul’s.

“I came all the way from Australia, I wasn’t going to mess about,” McGeever laughed to Donegal Daily/Donegal Sport Hub afterwards.

“I just wanted the game done, especially after the weekend. I just pulled on her and it went in the back of the net.

“I don’t know what was going through my head,

“The boys were giving off to me about going up the field. I just said ‘screw it, I’m going to keep going’…I was one-on-one and I heard the boys shouting to put it over. I just said I’d go for it.”

Cloughaneely have developed a habit of leaving it late this year.

But they’ve managed to stay standing and have a quick turnaround for Sunday’s final.

McGeever said: “One thing about the group, it just doesn’t stop. I’ve been a part of many teams that just folded, but these boys here just keep going.”

Listen: “I came all the way from Australia, I wasn’t going to mess about” was last modified: October 9th, 2019 by Chris McNulty
FacebookTweetLinkedInPrint
Tags:
2019 Donegal IFCAodh RuadhCloughaneelyDarren McGeever