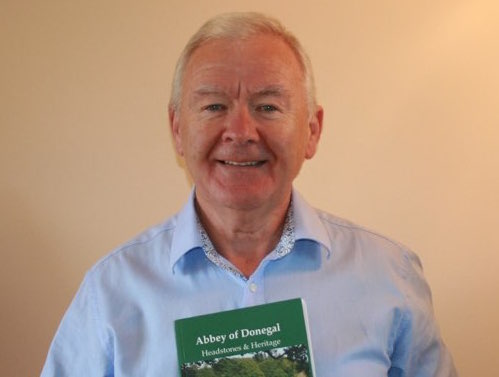 Letterkenny native, Seamus O’Doherty, will launch a new book this weekend depicting the remarkable history and heritage of the famous Abbey Friary in Donegal Town.

Now resident in Dublin and a former Senior Manager with the General Post Office, the Ard O’Donnell man took early retirement in 2005 and for a brief spell lived in Donegal Town from where his wife, Mary (McGonigle) hails.

“I was always into genealogy and had done a lot of research on my family’s graves and backgrounds. I would visit regularly the old graveyard at Leck and I also have two uncles buried at New Leck.”

But it was while resident in his wife’s home town – they lived there for four years – that inspired him to research and ultimately produce a book that is as almost as remarkable as the structure and surrounds it depicts.

The story of Donegal Abbey is the story of Ireland from the 15th to the 17th century, Seamus indicates.

“It is also the story of the O’Donnell chieftains of Tir Chonaill, who founded the Abbey in 1474, and their epic struggle as one of the last strongholds against English rule in Ireland. From the Act of Suppression of 1535 by Henry VIII to long after the destruction of their abbey in 1600 the friars continued to administer to and received support from the people of Donegal.”

The completion of the Annals of the Four Masters by four of their members in 1636 represented a further testament to the extraordinary friary.

Seamus, who put four years of research into the publication, points out that his book brings together for the first time all the strands of history that had contributed to the establishment, flourishing and finally the destruction of the famous Abbey.

“The multitude of characters, like Aodh Ruadh, Niall Garbh, Michael O Cleirigh, Ineed Dubh, Lord Mountjoy and many others are brought to life as their lives and actions intertwine and impact on the historical events that shaped this period of Irish history.”

The book also details those buried in the Abbey from the O’Donnell chieftains and their sub-chieftains through the turbulent times of the Plantation, the Famine and the establishment of the Irish Free State to the present day.

“It puts down a marker in time to record the graves and inscriptions still legible there which cries out for this remarkable monastic site to be given the due recognition if deserves and never received,” Seamus declares.

Having resided in Donegal Town for those four years, he had ample opportunity to visit the landmark building and its surrounds. “It’s a very tranquil place and there are beautiful view of the bay.”

Despite its history, there had been no record of the graves there but now thanks to the Letterkenny native’s relentless endeavours there is. In all he investigated 400 graves at the site incorporating 1,000 people. “There are also other graves that are unmarked.”

Apart from the text and many of the images inside, Seamus was also responsible for designing the cover of the book and the photograph on the back.

“Abbey of Donegal – Headstones & Heritage’ will be launched at Pier One in Donegal Town this Friday night at 7.p.m. while on Saturday afternoon, Seamus will be in Eason’s book shop at the Letterkenny Shopping Centre from 2.p.m. to 4.p.m. to sign copies of his impressive new publication.