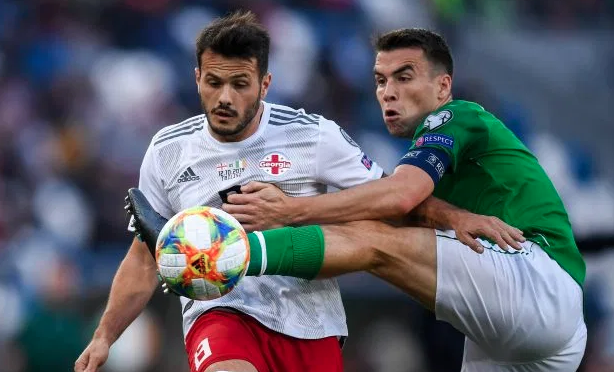 REPUBLIC OF Ireland captain Seamus Coleman has expressed the belief that Ireland can upset the odds and win in Geneva tonight.

Coleman and Ireland face Switzerland in a Euro 2020 qualifier at Stade de Geneve.

Following Saturday’s 0-0 draw with Georgia in Tbilisi, Ireland seem likely to need a win against Switzerland or Denmark – who visit the Aviva Stadium next month – in order to qualify.

“But one of the Swiss journalists touched on it there: we have conceded just two goals. Playing the last two games now, we have to be positive and if we get the win it will have been an unbelievable campaign.

“I fully believe, like I do every time I go out in that green shirt, that we can get a result and no better place than here with the Irish fans over. As the manager touched on, these are a world-class team but I believe that can be the case.”

Ireland have copped a lot of flak in the wake of Saturday’s stalemate, but the Killybegs man isn’t faze by the challenge.

Coleman said: “It’s going to be tough but, look, we have played at this level for long enough to know it’s hard to defend for 90 minutes against these top teams and keep a clean sheet.

“But if we go 1-0 up I would back us, but it would be a very tough job. But on the pitch is where the talking will be done and hopefully we can be happy after it.

“As the manager touched on we didn’t play well enough in their half at times on Saturday, but we got a point on the board and now we go into this game wanting to win. We really believe we can do that and, if we do it, will have been a great campaign.”