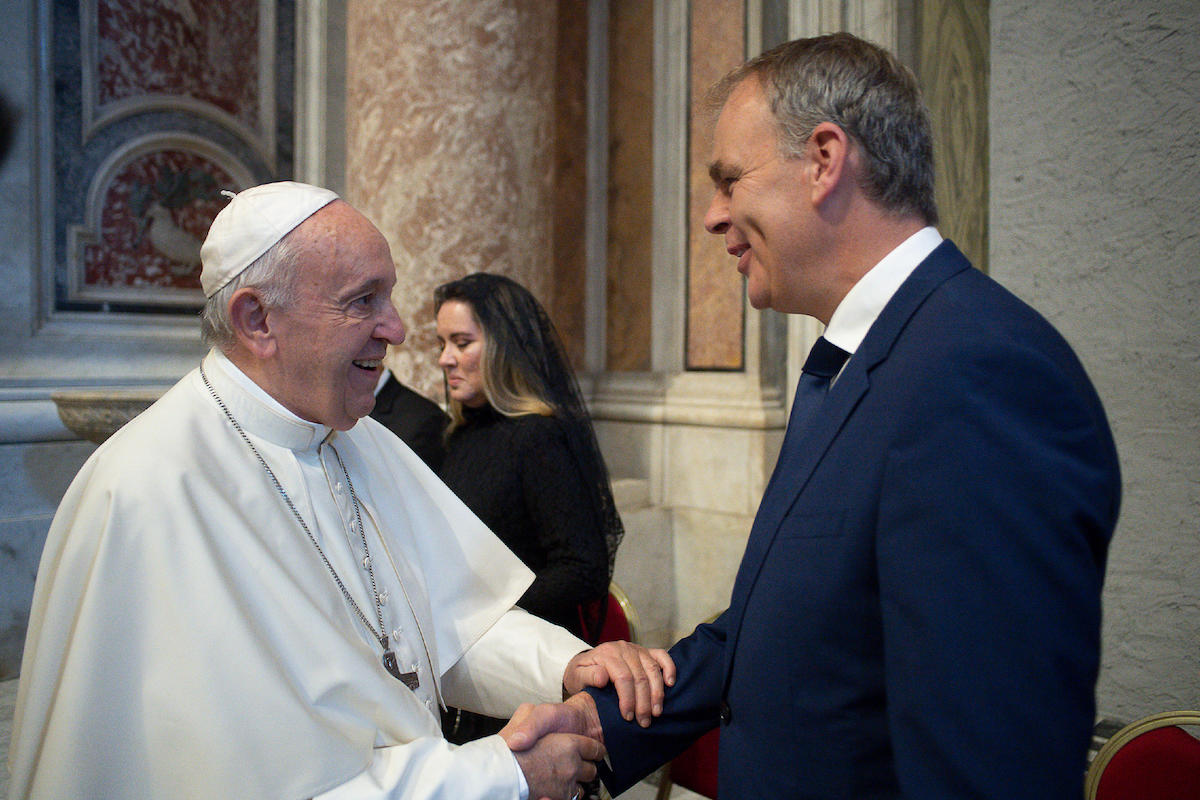 “One of those moments to treasure” – Joe McHugh meets the Pope

Donegal TD Joe McHugh has described meeting Pope Francis in the Vatican as a moment of incredible warmth.

The Minister for Education and Skills was in Rome as the Government’s representative at the canonisation ceremony of Cardinal John Henry Newman, founder of University College Dublin on Sunday.

As part of the ceremony in St Peter’s Basilica, Minister McHugh led the Irish delegation for a brief meeting with the Pope where they shook hands.

Minister McHugh said: “It was one of those really warm encounters. The embrace, the handshake, the connection, without many words, it was just one of those moments to treasure.

“The best way I can describe it more than anything else is that it was a real warmth, a real sense of humanity.

“It felt like such a natural encounter as well. It was something incredibly warm and it was a true privilege to have been asked to represent An Taoiseach Leo Varadkar at the canonisation and to have the once in a lifetime opportunity to meet Pope Francis.”

Minister McHugh also attended a reception at the Urbania Pontifical University at the weekend which was also attended by Prince Charles and a number of British dignitaries.

Cardinal Newman was canonised after two miracles were authenticated and credited to him. The first related to the cure of a man’s spinal disease.

The second was in relation Melissa Villalobos, the Chicago mother of seven who claims that she recovered from heavy haemorrhaging during a pregnancy in 2013 because she prayed for help to Cardinal Newman. Ms Villalobos attended the ceremony.

Cardinal Newman was UCD’s first rector and president when it was founded as the Catholic University of Ireland. He served as the university’s first rector between 1854 and 1858.

He was also recognised as a poet, philosopher and historian. Newman is famed for his series of lectures which were published as the “Idea of a University”, which has influenced thought on education greatly in Ireland and throughout the world.

Newman believed in the power and potential of education to develop people in ways beyond just academic knowledge.

The more holistic view we have of education today is rooted in this belief.

“One of those moments to treasure” – Joe McHugh meets the Pope was last modified: October 15th, 2019 by Stephen Maguire
FacebookTweetLinkedInPrint