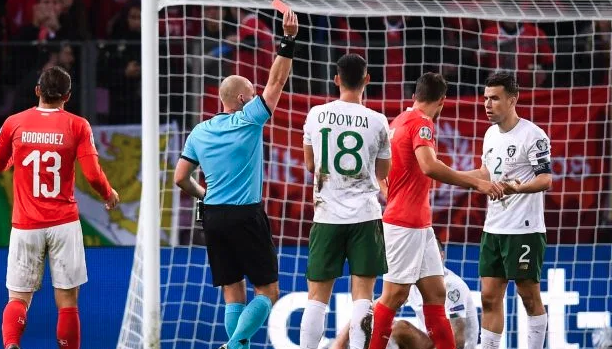 Coleman to miss Denmark clash after sending off

AS A RESULT of his sending off last night in Geneva, Seamus Coleman will miss next month’s Euro 2020 qualifier against Denmark.

Coleman, the Irish captain, was sent off for a second bookable offence in the 76th minute of Ireland’s 2-0 defeat by Switzerland.

Already on a yellow card following a first-half clash with Granit Xhaka, Coleman was penalised a second time when blocking a Breel Embolo shot with his arm.

The subsequent penalty, by Ricardo Rodríguez, was saved by Ireland goalkeeper Darren Randolph.

Haris Seferovic struck in the first half and, with the final kick of the game, defender Shane Duffy put through his own goal.

Ireland will now have to beat Denmark in November at the Aviva Stadium to qualify automatically for the Euro 2020 finals.

Irish manager Mick McCarthy had no qualms with the decision to send off his skipper.

“In this day and age yes, it’s a penalty,” McCarthy said.

“He’s got his hand in front of his face. In medieval times when I was playing it probably wouldn’t have been but it’s changed.

“It’s hit his hand, it’s in front of his head, it’s not in a normal position, so it’s a penalty.”

McCarthy said that Wolves’ Matt Doherty was now in ‘the box seat’ to take Coleman’s place and said the clash with the Danes was ‘a Cup final’.

He added: “I’d have taken that before and I’ll take it now.”