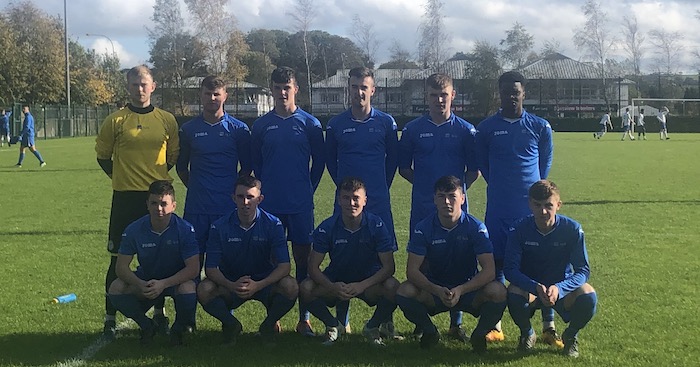 SEAN QUINN’S penalty, on 68 minutes, proved the difference for IT Tallaght on a frustrating afternoon for Letterkenny Institute of Technology.

Letterkenny Institute of Technology 0 IT Tallaght 1

Quinn slotted home 22 minutes from the end to give the Dublin students the win.

LyIT endured an agonising afternoon as they struggled to break down Pat Scully’s well-organised visitors.

IT Tallaght seemed content to put the shutters down for a draw, but that all changed midway through the second half. Tallaght caught LyIT out on a counter-attack and, after goalkeeper Jamie Bell, was adjudged to have fouled Glen Hollywood, referee Michael Connolly pointed to the spot.

Quinn stepped up to fire to the bottom corner.

Shane Byrne’s LyIT had the better of whatever half chances were doing the rounds in the first half.

McBride had a free kick, just before half timed, parried away by IT Tallaght ‘keeper Daniel Butler. A little earlier, Butler clawed away from a tester by McBride.

Last week, LyIT scored a fine 5-1 away win at Jordanstown when Banda bagged a hat-trick. Banda tried his luck here again, 12 minutes into the second half, but his attempt flew wide.

Even Quinn’s penalty didn’t spark LyIT into life, although Corey McBride did get a sight of the target in added time, be he riffled over the crossbar.

The hosts’ afternoon went from bad to worse when defender Kieran Farren was sent off after the final whistle.

LyIT are back on home soil next Tuesday when they face Carlow IT.