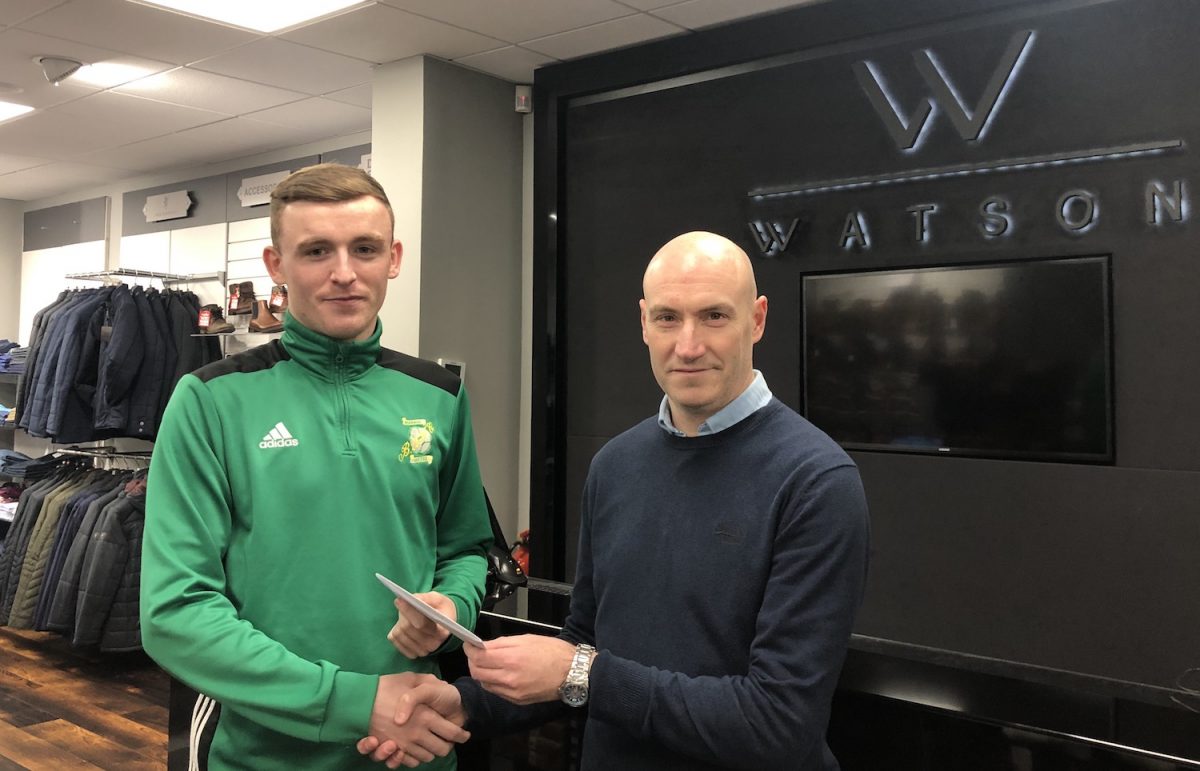 Rainey hopes Bonagee can kick on from early-season promise

AFTER AN UNBEATEN start to their new season, Ryan Rainey hopes – and believes – that Bonagee United can kick on.

Rainey is enjoying a rich vein of form with the Dry Arch Park side and has been named as the Watson Menswear Player of the Month for September.

Picture: Ryan Rainey receives his Player of the Month Award from Marty Fagan of Watson Menswear

The former Wolverhampton Wanderers prospect returned to his home club during last season and is really beginning to find his form again.

In late September, Rainey scored twice against Fanad United in a 4-1 win to open up the new bmcsports.ie Ulster Senior League season. He played a big part in a 3-0 away win over Cockhill in the Donegal News USL League Cup, a result that booked a semi-final slot for Bonagee.

“We thought this year we have a good chance to go for everything. To start and be unbeaten in the first few games is very pleasing.

“You can’t lose any early or you’re out of rhythm. To win the games and win them quite comfortably at times is quite pleasing for us as a team. Hopefully we can keep that going.”

Rainey was also on the mark on Saturday night last as Bonagee crushed Donegal League champions Castlefin Celtic in the Knockalla Caravans Senior Cup and scored a late equalising goal for the USL select against Connacht at the FAI Intermediate Inter-Provincials in Dublin.

“Dan (O’Donnell) is in there and helping me and Deano (Larkin) push on to get more goals.

“I always did play more defensive and played more in the backline. I’m playing forward now with freedom and am enjoying it. Chipping in with goals is important. I want to help the team as much as I can.”

Under Jason Gibson’s management, Bonagee won the Knockalla Cup last season and it was a campaign that offered optimism.

Rainey says: “We drew last year with Harps and we drew with Derry, but if we had won those we might have done better. There is no room for error and we need to win those kind of games this season. A big club like Bonagee should be winning trophies.

“I don’t think last year was luck. We put in a lot of work and maybe we should have done better.”

Bonagee are back on home soil again this weekend when they face Fanad United in the FAI Intermediate Cup. A place in the open draw awaits the winners and, after a heavy home loss to Midleton last season, Rainey is aiming for better fortunes this time around.

He says: “We didn’t do so well against Midleton last year. Fanad will be a tough test and they’re hard to break down. We do want to get a wee run in the Intermediate, but it will be challenging.”

In the other FAI Intermediate Cup clash on Sunday, Cockhill Celtic are at home to Letterkenny Rovers in a heavyweight tussle at the Charlie O’Donnell Sports Grounds.