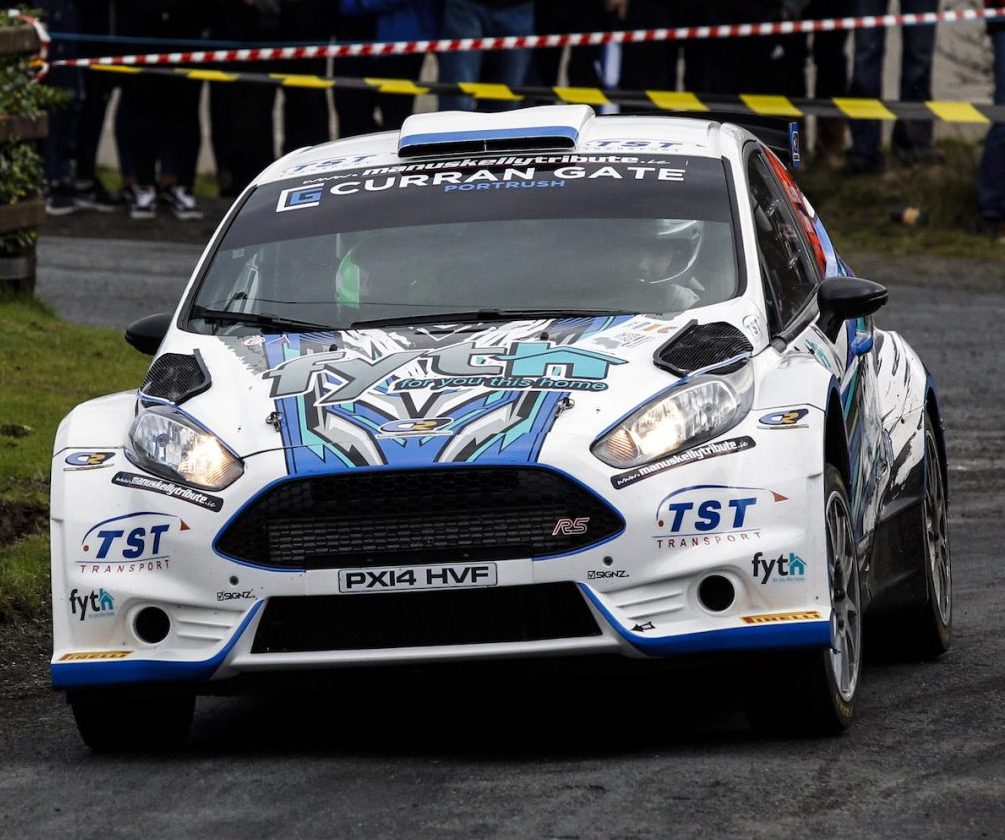 Toby Burke is the sweetest hitter of a sliotar. He was Keady’s keeper on the Armagh side that robbed Setanta’s championship hopes in the O’Donnell Park on Sunday afternoon.

He made the ball do all the work as it left the most efficient part of his hurley so quietly and travelled the longest way through the O’Donnell Park on Sunday afternoon.

From Hurley to rallying I enjoyed watching a star in the making with the same understanding of efficiency and speed, that of Callum Devine leading from the start to finish ahead of a crop of talented local drivers to win the Harvest stages Rally. 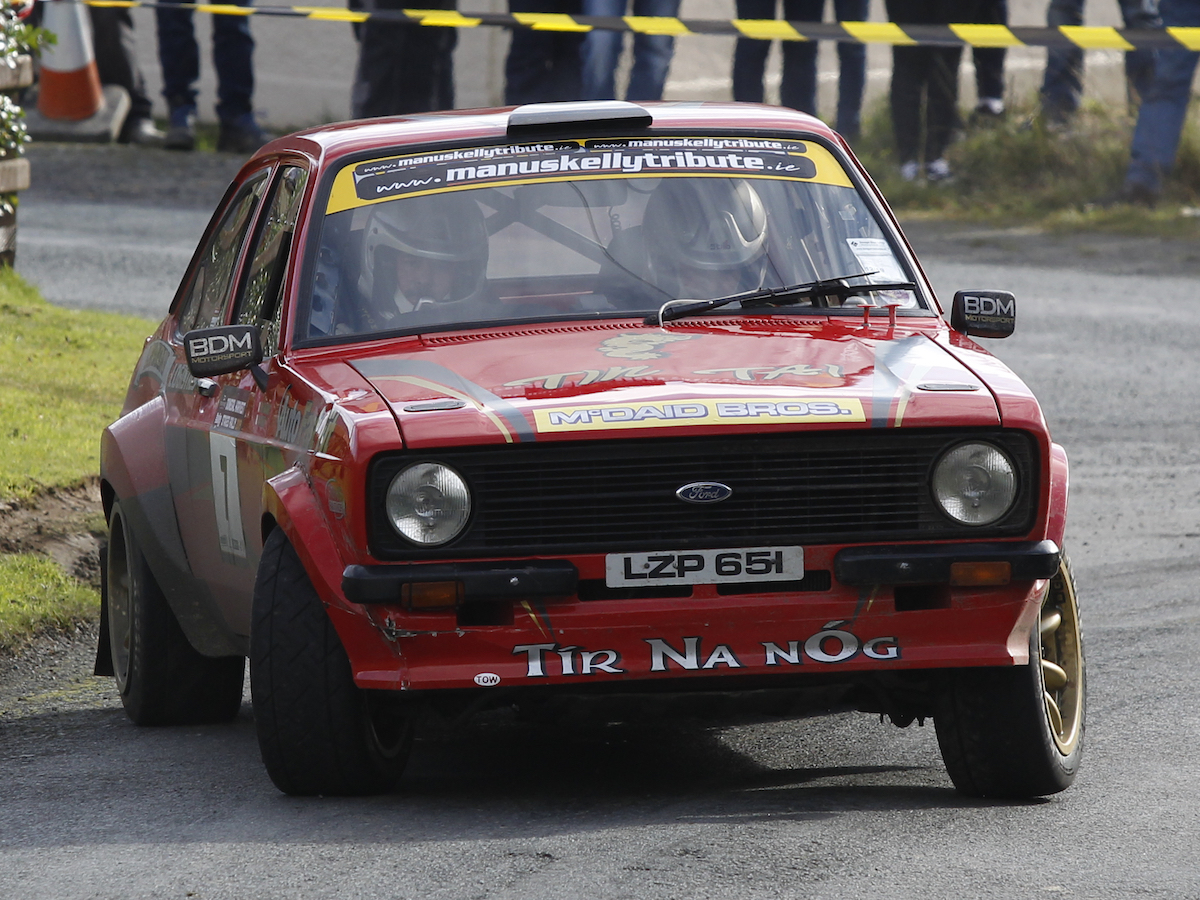 His R5 Ford Fiesta never missed a beat and was the quickest out of the box, then paced himself with a very efficient driving style carrying his speed even in the wet opening stages in the Inishowen peninsula.

Only a few months ago this talented driver was on show as Devine lead on the opening stages of the Donegal International Rally, which also started in the Inishowen area in his R5 Fiesta with even world rally driver Craig Breen in a more powerful WRC Fiesta could not reply to Devine’s pace on the first stages of the Donegal.

In another Cork registered Ford, a Moville crew complete with their fan club, waiting at the first junction on the first stage of the day. Car number 103, a Mk 2 Ford Escort driven by Daniel and Eamonn Mc Gonagle.

“That’s them now, ah nah it’s not ours, it has blue on the bottom.

“Is that them this time, aye it is….. woooooooo- hooo.

“Nah that’s not them either, they will be next,” – then a beautiful unarched white Mk2 with the word McGonagle on the sun visor and that blue on the bottom signature arrives on the first run through the very shinney and slippery surface and the McGonigle fan club start a fit of cheering as they start waving with one hand while trying to record the rally car on their phones with the other hand.

“Nah, them old round bales were in the way, We’ll move up a bit for the next time through.”

Meanwhile, another McGonagle, Joseph from just down the road in Muff looked the most aggressive though our junction in his WRC Mini. 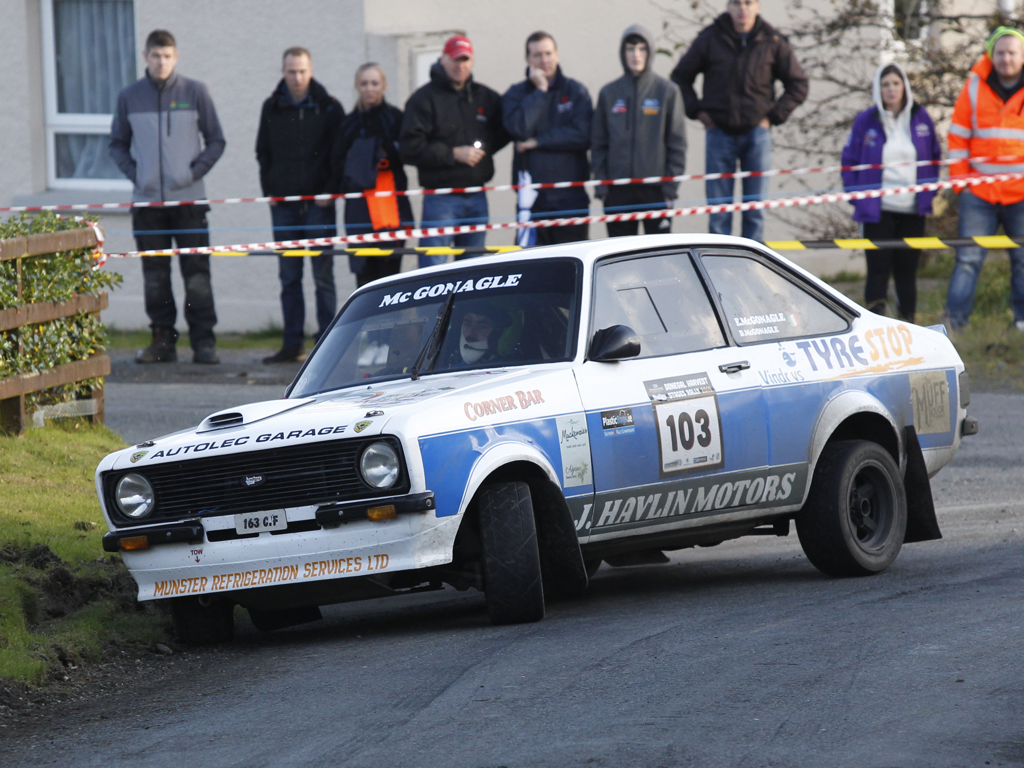 The Mc Gonagle Crew on the limit much to the enjoyment of their fans club at this junction on The Harvest Rally. Photo Brian McDaid.

That was the stage he knew the best but it was the other two stages that he would record the fastest times on.

Himself, fellow Donegal man Donagh Kelly and late entry Josh Moffet, both in new R5 Polo’s would battle it out all day for podium places.

On Saturday our viewing point at a staggered country crossroads junction transform perfectly, thanks to the marshals to a brilliant viewing point for spectators.

We could watch the cars on the limiter on a long downhill straight before they navigate their way around bale chicane into a sharpe left at the junction.

Most of the spectators were happy to sit it out between stages because of this good viewing point and wait the hour for the next loop if stages to arrive. 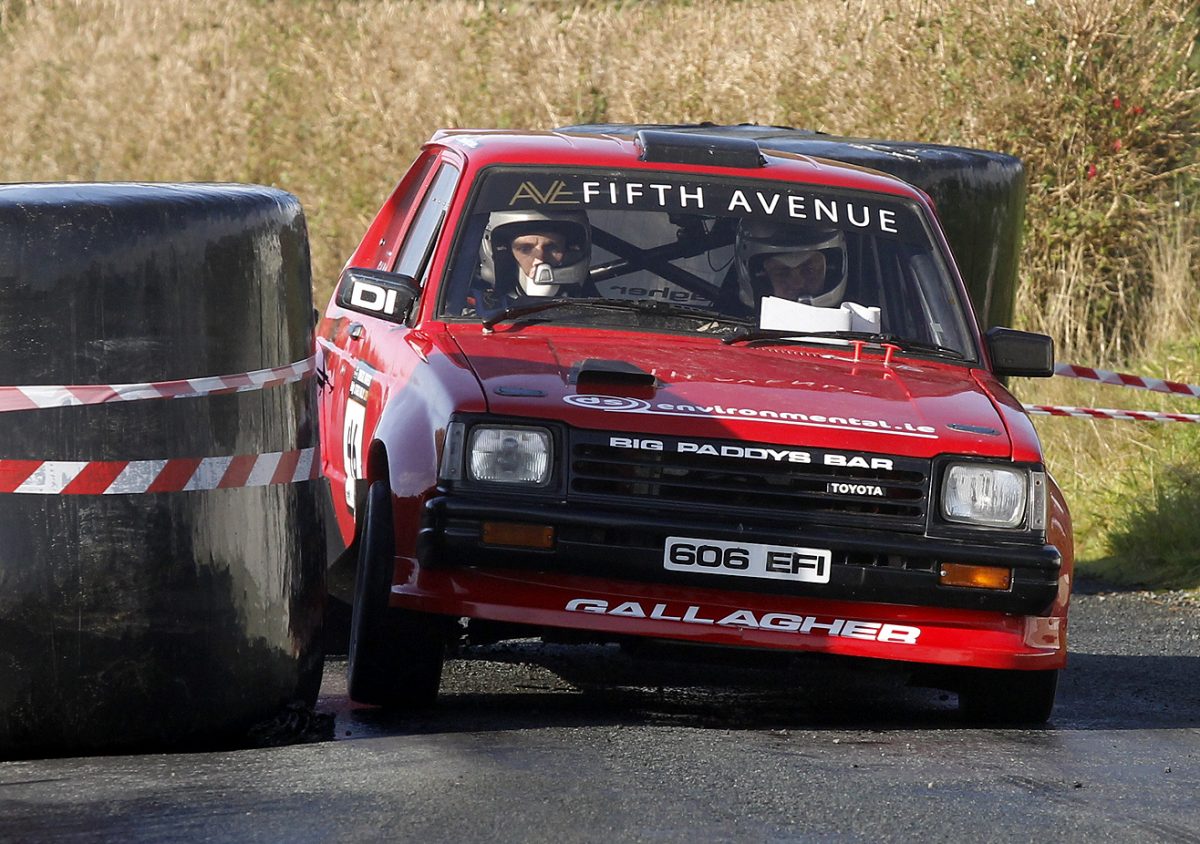 Old and new friendships were replenished and for some of us, the late Manus Kelly’s old rally car a yellow Toyota Corolla registered, 85 CE 888 passing us on the stage reminded us of just how difficult a year we have travelled through.

As our mobile phones roamed across Lough Foyle to pick up a network connection, our conversation roamed chatting about everything from Costa Coffee to Rural Electrification.

On Saturday, I met up with two school classmates Martin and Antony Kelly and also met Mac Walsh.

The four of us all had something other than rallying in common. My father Fred McDaid, Anthony and Martin Kelly’s father Gerry Kelly and Mac’s grandfather Martin Scanlon all travelled the same country roads in Inishowen that we did, sixty years before us all as workmates together with the ESB’s rural electrification taking power to Inishowen for the first time.

The battle in the nation was just as fierce with three Donegal drivers all looking for honours.

Pettigo’s Kevin Eves would have looked the favourite in his Corolla but it was the engine builder in his Darrian T90 that was the man on the pace right from the start in his unique looking rear-wheel drive, rear-engine rally car, complete with the latest in Rathmullan technology a KGP engine, a 2.7 litre power plant.

Indeed the Letterkenny crew reminded me what local one-day events are all about. 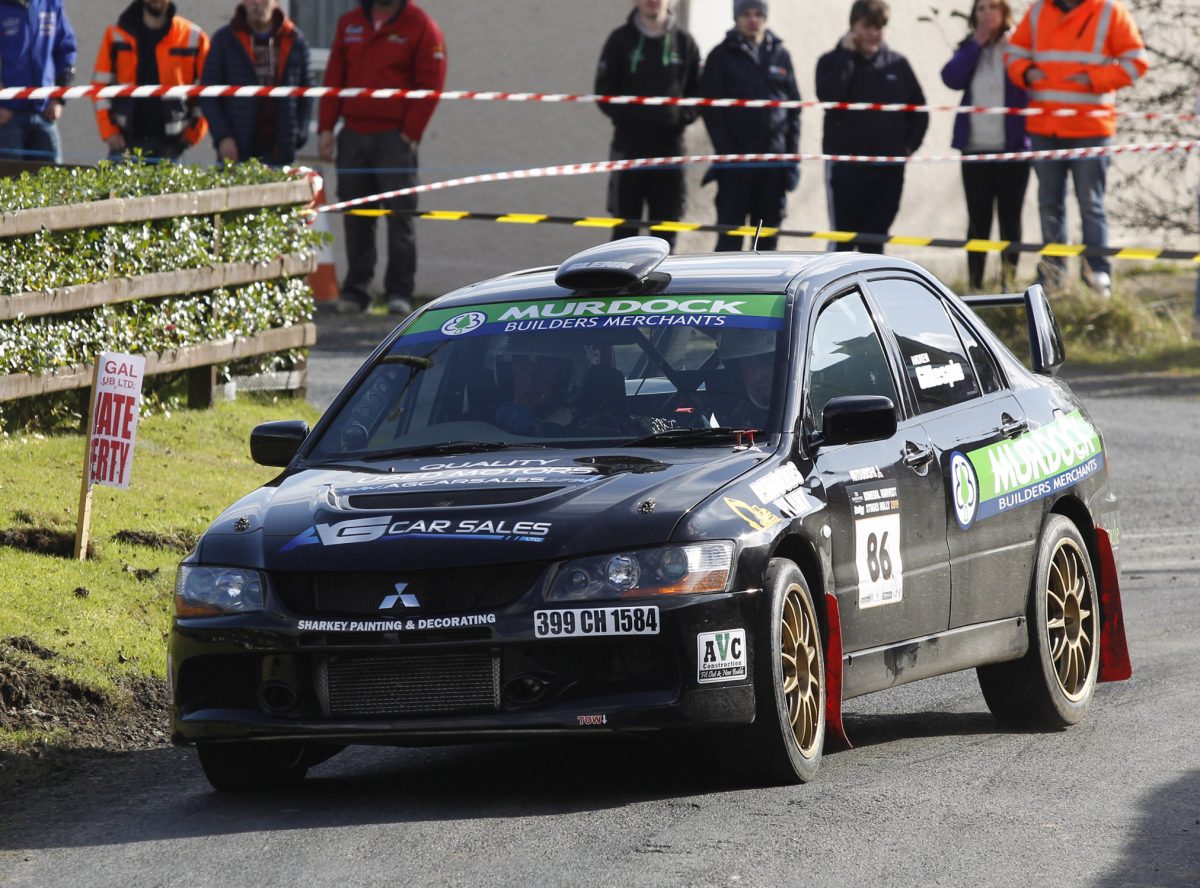 I met this crew that competed in a full day’s rallying who then stepped into their road car and hooked up a car transporter loaded their red number 7 on behind and headed home after the event, with a stop off, them still in their cream rally suits to Doherty’s chipper in Bridgend for a well deserved bite to eat as the rally car sat outside the door.

Top of the class

Christy Gallagher from Illistrin with Lee Cullen calling the notes were class winners in this Toyota Starlet even though they had a gearbox change and release bearing issues Litermacward crew Adrian Cannon and Aidan Gannon also were class winners on one of the high revving Honda Civics that took part in the rally over the weekend.

Paddy Walker and Stephen Diver from Carndonagh were the local crew that won their class with Lifford’s Alistair Glen and Andrew Gillespie wrapped up the Donegal crews to finish first in their class on the weekend event.

Along with all the competitors on the day the other winners were the Motor club and the team that run the event, the people of Inishowen who welcomed both local competitors from Donegal on no less than 16 counties from both southern and Northern Ireland to come and compete in our wee county at the weekend. 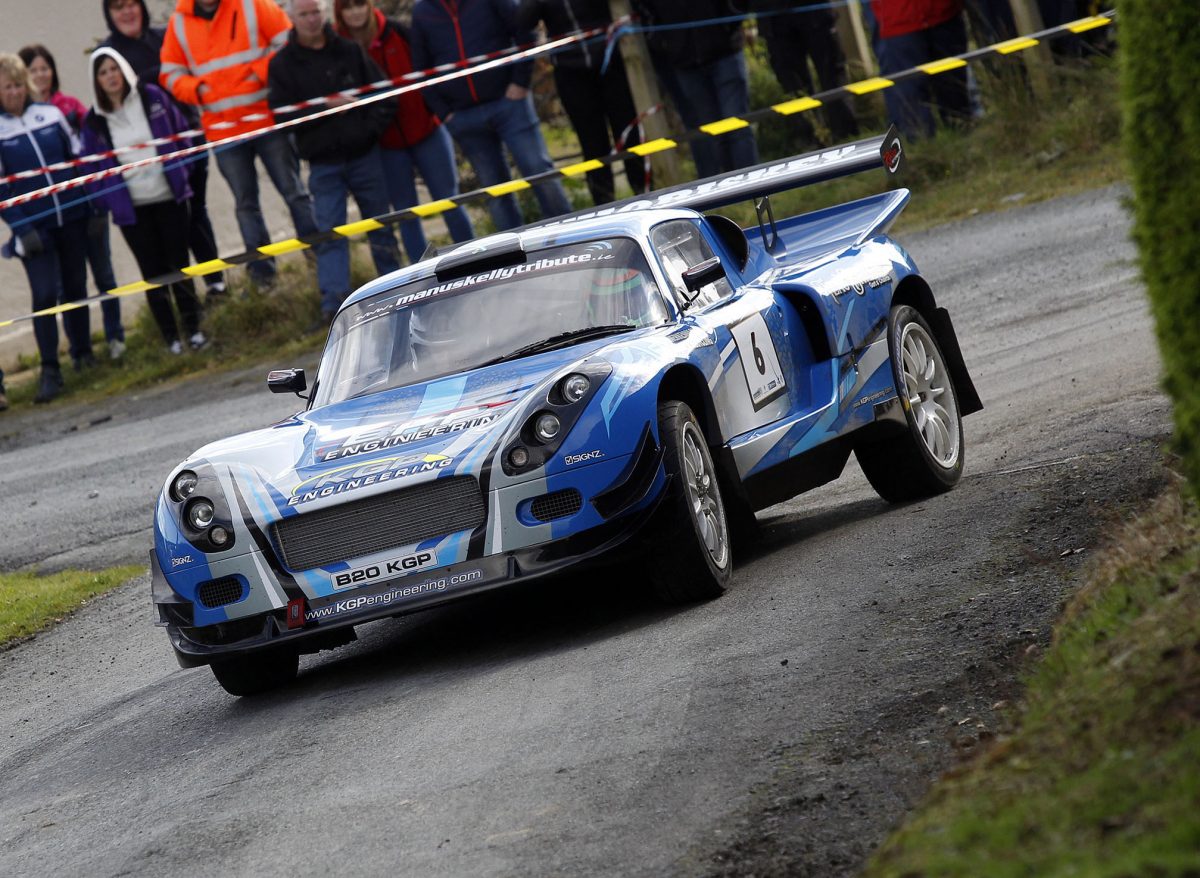 Kevin Gallagher and Gerry Conway Rathmullan. First in the Nationals in the Harvest Photo Brian McDaid

Even the local competitors that didn’t do the Harvest were out in big number marshalling setting a wee crop of winter points that might yield results at entry time come Donegal International in 2020.

And finally our fan club who cheered the Moville crew through each of the loops of the rally on stage one, four and seven were rewarded with a fourth in class for Daniel and Eamonn Mc Gonagle, with just some minor trips off the tar much to the cheers to their fan club to put a great finish to a great day.