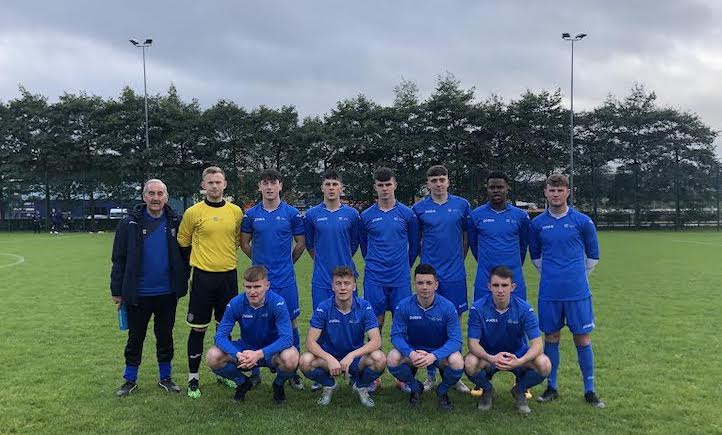 A CRACKER from Sean McBride, who scored twice, set Letterkenny Institute of Technology back to winning ways this afternoon.

Letterkenny Institute of Technology 3 IT Carlow ‘B’ 2

McBride’s stunning strike, nine minutes into the second half, put Shane Byrne’s side in command against IT Carlow ‘B’ at the Port Road.

McBride had drawn LyIT level in first-half stoppage time, after Kieran Hennessy had put the Carlow side ahead against the run of play in the first half.

Early in the second half, after the hosts had come out of the traps well from the interval, McBride struck gold.

Spotting a gap, with Kelan Gaffney, the IT Carlow ‘keeper, off his line, the Cappry Rovers attacker could hardly have picked his spot better. A beauty of a hit nestled in under the connect of post and crossbar.

From the moment the ball left his instep, it was only heading one way and Gaffney could only watch with a mixture of awe and horror.

McBride’s first was a cool finish, with almost two minutes of added time played at the first half, steering home to the bottom corner after a good move involving BJ Banda and Lee McLaughlin down the right-hand side.

LyIT, bidding to bounce back from last week’s loss to Tallaght, had an early opening for Pat Loughrey, but his first-time shot was blocked.

LyIT were without Stephen Doherty and Kieran Farren, but the addition of Joel Bradley-Walsh proved a Godsend with the young Finn Harps prospect standing tall over the 90 minutes. A magnificent tackle to dispossessed Aaron Morris in the 10th minute set the tone for his afternoon.

IT Carlow, however, hit the front on 19 minutes when Hennessy fired over after he pounced when Keelin McGill dallied in taking a touch inside his own penalty area.

Banda hit the side-netting as LyIT tried to shake the heads clear.

Fionn McClure tested Gaffney and it seemed as if the visitors would frustrate until McBride hit the leveller.

Connor Gormley shot over the top early in the second half while Banda drew a smart save from Gaffney.

McBride put LyIT in front and they quickly added a third when Banda tucked home after Loughrey saw his effort parried by the goalkeeper.

Corey McBride couldn’t hit the gaping goal with a chance to seal the deal completely.

Sean McBride went for an ambitious effort at a hat-trick, but curled wide.

IT Carlow didn’t give up and Jamie Bell, the home net minder, had to be alert to save from Hennessy and Aaron Donnelly, a sub, fired wide from a promising position.

Banda ought to have wrapped it up, but he curled over from 12 yards and the nerves jangled a little when Hennessy netted his second from close range.

It was too late to really trouble LyIT, who were rather more comfortable than the final score indicated.