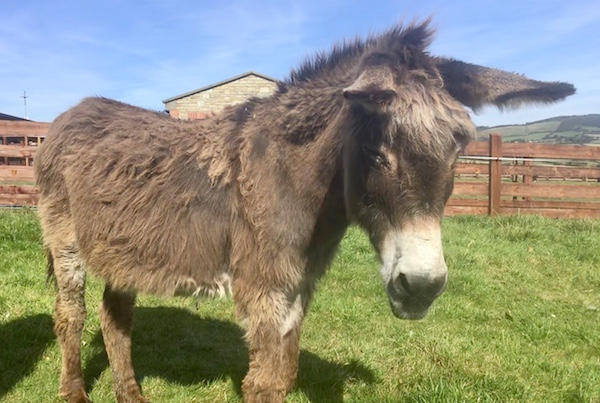 A partially blind donkey found wandering on the side of a hill has been saved by a Donegal charity which hope to help him see again.

Barney the donkey was found in a terrified and disorientated state in a field in Northern Ireland recently by two ladies.

The women cared for Barney for a few days before they contacted the Donegal Donkey Sanctuary in Raphoe.

For the first number of days the terrified creature would not interact with other donkeys or staff.

Sanctuary staff quickly spotted that he had a severe problem with his sight and cataracts were diagnosed following ultrasound investigations and blood tests.

Barney was deemed suitable for surgery at an equine clinic in England which he has just undergone.

He will need to spend a minimum of 10 days in Intensive Care at the clinic following the surgery and vets are hopeful he will see once again.

This along with travel costs and aftercare will place extreme pressure on the Donegal sanctuary’s funds with the onset of winter feeding bills for the other donkeys in their care.

Owner of the Donegal Donkey Sanctuary, Danny Curran, said Barney has obviously been “through the mill.”

“It is a particularly harrowing story as Barney is very anxious around people so has obviously been subjected to cruel treatment in the past.

“The sanctuary feel that his situation is especially tragic as he would have not been able to see the individual who perpetrated this treatment approaching and lived his entire life in a state of heightened terror which he is still suffering from.

“Donkeys are incredibly empathetic creatures and one of the other resident donkeys has been acting as a guide donkey for Barney who follows him around the paddocks.”

A ‘Gofundme’ page called ‘Help Barney See’ has been set up and can be found on the sanctuary Facebook page or clicking into https://www.gofundme.com/f/help-barney-to-see

Alternatively, donations can be made via PayPal on the Facebook page found by clicking on the ‘Learn More’ button or by cheque or postal order sent directly to Donegal Donkey Sanctuary at Castledooey, Raphoe.

The sanctuary would be extremely grateful for any help offered.