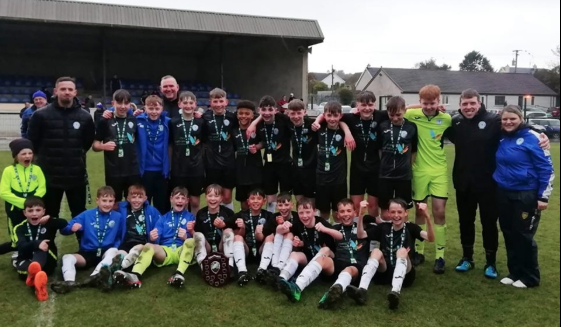 Finn Harps U13s came from a goal down to defeat Shelbourne and lift the First Edition of the U13s National Shield.

By Stuart Connolly at the Diamond Park

Jack Byrne converted a first half spot kick as Shelbourne went into the break with the lead but a brace from Shaun Patton, the second of which came from the spot, and a late Aaron McLaughlin goal sealed the victory for Finn Harps.

Kevin McHughs U13s amassed a total of 71 goals in their 25 competitive League fixtures, an impressive return and fashioned the first chance four minutes in, Liam Carlin firing over from range via a free kick.

The weather forecast was a miserable read in the early hours of the morning and the inevitable downpour soaked the pitch with the game still in its infancy.

The trio of Rhys Brennan, Calum Bridgeman and Lewis Jacobs combined well to carve Shelbournes first opening, Jacobs got the final touch but saw his effort just inside the area trickle into the gloves of Killian Hagan.

The visiting supporters travelled in their numbers and in true away days spirit were well equipped with air horns.

Shelbourne enjoyed a good spell of play as the game wore on but the slippery playing field made it difficult for players to turn quickly.

Bridgeman was lively in the first half, causing a few problems for the Harps defence with his passing and he also saw an effort on goal blocked by Ciaran O’Kane at close range.

In the last action of note in the first half, Shelbourne took the lead.

Hugh Smith was impeded inside the area by Shane Ellison and a spot kick was awarded, Jack Byrne stepped up and coolly slotted home.

Carlin played a short ball to Martin Coyle and he whipped it in low for Patton to net his 21st goal of the campaign.

The hosts were on top after that equaliser and could have been in front approaching the hour, but the crossbar thwarted a close range strike from Patton.

Five minutes after the hour and Harps’ persistent pressure paid off, as they were awarded a penalty of their own due to a foul by Harry Taylor on Shaunie Bradley.

And make that 22nd goals for the campaign as Patton put it away to give his side the lead.

Shelbourne looked for anything to get back into the match as it neared its endgame but were sucker punched as Harps doubled their lead to seal the win.

Patton turning provider for this goal, finding Aaron McLaughlin just inside the area before the pacey winger calmly finished past Enda O’Carroll.

Shelbourne had a number of late corners in quick succession in a bid to force a tense finish but Harps stood firm to end their season on the highest of notes.