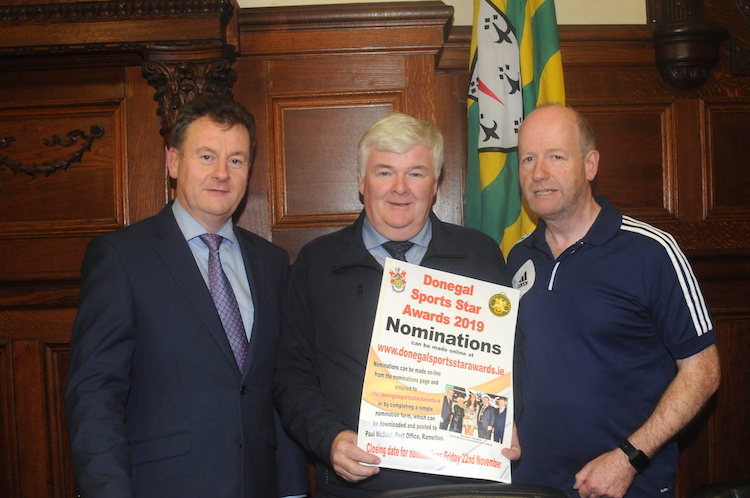 Donegal Sports Star Committee have this week opened nominations for the 2019 Awards.

This year the committee took nominations for the schools awards first and that deadline passed last Friday.

Picture: At the launch of the 2019 Donegal Sports Star Awards in  Lifford were Chief Executive Seamus Neely and the Cathaoirleach Cllr Nicholas Crossan representing the exclusive sponsors Donegal County Council along with the Media Officer for the Awards Declan Kerr

So it’s now time for all sporting organisations to submit their successes at county, provincial and national level as well as achievements abroad.

The deadline for nominations is Friday 22nd November.

Donegal Sports Star Award Chairperson Grace Boyle said that 2019 had been another successful year for sport in the county.

“There has been loads of sporting achievements by individuals and teams from Donegal right through this year,” she said.

“I would now ask sporting organisations and others to make sure that nominations are made to recognise the really great successes that we have all witnessed during 2019. It’s not all about success we also acknowledge the volunteerism that goes on behind the scenes that helps make clubs and individuals successful.”

Last year, excluding the schools section there were in the region of 35 categories and it’s expected to be around the same number this time around.

The Hall of Fame inductee will be chosen by the Donegal Sports Star Awards committee so no nominations are being taken for this category.

Donegal County Council are once again the exclusive sponsors of the Awards.

The Cathaoirleach Cllr Nicholas Crossan and the Local Authority’s Chief Executive Seamus Neely are also encouraging all sporting organisations to get their nominations in before Friday, 22nd November.

Shortlisting of nominations may be used where necessary.

Nominations can be made online from the nominations page, by email to info@donegalsportsstarawards.ie. or

For further information on the Donegal Sports Star Awards go to donegalsportsstarawards.ie or visit Facebook Donegalsport Starawards and Twitter @DLsportstars.