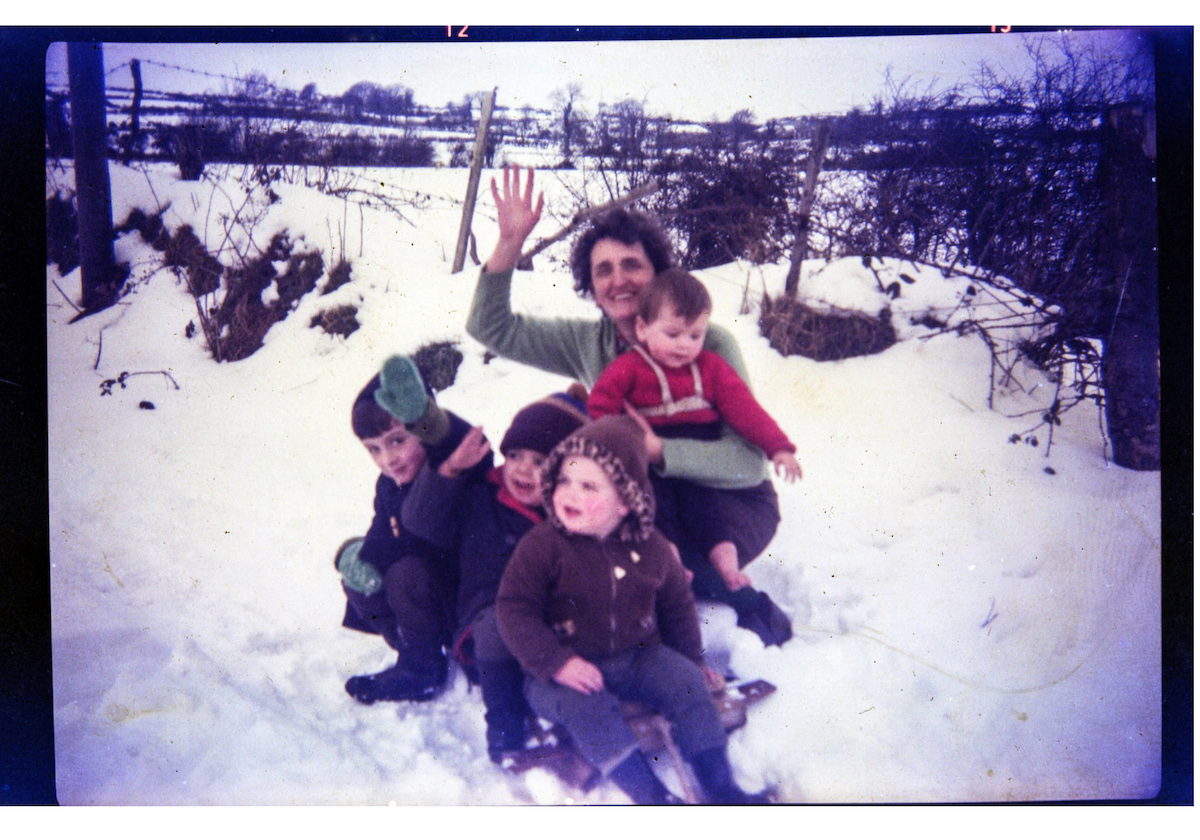 DD Motoring: A story of pictures with Brian McDaid

Fifty-one years later plus one hour, my print finally arrives. That was no fault of our local photo lab, Magee’s Chemist, by the way.

It is now the second generation of the McCormack family and might even be called McGee since the first roll of AGFA film was left in for developing. 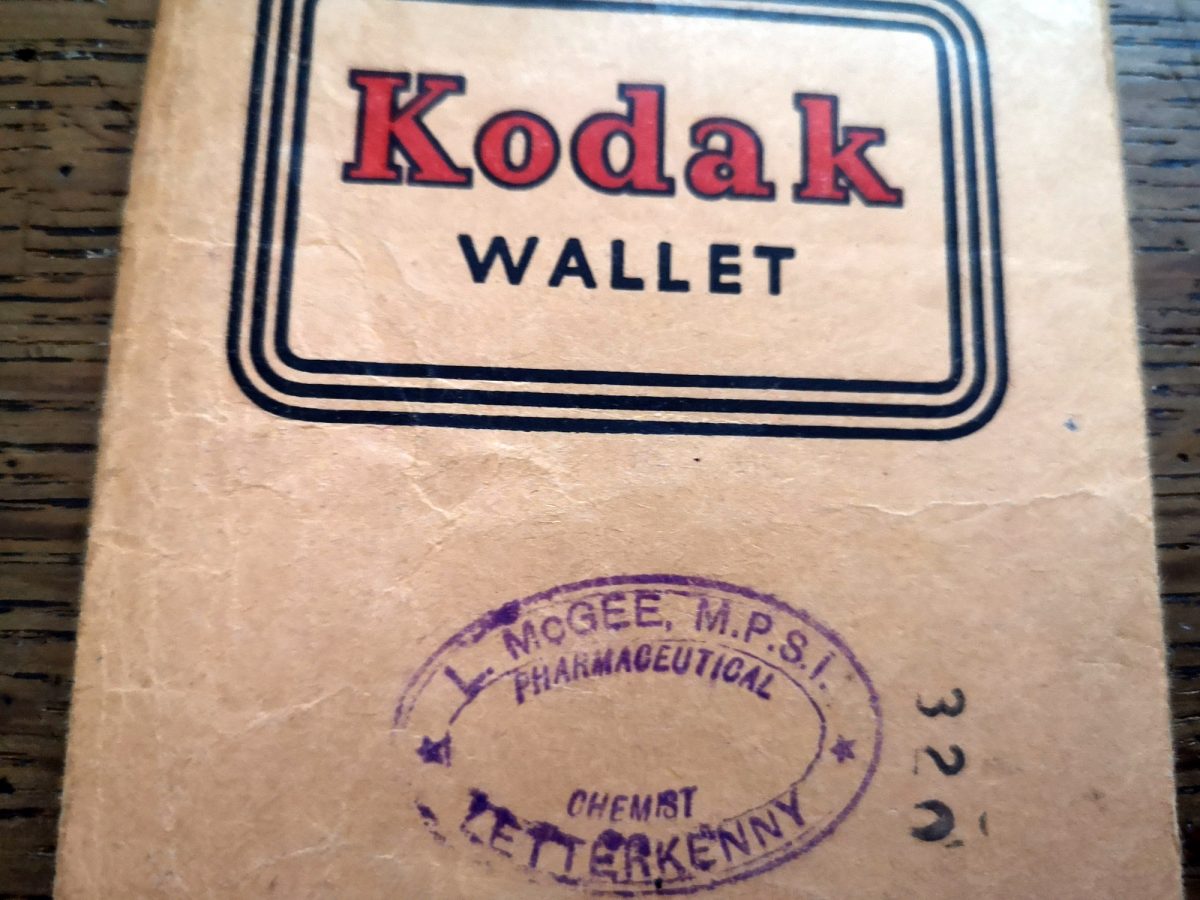 A Kodak wallet from Magee’s when it was called McGeein the days before the Late Jim McCormack took over the chemist and photo lab. Photo Brian McDaid.

In 1968, It cost two shillings to develop the roll back then and a note back with the negatives to say some of the photos didn’t come out.

The old AGFA Box camera that captured the pictures at one-fiftieth of a second in those days and was only able to get seven exposures on a full roll of 120 Agfa film, but must of malfunctioned resulting with only five and a half prints coming back with the film with a note from the developer that final exposure was not suitable for first quality printing.

The final exposure was that of the photographer who handed the camera over so they could be included in one picture with their family.

Mary Ellen McDaid with her four boys including Brian, Nelius, Cathal and Peadar in a photo that never was printed 51 years ago when it was taken. Photo By Fred Mc Daid.

Some 40 years later and after the death of my uncle Fr. Mark Coyle, I was asked if I wanted a box of old army photos that he had from his years he served there.

For the most part, I know very few faces in this box of photographs. My only connection was that I knew the person that stood behind the camera lens to capture these images.

He was part of the 62th Battalion of the Irish Army who went on peacekeeping duties to Lebanon in the 70s and 80s. He was the battalion’s Chaplin.

I took the box and after taking a look through all the packets of photos developed in photo labs all over the Lebanon and Ireland I soon realised that these photos were all missing something – the voice of the person that took them, my uncle the late Fr. Mark Coyle.

He could have told me the story behind each of these images as only he could do so well.

In through them pictured was a sprinkling of photos of his own family, which must have travelled everywhere with him.

Wind the clock on ten years to last weekend to a student who has spent his last three years in college in Galway and who was the wane in our family and complained on his weekend home that our sitting room, which was getting a fresh coat of paint, had everyone’s photo up on the wall but himself.

With a photographer in the house, the blame was placed the square in my lap.

Armed with an old box of photographs printed in the film days were dusted down and soon a the prodigal son’s photos were located and a few were selected to go on the wall and peace was restored.

Browsing through this box, I notice a red photo folder and looking inside just and empty but in the front was a sealed section I could see the corner of a negative where the paper had started to tear.

Knowing that these were not my negatives I figured they must have ended up in our box of negatives instead of the box of Fr. Mark’s army negatives.

Opening the front, I found an old colour negative with a note from a photo lab stating: “These prints have being made by special request from negatives not suitable for first quality printing.” 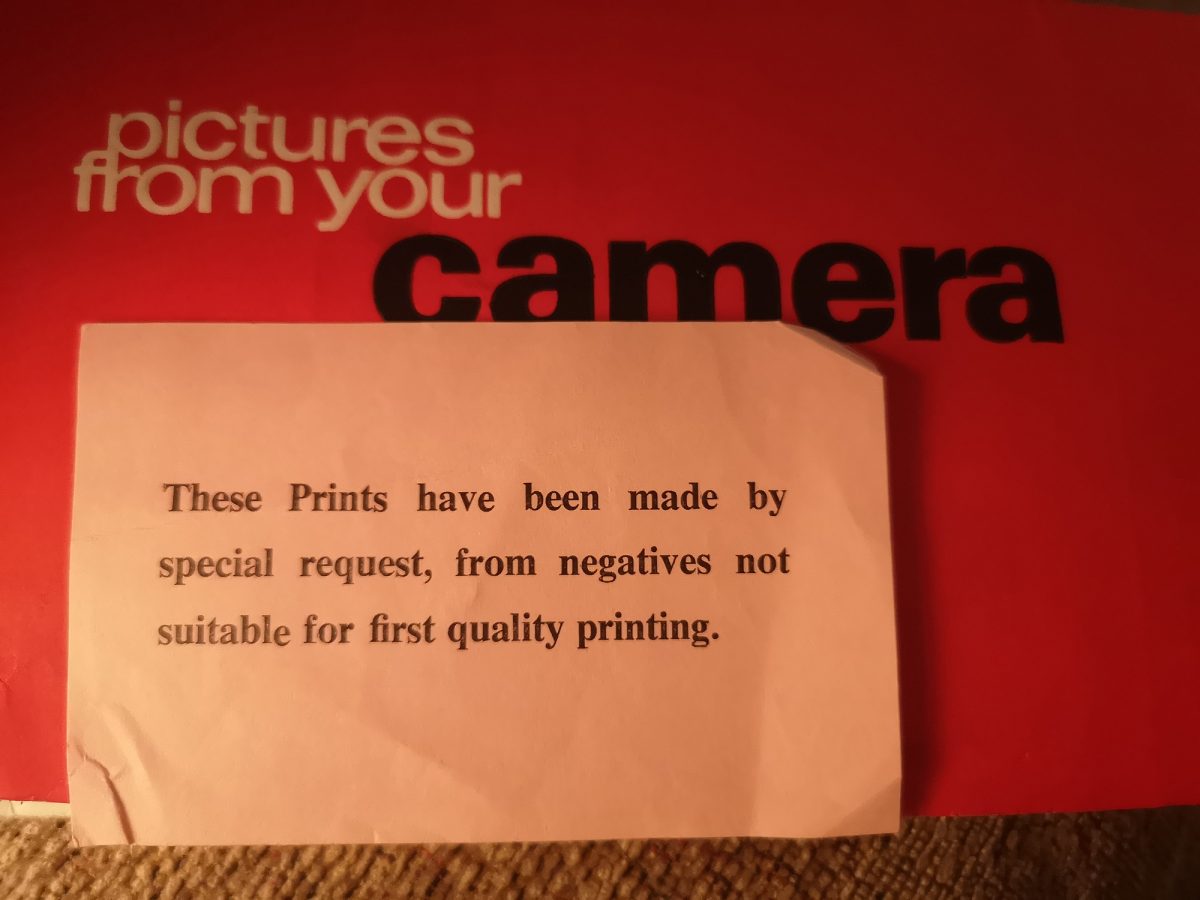 A note form the photo lab with news that some of the photos didn’t come out. Photo Brian McDaid.

As soon as I put the negatives up to the light I could see the image of my mother waving out at me.

The was two reasons that I instantly knew this was my mother on this negative. Firstly I can still remember the day this photo was taken at the back of our home in Wolfe Tone Place as I was in this picture with my three younger brothers, Neilus, Cathal and Peadar.

The second reason was that we always had the four small photos in our house that were taken in the snow back in 1968 at that same time.

To put this photo in perspective, there was never a photo of my mother with her children in it to this negative turned up at the weekend.

As I gazed through the underexposed negative late on Saturday evening the clocks were going back one hour but my heart was going back decades.

Over the last 51 years, I have often wondered if this memory in my mind of this image of us all sitting on a sleigh at the back of our house happened at all or was it created in my mind to match the photos we already had.

On that day, I can remember my mother handing the camera to my father and them swapping for a photo with the wanes out in the snow.

And now because Fr. Mark had these negatives the camera quite possibly could have been his and my mother got a loan of it to get photos of us in the snow.

We always had just the four small prints from that time in the snow, one of a group of us out at a big snowman we made in the green.

In it, was my father and three brothers Neilus, Cathal and Peadar, my three cousins Paddy, Brendan (Herbie) and Josephine McDaid and my next-door neighbour Trevor Tease, he’s the one with the snowball sticking on top of his hat.

And in another one, we are sitting on the sleigh and one taken at the front door with Neilus showing off his new bike with a bell flashy hub caps and red wheels. 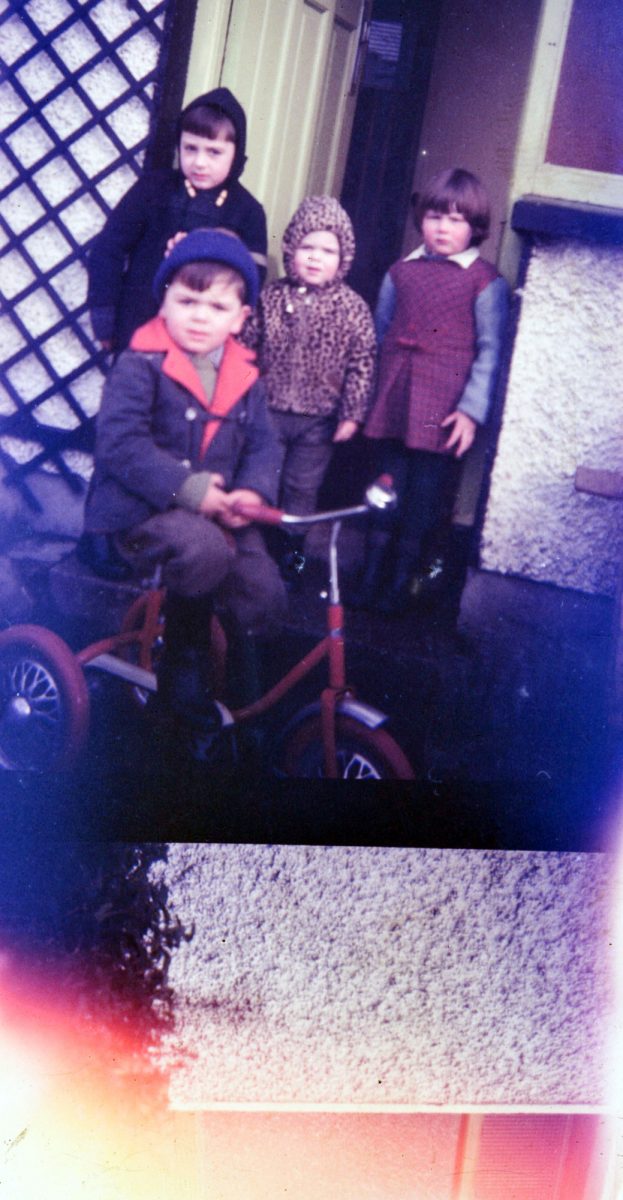 Style council at the from door of 27 Wolfe Tone Place all posing for their photo. Pictures By Mary Ellen McDaid.

On Sunday morning I turned the scanner up full and brought the old negative from film to digital form. In with the negative in the flounder was two Relics of St. Martin folded into two Lady of the Rosary of Fatima prayers.

The negative wasn’t that bad but I was still nervous working with it.

Bringing the image up on the screen in negative form, I inverted the negative to a positive state and the photo that was taken 51 years ago appeared to me for the first time.

I didn’t imagine it after all. this did happen, there we were happy as Larry sitting waving to the camera, Just as I remembered it. 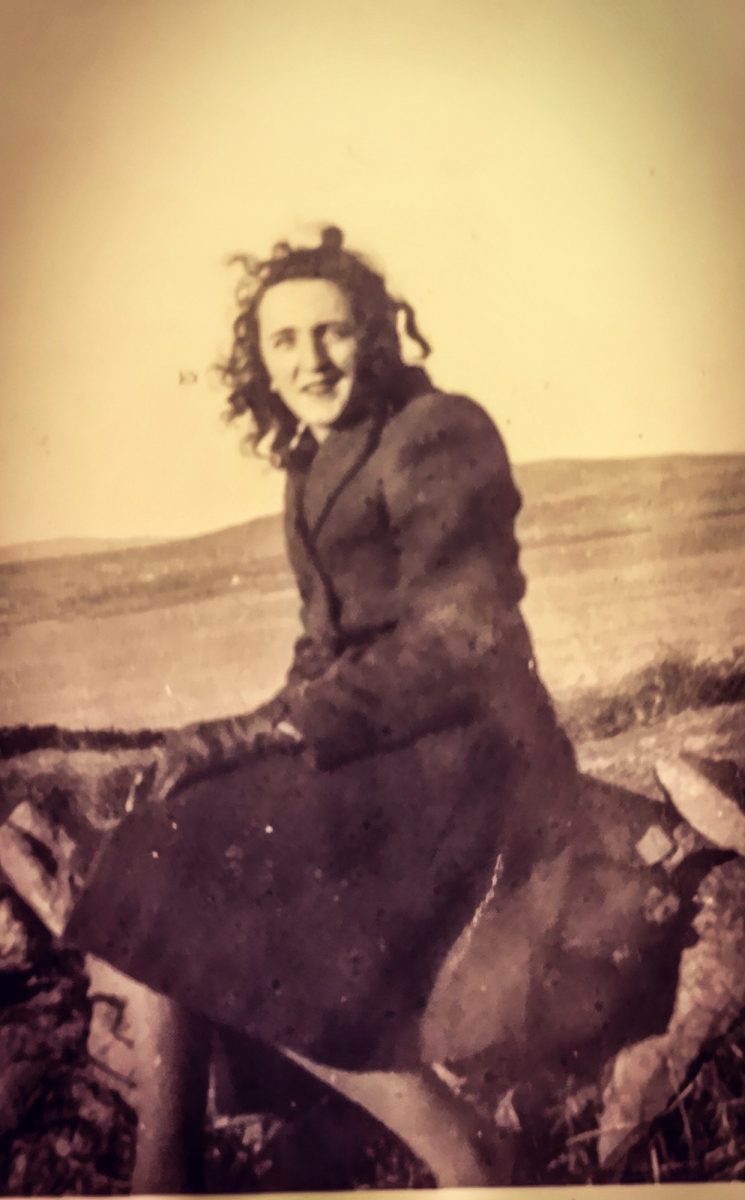 A pictured of a very young Mary Ellen Coyle one of the family photos that Fr. Mark Coyle had in his box of photos.

The digital print of our negative was sent back to Magee’s this week for printing and we patiently awaited the results.

Back in 1968, sadly things changed quickly after these photos was taken, My mother was only just out of hospital weeks before this and was still awaiting test results.

In 1969 her health went downhill fast and spent a lot of time between Letterkenny General Hospital and St. Vincent’s Hospital in Dublin.

And in that time maybe Fr. Mark tried to see if these negatives could be enhanced this negative in some way so he could have a print to give to his sister Mary Ellen with her children while she was terminally in hospital.

I hope that did work out that way because it wasn’t that hard to make a print for this long lost negative this weekend. 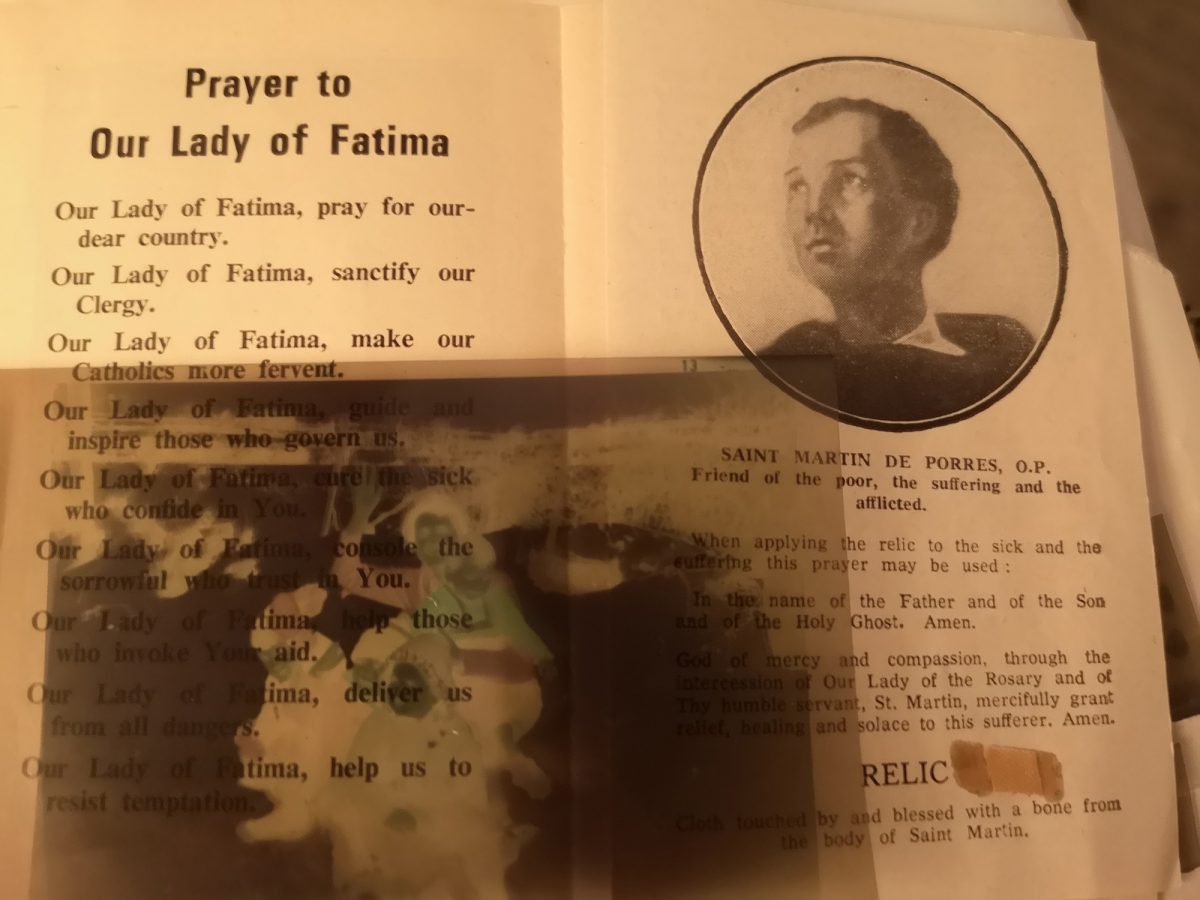 The missing negative with four prayers and relic inclosed from a photo taking in 1968. Photo Brian McDaid.

Anyway – if it wasn’t for her grandson complaining we might never have found the long lost negative, that in the end up found us.

It produced four prints to go with the four prayers and relics be it my mother or Fr. Mark, they will go on the next leg of the journey with the four prints, which I will share out with my three brothers, (now you know what you are getting for Christmas boys). 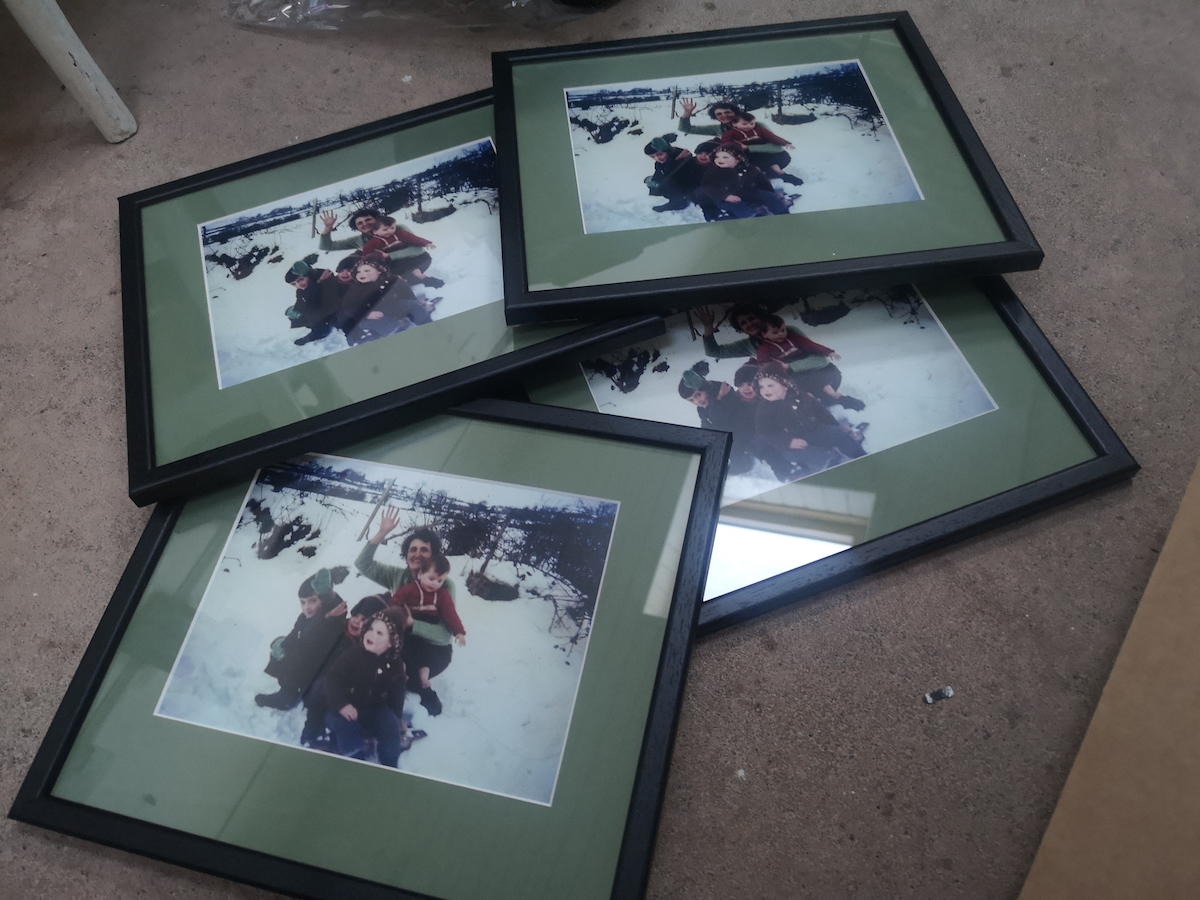 Four framed prints for for son of a photo of them with this mother taken 51 years ago.

This week was the most enjoyable piece of discovery and photography that I have had since I started this profession.

I suppose as children growing up surfing the pain of losing a parent, we didn’t see the pain that Fr. Mark was going through losing his sister, they were the closest of friends long before we ever came along as a few pictures of them even longer back also in Fr. Mark’s Army box show my mother as a young girl all dressed up in all the style and a very young picture of Fr. Mark with a small bird sitting in his hand.

I have enjoyed my profession as a photographer all of my life and I still get a buzz from it every time I press the shutter, but fining this photo this week after knowing about it for 51 years surpasses everything.

Yesterday morning, at 10am I was a proud as a son to collect the prints that my father took of my wife and my mother with her and her brothers, the negatives, which were looked after for a half a century by my uncle, the late Fr. Mark.