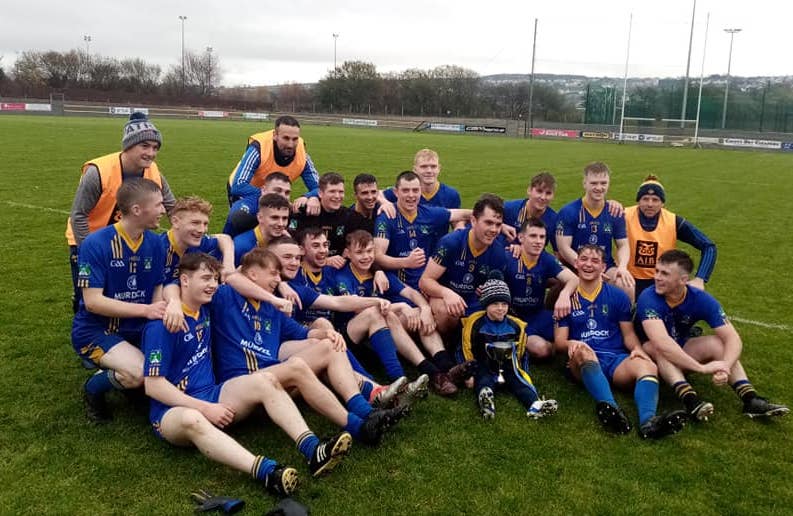 THREE GOALS either side of half-time saw Burt defeat derby rivals Naomh Colmcille in the Under-21 ‘C’ final at O’Donnell Park.

The game was finely-poised, with Burt just having got their noses in front at 0-4 to 0-3, when they hit the opening goal in the 29th minute.

McElhinney stood over a free just shy of the ’45 and his kick, into the clubhouse end, dropped short. McNamee watched in horror as the ball looped over his head and fell into the net. McNamee was deputising for Matthew Whoriskey, their regular net-minder, who is on holiday.

Three minutes into the second half, O’Donnell poked home after McNamee saved from Aaron Doherty.

With Naomh Colmcille still reeling from that concession, Burt had the ball in the net for a third time when Matthew Doherty’s shot from 40 metres flew to the net.

All of a sudden, Burt were ten points up and it was a long way back for Naomh Colmcille. Too long.

Burt spurned a handful of good chances in the first 20 minutes, including three frees that ordinarily would’ve gone into the notepad.

At that stage, they trailed 0-3 to 0-1, with McElhinney’s tenth-minute free their sole score.

However, they were level when Matthew Doherty clipped over a neat score off the left foot and Ciaran Bradley immediately followed up.

Those pair of scores, inside a 50-second spell, had Burt level and they hit the front for the first time when Jack O’Brien popped over.

The goals firmly turned the tie in Burt’s favour.

Naomh Colmcille had Kevin Gallagher and Reece Duncan black-carded in the first half and they hit a first point in almost half-an-hour when Stephen Gallagher boomed over a free.

Calvin Gallagher, Conor Carlin, Ciaran Bradley and Jack O’Brien were on the mark as Burt kept the board ticking and, late in the game, McNamee did well to save from Carlin, who bore in on goal from the right-hand side.

In added time, Brendan O’Donnell had a chance of pulling a goal back for Naomh Colmcille, but joy powerful effort was saved by Ciaran Brady, the Burt ‘keeper.