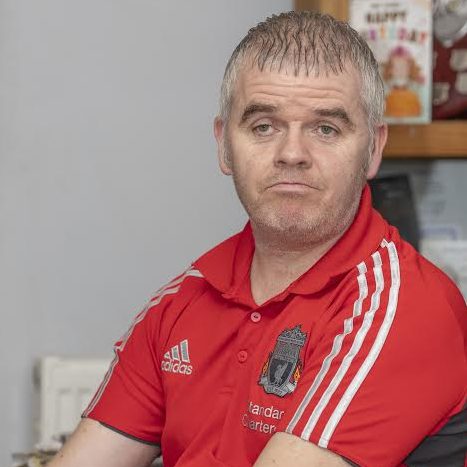 That was part of a touching tribute to die-hard fan of Liverpool Football Club, Paul Dillion – or better known to his family and friends as ‘Diddler’ – who was featured in Liverpool’s matchday programme for the match against Tottenham Hotspur at Anfield on Sunday last.

The 45-year-old father-of-three from Ballybegley passed away in September after a short battle with Motor Neurone Disease.

During his funeral, some of them carried their brother, friend and colleague to his final place of rest as You’ll Never Walk Alone – the anthem of his beloved Liverpool – rang out.

And on Sunday last, thousands of fellow Liverpool fans got to read a poignant tribute about the loving father, the athlete, the butcher, the GAA coach, the anything and everything to those who knew him.

Concluding, the tribute read: “Cheering the Reds always, he will be sorely missed by his family and friends. YNWA.”