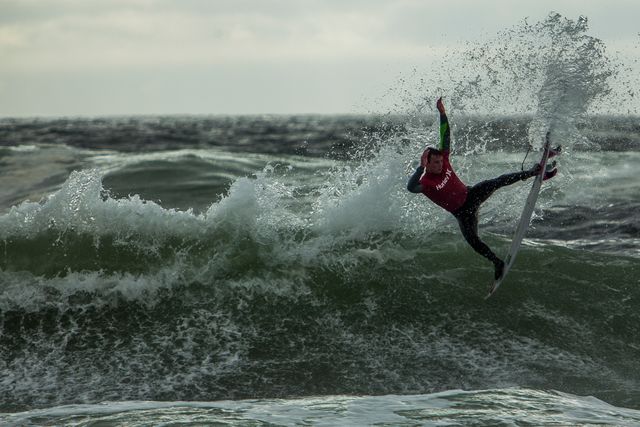 Ireland’s Surf Capital Bundoran will once again play host to the Celtic Cup surf competition this weekend when the Scottish Surf Team will compete against the Irish Surf Team.

The Irish will be fighting to retain the cup having won it for the past two years (2018 in Scotland and 2017 in Bundoran).

The competition now in its third year since it was reinstated in 2017 alternates its venue each year between Ireland and Scotland and this will be the second time it has taken place in Bundoran. The Celtic Cup is the nickname for the “Ireland v Scotland Perpetual Trophy”.

Irish Surfing, along with host club Bundoran Boardriders are looking forward to welcoming their Scottish friends for a fun weekend of surfing and the legendary Irish hospitality.

The Irish and Scottish teams gathered in Bundoran in 2017

Owen Murphy, Chairperson of the club said: ‘We’re delighted to host the event again and look forward to a fun weekend of surfing in and around the various breaks in Bundoran – the conditions that we have here are fairly similar to those of our guests’ home break of Thurso so there won’t be any major surprises for them. Many of the competitors will have been here two years ago so they’ll be familiar with what Bundoran’s waves have to offer.  We would also like to acknowledge the contribution of our sponsors Malin Waters who are supporting the event financially and thank them for their backing.’

Mark Boyd, Secretary of the Scottish Surfing Federation and Scottish Surfing Champion says the Scots are excited for a return to Donegal. ‘We had such a blast two years ago and we can’t wait to return to Bundoran for this annual competition. We have such an affinity with the Irish and the competition is more about having fun than being competitive. In 2017, the waves and the hospitality were unforgettable but this time we’re hoping to bring the cup home to Scotland!”

Bundoran Tourism Officer Shane Smyth added his welcome to the Scottish team. He said: ‘It’s great to see another event become a regular one on the calendar, particularly in the winter months. I would like to welcome our Scottish friends back to Bundoran and wish all the competitors the best of luck and hope you have a successful event this weekend.’

A full weekend of surfing and entertainment has been lined up for the two teams which will culminate in a gala dinner on Sunday night when prizes and the all important Celtic Cup itself will be presented to the winning team.

It was a Full House for Termon...