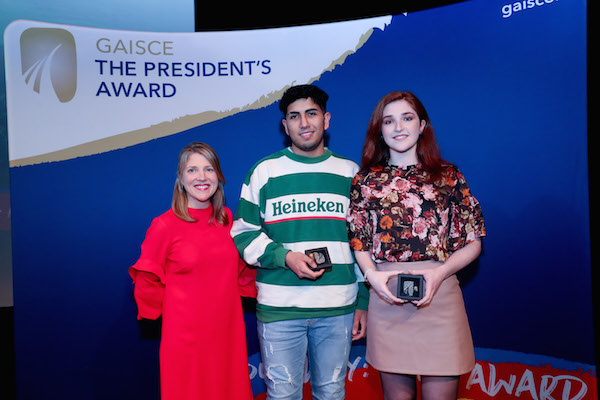 The President’s Silver Award Ceremony was held in the O’Reilly Theatre Dublin 1 on Thursday the 7th of November where 148 people from throughout Ireland were awarded.

Speakers on the night included UN Youth Delegate Jack O’Connor, who is also a Gaisce Bronze Awardee, and Olivia Porter, a Wexford native who received her Gold Award in December last year from President Michael D. Higgins. The event was MC’d by Spin 103.8 DJs Graham O’Toole and Nathan O’Reilly.

Silver Awardees recognised on the night have successfully completed at least 26 weeks across three different challenge areas and undertaken a 3-day adventure journey. The adventure journey incorporates either a 50km walk or or a 190km cycle.

Speaking about the achievements of the awardees, Yvonne McKenna said, “I heartily congratulate this evening’s Awardees on their achievements. It’s fantastic to be honouring so many young people tonight for their dedication to personal development, and I think it’s a testament to the tenacity of young people today that we have so many Awardees here tonight.

“I hope they have made lasting memories and gained invaluable self-knowledge through their Gaisce Journey. Completing a Silver Award has required a significant amount of dedication and effort from each one of them”.

She continued, “I would also like to congratulate their wonderful President Award Leaders, who have guided them along their path to silver. Our President’s Award Leaders truly are the lifeblood of the Gaisce programme, without whom there would be no Gaisce, but also their families and communities, whom I’m sure will be incredibly proud of them”.

Speaking about the ceremony, Gaisce Gold Awardee and speaker on the night, Olivia Porter said, “I’d like to congratulate all of the Silver Awardees on their amazing success. I received my Gaisce Gold Award last December and I can’t convey the level of achievement I felt during the ceremony. I know that many of the Awardees here tonight will relate to that experience. Doing Gaisce really pushed me out of my comfort zone and shaped me to be more self-aware and open to new things. I think undertaking Gold made me realise how much I enjoy improving myself and that has really motivated me in other areas of my life. I hope the Silver Awardees tonight take the next step on their Gaisce journey and feel the benefits I felt from undertaking Gold”.

Gaisce – The President’s Award is a personal development programme for young people which enhances confidence and wellbeing through participation in personal, physical and community challenges.

Since its inception in 1985 over 178,000 young Irish people have completed a Gaisce Award, including former Rose of Tralee Maria Walsh and Irish rugby international Robbie Henshaw.