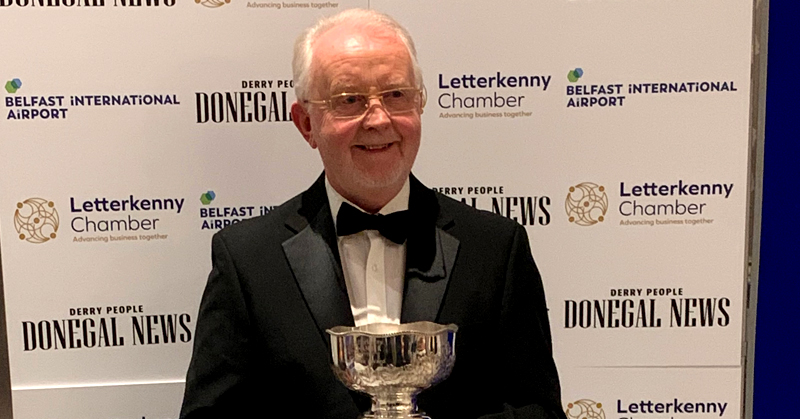 Mr John Loughrey as been awarded a prestigious place in the Letterkenny Chamber’s Hall of Fame.

The Hall of Fame recognition, sponsored by City of Derry Airport, is awarded to one individual each year at the Letterkenny Business Awards.

There were congratulations all round for John as he joined the select group of outstanding local business persons who have made immense contributions to help people in Letterkenny and beyond.

John F. Loughrey Financial Services, based at Crossview House, has been at the heart of the Letterkenny community for more than 30 years.

John established the business in 1984 and it has grown to become the northwest’s leading independent financial services provider.

In accepting his award, John thanked his family, his staff, all his clients over the years and his tenants at Crossview House. Looking back on the early years of the business, he talked about how he combined his flair for figures and love of helping people to set up an impartial advisory firm which gives clients the best advice.

Now John, alongside his daughter Lisa, leads the company of 14 employees and pride themselves on helping clients plan for their retirement, save for their future and protect their greatest assets.

Letterkenny Business Awards 2019 took place on Friday night in the Clanree Hotel. More than 400 people attended the event, which was presented by Keith Fletcher and President of the Chamber, Leonard Watson, addressed the large gathering.

See the full list of winners and the Business Person of the Year award here: