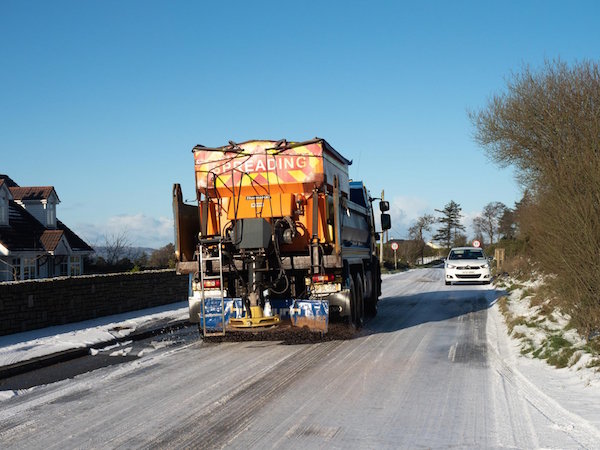 Donegal County Council has announced it is to grit all primary road routes across the county tonight as temperatures plunge once more.

It comes as temperatures across the country look set to dip with wintry weather and even snow forecast during next week.

Snow could hit parts of the country next week as our freezing cold winter begins.

Sub-zero temperatures will prevail in the nights ahead, before rain turns to sleet and snow as early as Monday.

Meanwhile, cold and wet condition are expected in the coming days.

A Met Eireann spokesman said “Tonight showers will continue for a time before dying out later. Under clear skies fog and frost is likely to form away from Atlantic coasts. Lowest temperatures of -1 to +3 degrees. Winds will ease overnight.

“Sunday will be dry and bright at first with some sunshine. Later in the day, cloud will thicken from the west followed by rain in the late afternoon or evening here.

“The rain will spread across the country during the evening. Highest temperatures of 8 to 11 degrees. Light southeast winds will increase moderate to fresh as the day goes on with strong winds along Atlantic coasts by evening.”

“Wednesday will start mostly dry but rain will move in from the west later in the day. With low afternoon temperatures, the rain could turn to sleet or snow on higher ground.”

ALL routes will be gritted across the county from 9pm until 9am tonight and tomorrow morning.

Roads to be gritted tonight as snow forecast later in the week was last modified: November 9th, 2019 by Stephen Maguire
FacebookTweetLinkedInPrint
Tags:
donegalgrittersnow