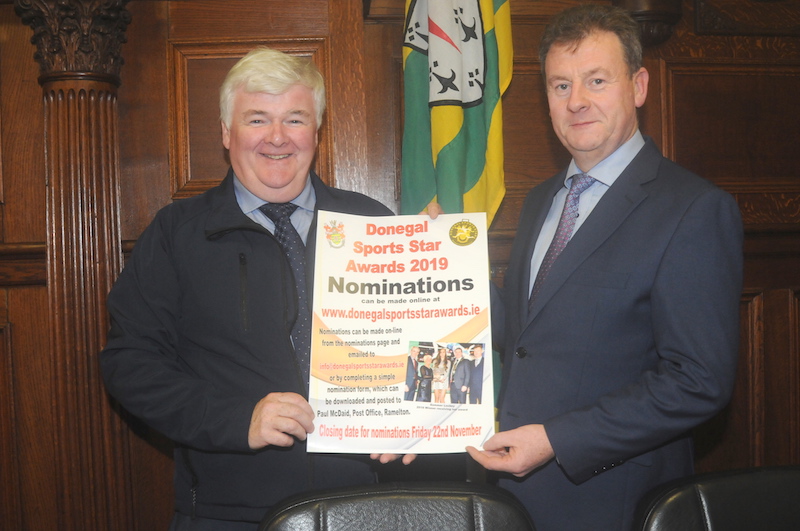 THE deadline for receipt of nominations for the 2019 Donegal Sports Star Awards is fast approaching, on Friday-week November 22.

It has been another fantastic year for sport in the County with an array of successes at local, provincial and national level as well abroad.

The Awards exclusive sponsors Donegal County Council is calling on all sporting organisations to ensure that the many achievements of teams and individuals this year are recognised by making the nominations before the November 22nd deadline.

Councillor Nicholas Crossan, Cathaoirleach of Donegal County Council and the Local Authority’s Chief Executive Seamus Neely have expressed their pride at the success of the awards which is now in its 44th year.

Cllr.  Crossan said: “It’s that time of year again when clubs, groups and communities from every corner of the county are asked to put forward their nominations for the Donegal Sports Star Awards.

“To be nominated for a Donegal Sports Star Award is an achievement in itself and to win an award has to be a very special moment in the life of a Donegal sportsperson.

“Donegal Sports Star Awards honours the sporting achievements of individuals and teams in a wide array of sports ranging from the well-known sports enjoyed throughout the county to the many minority sports that so many individuals in Donegal have excelled at over the years.

“I would encourage clubs, groups and communities from all different sports and in every corner of the county to put forward their nominations so that their sporting heroes can be honoured and recognised for their remarkable achievements.”

Seamus Neely said: “Donegal County Council is honoured to be the longstanding sponsor of the Donegal Sports Star Awards.

“These awards recognise and celebrate all that is great about sport in Donegal and the value that we as a community place on our own local sporting heroes.

“I believe that is only right that we take the time each year to recognise and celebrate the hard work and dedication of our sports stars and of their remarkable achievements.

“Sport has a special place in the life of our county.  It is the building blocks of our communities, it is the safe place where our children and young people can grow, develop and make friends and it is the essential lifeskill that instills and promotes an active and healthy lifestyle that will stand us in good stead as the years progress.

“Donegal County Council is proud to be closely associated with these awards and I would encourage clubs, groups and communities to put forward their nominations for their sporting heroes in 2019”.