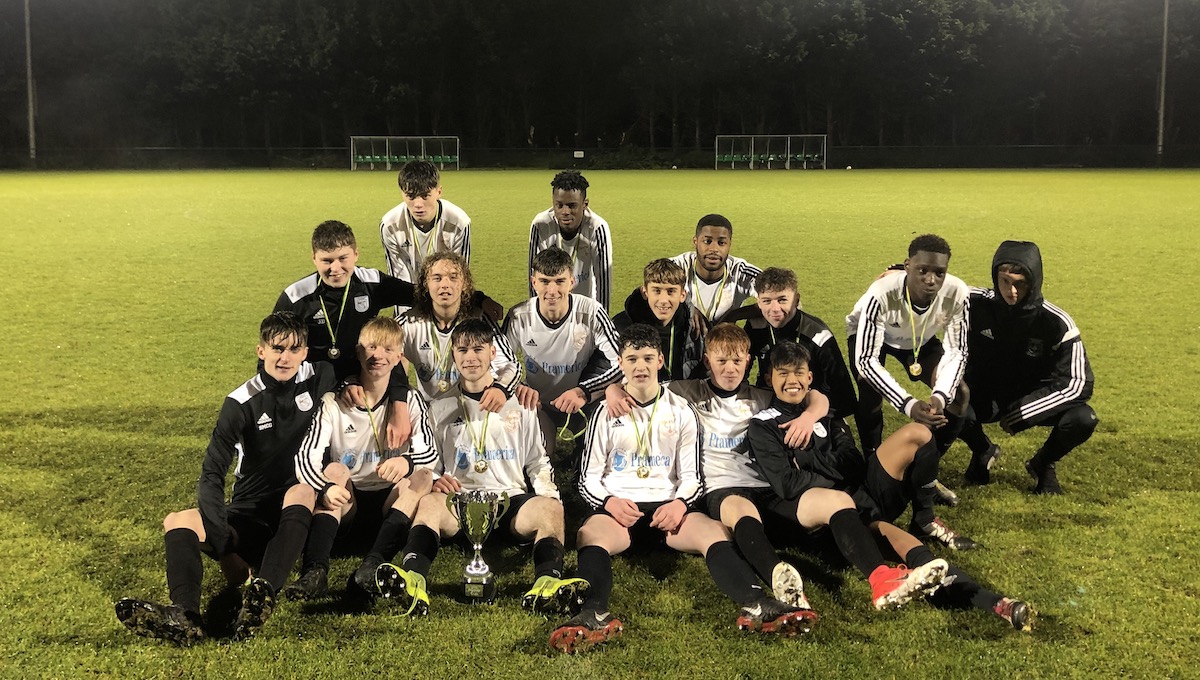 Letterkenny Rovers U16s singing in the rain after treble triumph

Letterkenny Rovers Under-16s sealed the treble tonight as a derby win over Bonagee gave them the Letterkenny and Northwest Premier Cup at a drenched Diamond Park.

It was only when Tobi Akinyimika tucked away the fourth goal in the final minute that the game was really copper-fastened.

Rovers, though, were deserving winners on a night when Jason Blake’s stunning double allowed Bonagee to hang in.

Akinyimika’s goal, in the final minute, extinguished any hopes that Bonagee had of forcing the tie to extra time.

Sean McGinley, Adam Yisau and Jack Dwyer also netted as the Leckview lads completed the clean sweep, adding the Premier Cup to the League title and the Donegal Schoolboys Champions League titles they had already won.

Rovers began well with McGinley turning home from a James B Gallagher cross in the ninth minute after Dwyer neatly spread the ball out to the right.

Rovers doubled the lead on 26 minutes as Yisau finished well when a cheeky back heel by Nathan Plumb caught the Bonagee rearguard out.

In between times, Plumb was denied by Ronan Coady, the Bonagee ‘keeper, while Leon Doherty had drawn a good save in the early moments. Centre-back Fouad Bashar did well to direct a header goal-ward, but Bonagee survived.

Bonagee did fashion one good opening in the initial exchanges, but Jonathan Pearson saved from Leon Boyce, after Blake put him through.

Ryan Creevy blasted wide as he reacted when a Blake free came back from the wall.

A 2-0 deficit felt like a mountain to climb for Bonagee, but they were back in business on the half-hour.

Spotting Pearson off his line, Blake let fly from long range and the ball dropped perfectly to the back of the net.

Dwyer clipped narrowly over with a delicious left-footed effort as Rovers sought to regain their control.

By then, the rain was teeming in sheets on the participants, making life testing in the extreme.

There was still plenty to keep the crowd on the edge of their seats and Coady saved superbly from Dwyer’s header, which was destined for the top corner.

Dwyer wouldn’t be denied 13 minutes into part two as he tucked home at the far post when Rovers caught Bonagee napping.

Ten minutes from the end, Blake struck gold from distance a second time and it was game on.

Rovers had kept Akinyimika and Sean Pascual in reserve and, although Bonagee remained in touch, it was the men in white who were in the driving seat.

Akinyimika rolled wide under pressure from Sergey Alcorn and Coady thwarted Rory Pyper, but Akinyimika sealed the issue when he turned neatly and picked his spot.