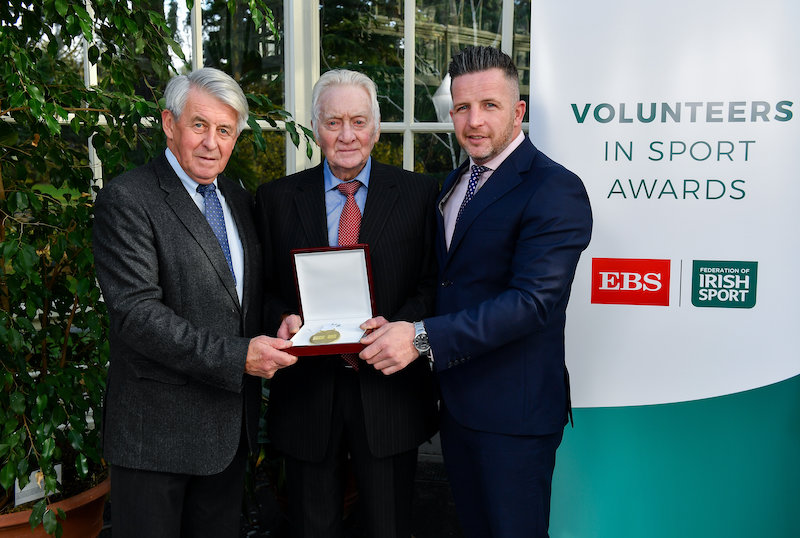 At a function at Farmleigh House in Phoenix Park, Dublin, the Castlefin man was presented with an award by the Federation of Irish Sport in association with EBS.

The awards recognise the 450,000 volunteers who deliver sport in Ireland each week.

This year, nominations were accepted on a 32 county basis with an overall winner from each county being honoured at today’s ceremony.

Peadar, who hails originally from Keelogs, Ballindrait, has been involved at Finn Valley AC since 1974.

An ever-present at the club since those early days, he remains an integral cog in the wheel.

On Friday-week past, the club hosted a celebration to mark Peadar’s 80th birthday.

The McGranaghan family have become synonymous with Finn Valley AC.

In the 1990s, his daughter Catriona was a member of the all-conquering Finn Valley women’s cross-country team. Another daughter, Sinead, has been winning medals at Masters level recently while Dermot is a well-regarded coach in schools locally with Athletics Ireland.

In the early years, Peadar had a training base at Porter’s Field, next to the family home at Hillhead, Castlefin, where he and his wife, Sadie, reared a family of six: Catriona, Sinead, Peadar, Dermot, Hugh and Kevin.

Next week, Peadar and Sadie will celebrate 54 years of marriage.

Peadar was instrumental behind the scenes fundraising in those early years when the Finn Valley club was driving its development.

He remains an active coach at Finn Valley AC, working mainly with the juvenile athletes. Recently, he took on a team including the late Shane Bonner, Ian Ward, Ryan McDaid, Pauric McLaughlin, Aidan Connolly and Darren McGlinchey and they won nine All-Ireland middle distance titles in a row.