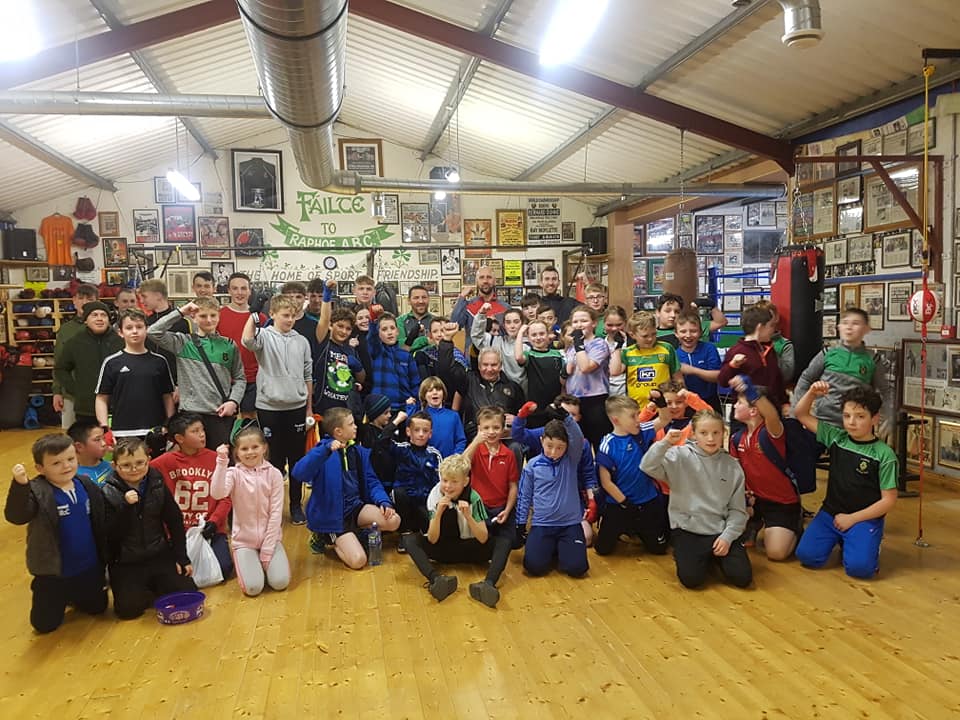 Channel 4 crew to film at Raphoe ABC tournament this weekend

RAPHOE Boxing Club will stage their 31st Annual Tournament in the Deele College Sports Hall in Raphoe this Saturday night.

Matchmakers Gary McCullagh (Raphoe BC) and Shaun Finn (Worchester City BC) have pencilled in 14 star-studded contests in weights ranging from 46kg to 91kg featuring Irish and English champions.

Over the years, the show has become one of the highlights in the Donegal boxing calendar.

The opening bout brings together Raphoe’s 46kg schoolboy puncher Ryley Doherty and Tenbury’s Shane Jones. Both young men have had a busy season and it’s anyone’s guess what the outcome will be.

Feeney will fancy his chances here as he’s recorded wins in his previous four outings this season, including an impressive victory over Hull’s Jobran Khan two weeks ago.

At 66kg, hammer-handed 9-County champ Liam McMonagle is paired with Adam McDaid in a contest which might not go the distance as both fighters carry lots of power in their punches.

Raphoe’s long-serving Danny Duggan meets Londoner Thomas Hunter (Finchley BC). Both seasoned punchers have a wealth of experience in a hard contest to call.

Also on the night, Cookstown’s dynamic duo of live-wire lightweight Teo Alin and the durable Charles McDonagh face stiff opposition in the shape of Anton Assion and James Scarlet.

The Tyrone pair never fail to impress and will be up for the task in hand. Raphoe’s much-travelled Orin McDermott is paired with Patrick Stokes at welter and his team-mate Paul Darby crosses swords with Jesse Brandon at middleweight.

In what has the makings of a mouth-watering heavyweight punch up, Michael McConigley (Illies GG) is in against the power-punching Tenbury steeplejack Jack Bannister in what could be an inside the distance war.

The three English clubs travelling to Raphoe to represent the Brennan Boxing Academy are Worchester City ABC from the Midlands, Baker Street ABC, Western Counties and Finchley ABA from London.

A Channel 4 television crew will accompany the team from the start of their journey at Birmingham Airport on November 15 until they return to England on November 18. Channel 4 will broadcast a documentary of the trip in early January including footage of the boxing tournament.

Raphoe BC head coach Gary McCullagh said his boxers are excited about being filmed for the documentary.

Peter O’Donnell of the Raphoe BC said: “I know Paddy Brennan well and he is doing a first-class job in helping young people turn their lives around.

“This latest visit is a part of an exchange which has been going on for the past five or six years and it is always nice to see fighters coming over from England. It will also be an opportunity for us to showcase what we have and to highlight the Raphoe Boxing Club.”