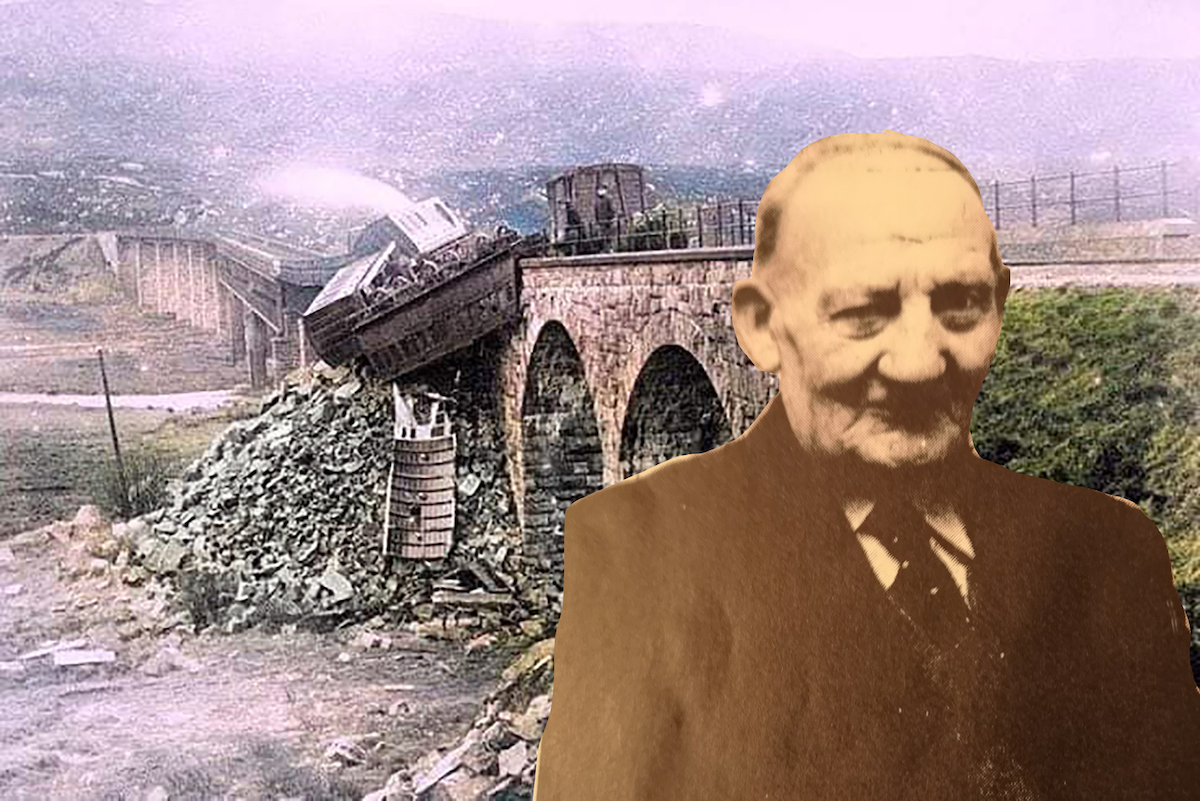 The year 2020 is nearly upon us and yet if you ask anyone to name the biggest land transport disaster story in Donegal over the last 100 years, most will still recall the Owencarrow viaduct disaster as the saddest story which now is even far beyond living memory.

A few years ago following a journey in which I traced, the old route that Lough Swilly Railway made from Derry to Burtonport, I discovered just how many people that still have their own story to tell about the railway.

One of Letterkenny and Donegal’s most capped Gaelic footballers, John Hannigan made his mark at corner forward with the many club and county teams that he lined out with.

In a conversation with John in Mac’s Mace over a cup of coffee, he mentioned that his father worked on the railway.

As the conversation continued I was to discover that John Hannigan’s father was the fireman on the footplate of the train on the night of the Owencarrow viaduct disaster. 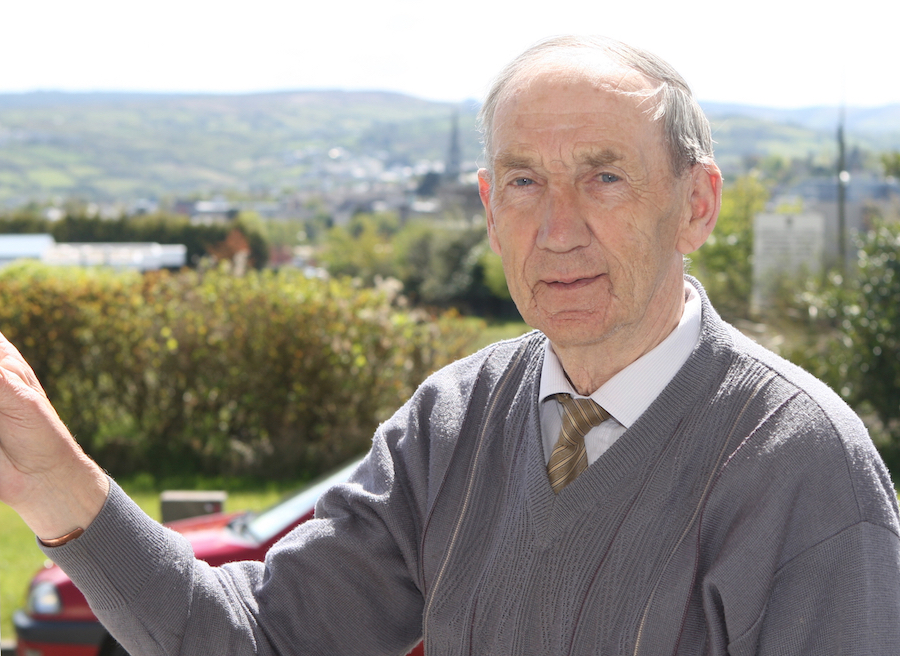 The late John Hannigan, son of the fireman on the train that was blown off the track at the Owencarrow Viaduct Photo Brian McDaid.

His plan that day was to locate an old B.B.C. recording of his father which his family had somewhere and to sit down someday and the both of us would listen to it and John would explain it to me so we could put the recording down on paper.

Sadly them plans were never to come to pass because John died suddenly in 2014.

Many a day since passing the viaduct over these last years I have often thought of that missed opportunity to document a first-hand account of what happened on that cold winters night on the top of that remote viaduct on the 29th January in 1925.

Working on a completely different project this week for the forthcoming Christmas annual, I staggered across a story that I never thought I would see.

It was a first-hand account of that fireman on that train that night. John Hannigan was interviewed before Christmas in 1984 to coincide with the 60th anniversary of the rail disaster that following January in 1985.

34 years on, and with kind permission of the editor back in 1984 and still in the seat, Jim Lynch has let us share their first-hand account by fireman John Hannigan of that tragic train journey from Derry to Burtonport which ended in the storm on the top of the Owencarrow viaduct.

The famous footplate man – Interview in 1984

A life on the railway was his first choice and he never regretted it.

After over 60 years with the ‘Swilly’ he is now in his retirement and fond of recalling the exciting, pleasant and sometimes saddening events of a very full life which took him as a driver and a fireman over the whole railway system.

Most poignant memory is of that fatal accident at the Owencarrow viaduct 60 years ago this January.

The high winds, A sudden jolt on the permanent way, the derailment of a carriage through the roof of which went below to die. 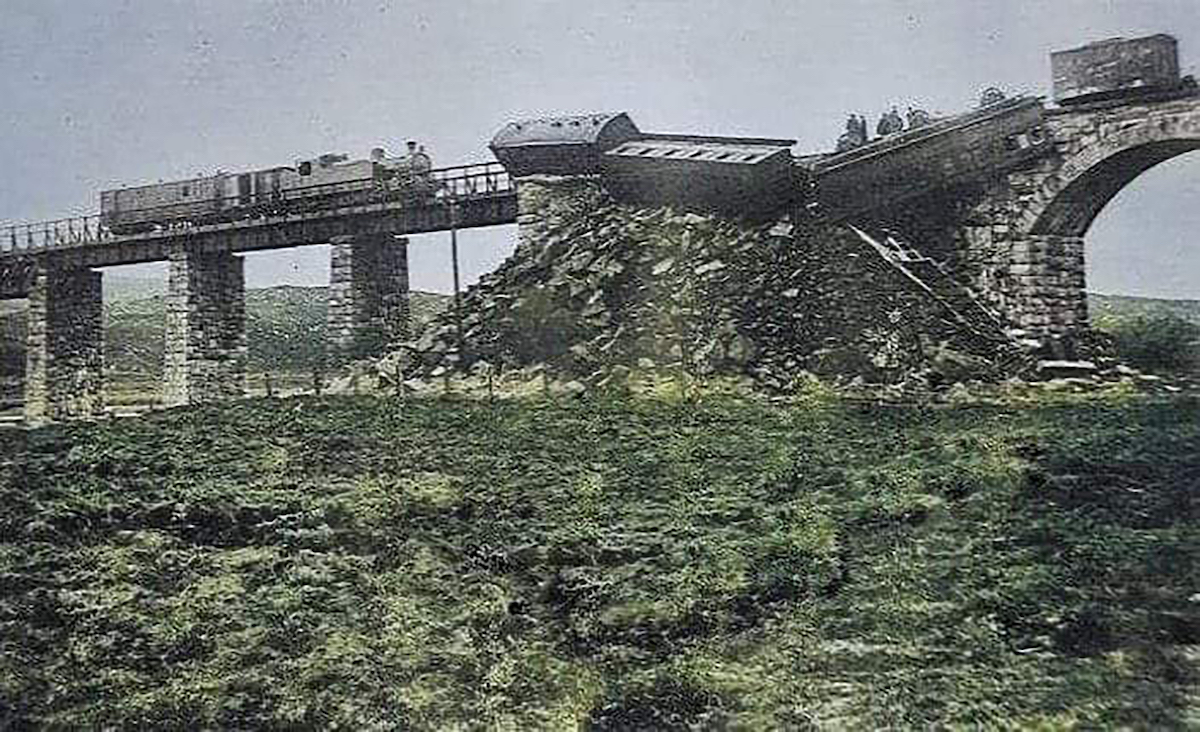 A crew that were sent out form Pennyburn Station in Derry to help with the recovery of the Lough Swilly Carriages carriages at the Owen Carrow Disaster.

John Hannigan Senior of the High Road, Letterkenny was born near Fahan, where his father James manned a busy railway junction. John was fascinated by the work of his father and as a schoolboy, he made up his mind that he wanted to work on the railway.

On the 7th of August 1914, his name went on to the staff list. He worked with his father for a while learning how to marshal the rail traffic for 12 shillings a week. John, an ambitious pupil made no mistakes.

Then came a chance to work on night-shift in Derry for 14 shillings which were big money then for a young lad.

The mighty engines which hauled wagons and carriages amazed him and he became an engine mechanic in Buncrana.

Then in 1916 John was promoted to the position of permanent fireman and travelled on trains all over Innishowen to Letterkenny and as far as Burtonport. 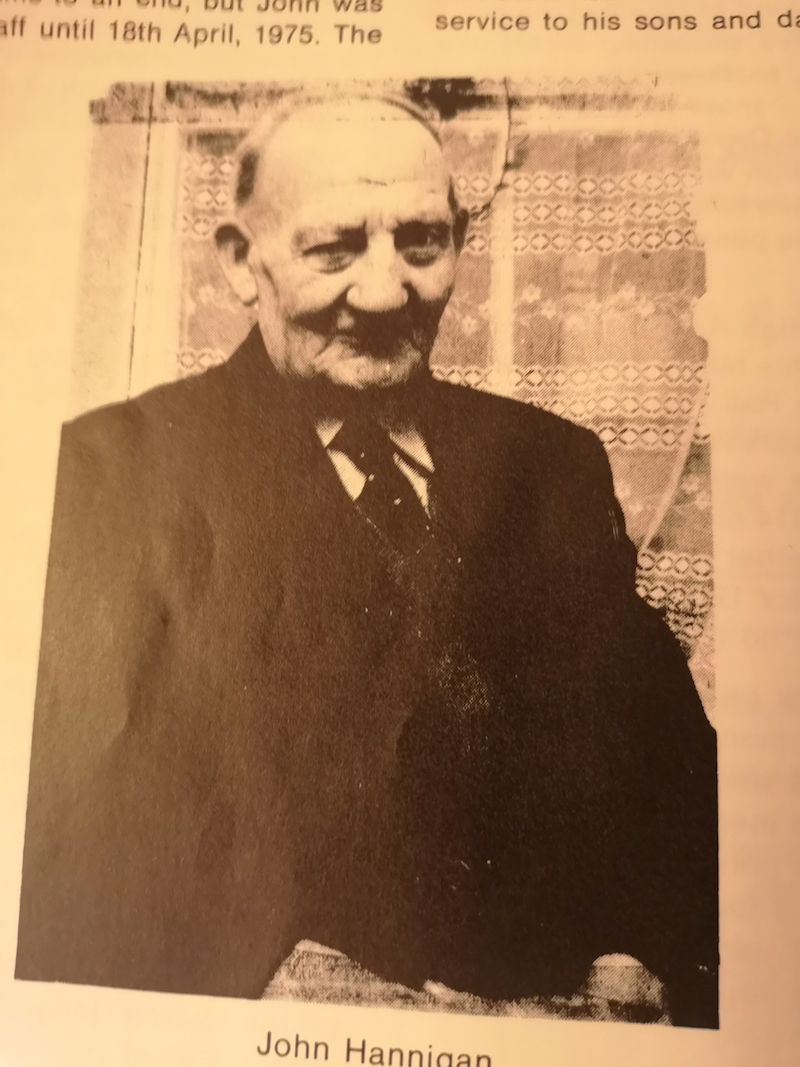 Fireman on the engine of the Owencarrow Viaduct disaster John Hannigan who was interviewed in 1984 about the night that train was blown off the tracks.

Then after years of efficient service in the footplate, he realised his youthful ambition and was promoted to the position of driver in 1926.

“The duty hours were irregular, sometimes from 6am to 8.30pm and work on Sundays too. Many a winter night I pulled out of Pennyburn Station in Derry around five o’clock to head for Burtonport, but we thought nothing of that in the days”.

John is the only man around now who can tell of the viaduct disaster at the Owencarrow, near Cresslough with the loss of several lives on Friday night, the 28th of January, 1925.

“We left Derry that evening around 5.15pm, we had two wagons of bread next to the engine.

“They were sent out from Derry by Stevensons and Brewsters Bakeries after that was three carriages, a first, a second and a third class, behind that were six wagons of general merchandise and the guards’ van at the end.

“Neilly Boyle was in charge as guardsmen who was from Burtonport, who later was a conductor on the buses.”

At Letterkenny, we took off six wagons and replaced them with other wagons which were carting perusable goods. I remember it was the No 14 engine, it weighed 31 tons an 11 cwt.

At Kilmacrennan Station the wind was starting to blow hard we then knew it was really stormy. Bob Mc Guinness was the train driver and we consulted about the state of the weather- if it would be safe to go ahead.

“I had often gone over the viaduct in a smaller engine. We decided to proceed. Bob slowed down to a snails pace and as we crossed the bridge we did not think that the storm was all that bad.

“We were nearly at the end of the viaduct when it all happened and quite suddenly. The carriage behind the two bread wagons was raised up on the line, it was like a hump on its back.

“It then fell against the parapet and the roof was smashed, two passengers were thrown out, Phil Boyle was killed, his wife was injured and died afterwards.

“A Mrs Mulligan also lost her life, they had fallen through the roof and into the river below.

“Another man Andy Doogan was found dead near the viaduct, he must have also been on the train.”

“The wind increasing in strength with the passing minutes the engine crew were faced with a frightening dilemma.

“We managed to stumble across the bridge to the end of the train to free Neilly Boyle jammed against the bridge railing, then I went the two miles to Cresslough Station for help. And between running, walking and falling I finally made it.

“On the way, I called at the homes of the two-level crossing men and brought them with me. We told John Gallagher the Station Master what had happened.

“Next we alerted the local guards and doctors. I got a lift back to the scene. It was about quarter to eight. A young priest, Fr. Gallagher was attending to the dead and injured.

“The news had spread and a large crowd began to gather.

“It was a very sad and confusing scene with everyone working the best the could with those who were injured or in shock, indeed we were very shocked ourselves”.

Pennyburn Station sent out the manager Mr. Hunt, Mr Napier and a party of workmen to clear the line. They took the engine on to Cresslough and stayed by the fireside to morning. 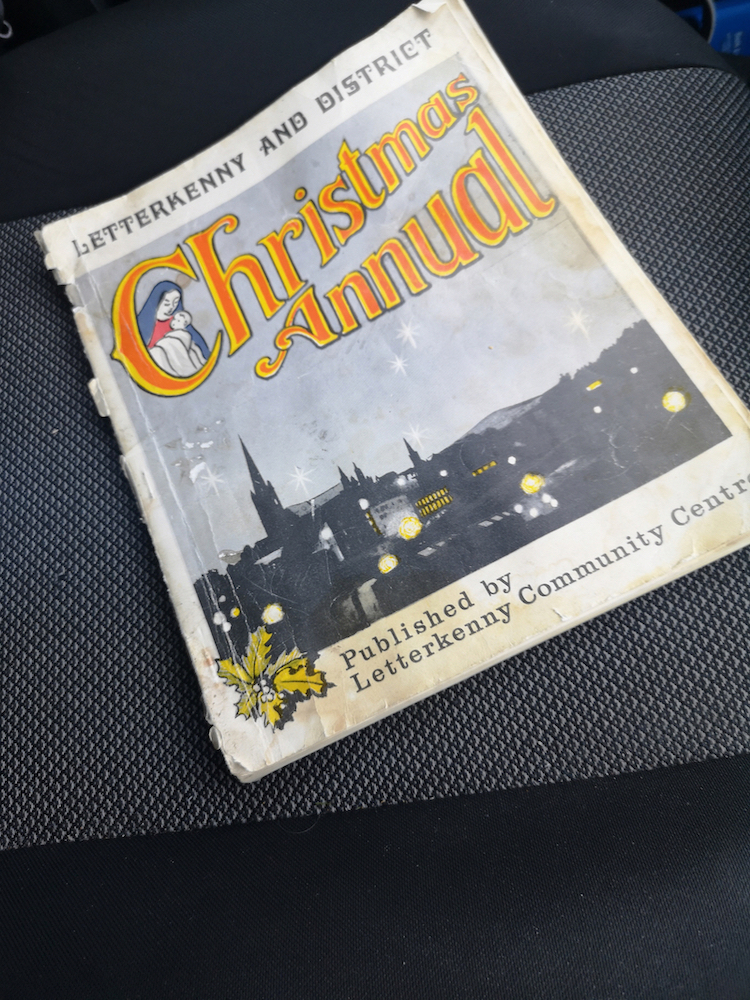 Bob Mc Guinness and Neilly Boyle have long passed away; it has been left to John to recall what was the most unforgettable happening in his long association with the Swilly Railway, John drove goods train daily between Letterkenny and Derry after that.

The railway sadly came to an end but John was kept on with the garage staff until the 18th of April in 1975.

The demise of the railway was a bitter blow for John and his late brother Leo also a fireman.

Between the people and their families who worked on the railway, there was a close and co-operative camaraderie.

Serving their employers and the public was the paramour concern trouble was too great to ensure that bring done.

Most rail employees belonged to families who had served the company earlier.

61 years with the Swilly

John Hannigan was 85 when he gave that interview a few years before he passed away in 1987.

He born in 1899 he joined the staff of Lough Swilly just 15 years old, he was just 26 the night the train left the rails in the storm, who both helped his fellow workmates to safety and also made the two-mile journey on foot in complete darkness to raise the alarm and look for help.

He was to witness the end of the Burtonport extension the Carndonagh extension lines in the 40’s and complete end of the Lough Swilly Railway in 1953.

He worked on after the railway closed in the garage at the Swilly Bus station in Letterkenny to 1975 notching up 61 years of service with the transport system history in a Donegal, his children shared in the nursing of Pop Hannigan as they affectional knew him in his final years. “cuttie” was a greeting pop used a lot.

If the late Miah Deeney, also son of a train driver, Jimmy Deeny hadn’t held on to this old Christmas annual we never would have found the uncredited interview of John Hannigan (possibly written by Niall McGinley, a son of Dr. Mc Ginley who both attended the scene on the night of the disaster and also was the County Corner who conducted in inquest later).

We wouldn’t have be able to piece together this story and rekindled the memory of that famous fireman on the footplate, John Hannigan from 1925 and with the help of his family of that famous corner forward, his son the late John Hannigan, his wife Claire, grandson Damien, (home on holidays from San Francisco) and grandson Shaun called after his grandfather John, son of the late Seamus Hannigan Iona Rd. who have all helped to describe that Fireman John Hannigan to put this story of that tragic night at the Owencarrow Viaduct together.