The late Seamus Corry: ‘A gentle giant with a heart of gold’

The late Mr Corry, of Illistrin, Letterkenny, was deeply involved in his beloved Illistrin FC.

A founder member of the schoolgirls tams at Illistrin, he had played for the club in his own youth.

Seamus passed away on Wednesday at Donegal Hospice following an illness.

“Seamus has been dedicated to this club throughout his entire life,” Illistrin FC said.

“He started as a schoolboy and played in the local league for many years.

“He would go on to be a valuable committee member and was one of the founding members of girls football teams at Illistrin.

“Indeed his daughter Orla was captain of the U16’s this past year and like all his daughters she made him very proud.

“He also took great pride in the pitch and facilities at Illistrin FC. He worked hard on maintaining the grounds superb playing condition and kept a close eye from his beautiful home on the hill.

“No doubt he will still be watching from far above in the heavens.

“We will all miss you dearly Seamus. A gentle giant, with a heart of gold. We will always be grateful for the time, love, dedication, and passion you gave to our club.”

Tributes have poured in with neighbouring clubs Bonagee United and Lagan Harps offering condolences to a ‘much-loved and respected coach’, while Brid McGinty of the Donegal Women’s said said: “His strength was just amazing.” 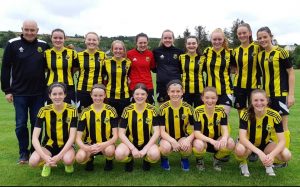 The late Seamus Corry with an Illistrin FC team

Fianna Fail County Councillor Ciaran Brogan said the deceased had a ‘huge input to the development and enhancement of the club.’

Cllr Borgan said: “He was so proud of all the great facilities in the club today and spent so much time down around making sure everything was in order for all the players for training and the games..A great fella gone far too soon.”

Seamus Corry is survived by his wife Fidelma, daughters Emma, Orla and Niamh, mother Rita, sister Patricia and a wide circle of family and friends.