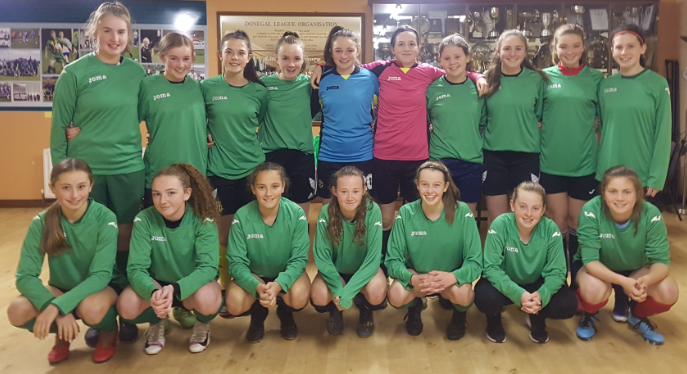 THE Ulster Schools squad is set for this weekend’s FAI Schools Under 15 Girls’ Interprovincial Tournament at the AUL Complex.

The Interprovincial series will be the first step in the process of selecting the FAI Schools International Development squad of 18 players who will compete in the Bob Docherty Cup.

The 2019/20 campaign will see the Republic of Ireland Schools select travel to Manchester for this season’s Home Nations event. The International series will take place during the Easter Break from Monday, April 13 to Friday, April 17.

Prior to that the squad will take on England in the annual John Read Cup as well as a friendly with Northern Ireland in the build-up to this season’s International run.

Bridgeen Harley is again in charge of the Ulster selection.

The absence of Keri Loughrey will be a massive blow for the girls as the young Scoil Mhuire, Buncrana scholar impressed last season and was still eligible this year but a broken leg in the Foyle Cup has ruled her out of contention.

Leinster have a phenomenal record at this level, the victory last season saw them secure their twelfth title in twenty years.

Ulster last won the tournament outright in 2010 and have always been very modest in their endeavours to recapture their hold on the trophy.

St. Columba’s College tutor Harley will be confident that they can give a good account of themselves.

The opening clash of this series will see our title holders Leinster take on 2017 winners Connacht at 3pm while Munster entertain Ulster at 4.30pm. Two very interesting games in store which should set the scene for the remaining encounters.

In keeping with the long standing tradition of maintaining the interest in the competition until the final matches on Sunday morning, the draw for Saturday and Sunday’s matches will be made following the games on Friday evening.