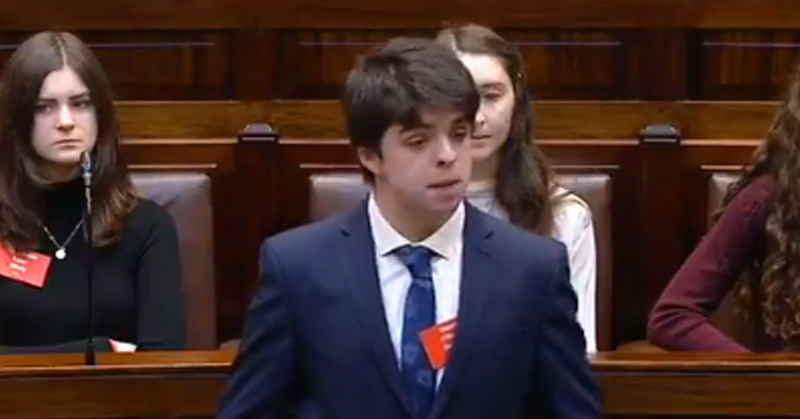 Donegal teenager Conal O’Boyle says it is ‘a shame’ that children had to take seats in Dáil Éireann today to discuss climate change.

The 17-year-old student from Muff was one of 157 young people who took part in Ireland’s first Youth Assembly on climate change.

Conal said that he hoped today’s assembly would serve as a massive embarrassment to the government, “as they have embarrassed this country on an international level when it comes to climate action.”

Speaking on behalf of the power and energy assembly group, Conal was also critical of the government’s dependence on fossil fuels.

Conal, who organised several climate strikes in Donegal this year, told the Dáil that children are united: “United behind the science that proves that we are currently in the fast lane, propelling ourselves towards catastrophic climate breakdown.”

He closed his speech with lines from ‘If the Kids are United’ by Sham 69. – “They can lie to my face, but not to my heart. If we all stand together it’ll just be the start. If the kids are united then we’ll never be divided.”

The Dáil Youth Assembly, organised as part of RTÉ’s climate week, explored the themes of environment, economics, food and farming, power and education. The historic event brought young people aged from 10 to 17 years together to establish what they would like to see as the next urgent steps for Ireland. The event was chaired by Ceann Comhairle Seán Ó Fearghaíl.