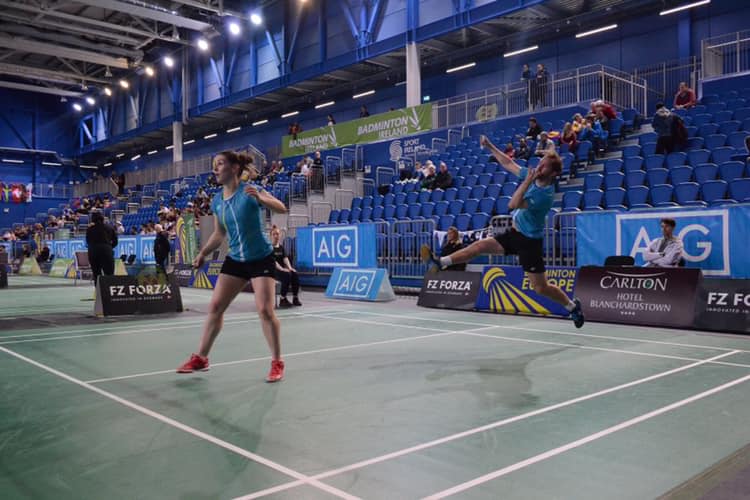 A PLACE in the final of the Irish Open eluded Raphoe siblings Chloe and Sam Magee.

The Magees, the defending Irish Open champions, went down in their mixed doubles semi-final against Ronan Labar and Anne Tran of France at the  National Indoor Arena in Blanchardstown.

Earlier in the day, the Magees overcame Denmark’s Mathias Thyrri and Mai Surrow in a scintillating contest. After losing the first game 21-19, the Magees hit back. A 21-9 success forced the tie to a third and decisive game, which they won 21-13.

That put them into a semi-final meeting with the highly-touted French pair.

Twelve years ago, playing alongside Huang Big, Chloe Magee had won the women’s doubles at this event, but Irish winners overall have been a rarity in recent times.

And the Donegal duo – European Games bronze medalists in Minsk earlier this year – lost out after a gallant fight.

Yesterday, the Magees defeated Patrick Scheiel and Franziska Volkmann from Germany 21-11 21-9 and a pairing from France, William Villeger and Sharone Bauer, 21-19 21-13, to move into the quarter-finals.

Thyrri and Surrow were dispatched, but the semi-final proved a bridge too far with a new name now set to go on the mixed doubles title.

Rachael Darragh had to come through the qualification rounds in the women’s singles.

Darragh teamed up with Sara Boyle for the women’s doubles, but they succumbed to England’s Jenny Moore and Victoria Williams, who won 21-5 21-5.

Darragh was alongside Paul Reynolds for the mixed doubles, but they lost out after three games 21-17 19-21 21-11 to Lin Kuan-Ting and Lin Hsiang Ti of Chinese Taipei.

In the men’s singles, Joshua Magee overcame Nadeem Dalvi from England 21-8 21-4 before losing out in a pulsating contest 22-20 23-21 to Lin Kuan Ting from Chinese Taipei.

Joshua Magee and Paul Reynolds were beaten 21-13 21-17 by Scotland’s Alexander Dunn and Adam Hall in the men’s doubles.