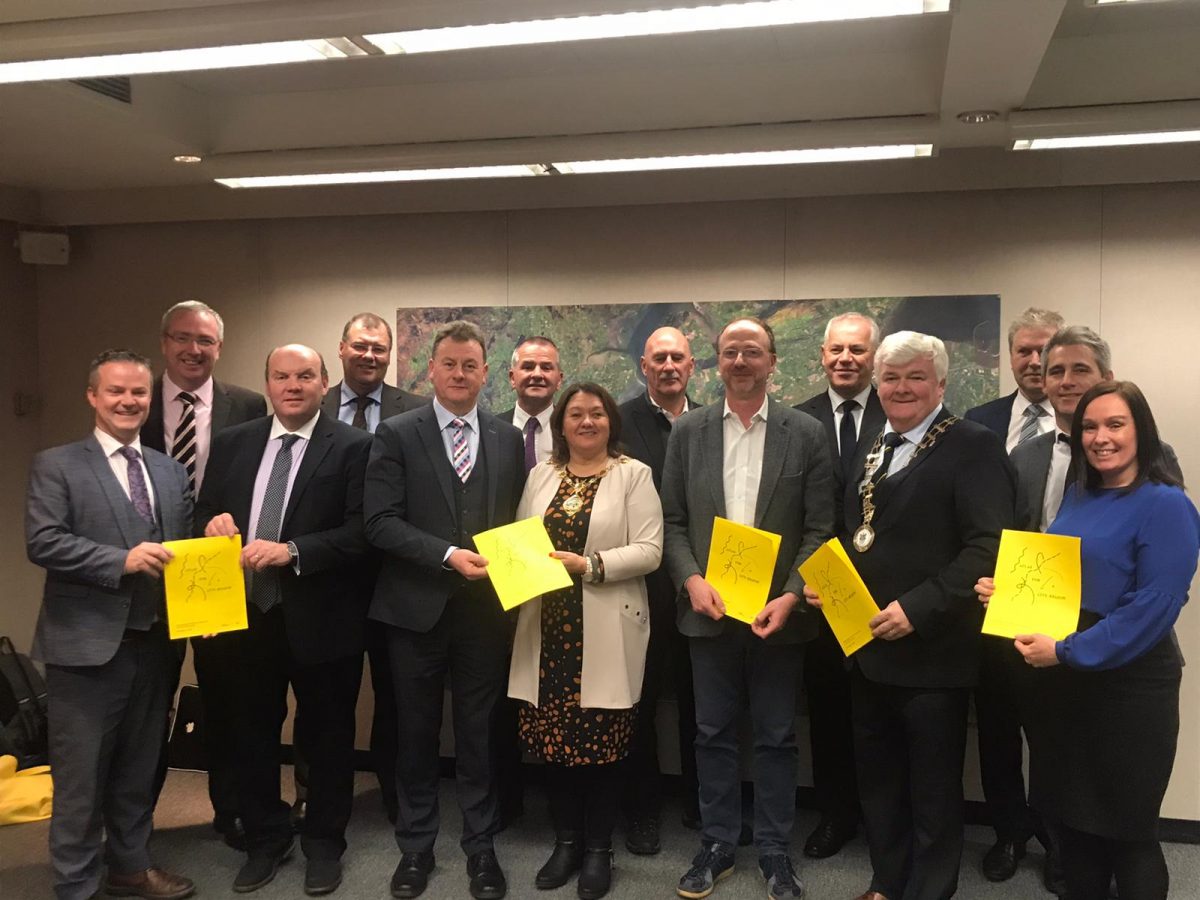 After 18 months of research including fieldwork in the Northwest of Ireland, Harvard University Graduate School of Design (GSD) formally launched their findings of the ‘Atlas for a City Region’ project at a special event in Harvard University, Massachusetts yesterday (Thursday).

The project ‘Atlas for a City Region’ was jointly commissioned by both Donegal County Council and Derry City and Strabane District Council and has been borne out of the unique cross-border collaborative approach adopted by both Councils who are firmly of the view that despite Brexit and indeed the border, their region including Letterkenny, Derry and Strabane has the potential to continue to grow and prosper.

The final report is structured around three questions. Is there a cross-border region in the Irish Northwest? How to draw that region on a map? And how might the region develop over the next two hundred years?

In answering these questions, twenty-seven students from Harvard University travelled to the Northwest for fieldwork in spring 2019. One group of students gathered evidence of a cross-border region.

Working with Niall Kirkwood, Professor of Landscape Architecture and Technology and Associate Dean for Academic Affairs at Harvard GSD, another twelve students imagined the future of the region in light of Brexit and changing climates.

“If we don’t imagine the future, we have no hand in shaping it,” said Professor Gareth Doherty who was the lead investigator for this project and a native of Carndonagh in Co. Donegal.

Speaking at the launch, Cllr. Nicholas Crossan, Mayor of Donegal County Council commended the work done by Harvard GSD students under the guidance of Professor Gareth Doherty, Director of the Landscape Architecture program at Harvard GSD.

“This has been an exciting project for us to embark upon and I must commend the quality of the work, the imaginative and innovative proposals that have been presented to us and the value of the ideas and propositions that the students, under the guidance of Professor Doherty, have conceived.

“This project has been about getting a fresh outside perspective on what the opportunities are for our region. We have ambitious plans for our region and despite the challenges we face, we believe that we have the confidence and resilience to allow our communities and businesses to continue to thrive and prosper.”

Mayor of Derry City and Strabane District Council, Cllr. Michaela Boyle believes that the concepts and ideas presented by this project will play a vital role in informing the direction of travel for the region and that the hands-on approach taken by Harvard GSD’s students during their visit to the region earlier this year has allowed them to develop a deeper insight into the lives that are lived in the region, the challenges that are faced and most importantly the opportunities that exist.

“This is very much reflected in many of the proposals presented and I think these experiences have added a greater depth and understanding to the student’s ideas and concepts.

“This project has been about imagining our future, it has been about looking at the potential impact of major events such as Brexit, climate change, rising sea levels and higher temperatures and what we can do to mitigate the adverse impact of these events.

“This has resulted in a suite of imaginative, innovative and unique proposals that can only enrich plans for the future development of the city region.”

The findings from this research will be exhibited in the North West region in Spring 2020.