The young man who died in a drowning tragedy on Arranmore Island this morning has been described as a hugely popular young man who was a huge part of island life.

The victim has been named locally as Lee Early, a 26-year-old single man from Arranmore Island.

The tightly-knit island community, which has a population of around 450 people, are grieving today following the freak accident which claimed Lee’s life.

Another man in his 30s was lucky to escape after the men’s car went into the sea at Poolawaddy Pier just after 5am this morning (Sun).

It has since been revealed that Mr Early, who worked on the Arranmore Ferry, was also a volunteer on the island’s RNLI lifeboat.

Indeed his father Jimmy is the coxswain on the local lifeboat.

Members of the lifeboat crew, whose station is close to the scene of the tragedy, rushed to save Mr Early and his friend after their car entered the water.

The passenger managed to swim free but Lee died at the scene despite the heroic efforts of the lifeboat crew members to resuscitate him. 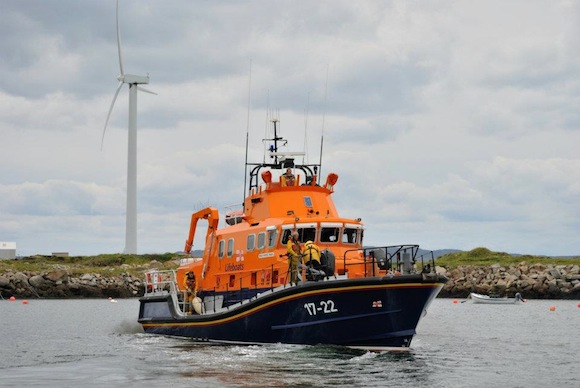 RNLI area life-saving manager for Ireland, Owen Medland, said Lee’s death would be a huge loss to the island.

“The deceased was one of our volunteers and was very close to us. He was a super young man who would be a loss to any community never mind a small community,” he said.

“As an organisation, our thoughts are with the family, our volunteer crew who fought valiantly to save the young man’s life, and the wider Arranmore community.

“We would like to assure the community that after what appears was a tragic accident, we are maintaining our lifeboat service on the island which is further testimony to the crew in Arranmore.”

Local Donegal TD Pat the Cope Gallagher said he was shocked by the new of Lee’s death.

He said he knew the family whom he described as “true islanders” and there was a great sense of loss as a result of Lee’s death.

“A sense of deep shock descended on the island when news broke of the tragic death of Lee.

“He was a highly-regarded, hard-working and popular young man from a well-respected island family.

“Our thoughts and prayers are with them at this difficult time,” he said.

A full Garda investigation into the tragedy has commenced.

The investigation will probe how the men’s car ended up in the sea off the pier which is at the rear of the island.

A post mortem on the late Mr Early will be carried out tomorrow (Mon) at Letterkenny University Hospital to determine an official cause of death.

His family, including father Jimmy, mother Noreen, brother Adam and sisters Rachel and Laura are being comforted by family and friends on the island.

The island has been at the centre of a huge campaign aimed at persuading people from around the world to live there.

Locals even wrote letters to families around the globe in America and Australia telling them of the benefits of coming to live on the island.

The island, which rests 5 kms off the coast of Donegal has its own health centre, community centre, three schools and even a digital hub.

The hub was set up in conjunction with telecoms giant Three and offers super-speed broadband for people wishing to set up businesses on the island or who want to base themselves there.