Over 200 people were treated to a magical night of Christmas music on Friday when Letterkenny teacher Anne Nicholls and guests launched a charity CD.

Music, stories and special moments were shared at the launch of Christmas Greetings from Letterkenny at Arena7 in Letterkenny.

The CD features local musicians and pupils of Scoil Mhuire gan Smál, who worked together to create a unique Christmas gift in aid of St Colmcille’s Homeless Hostel. 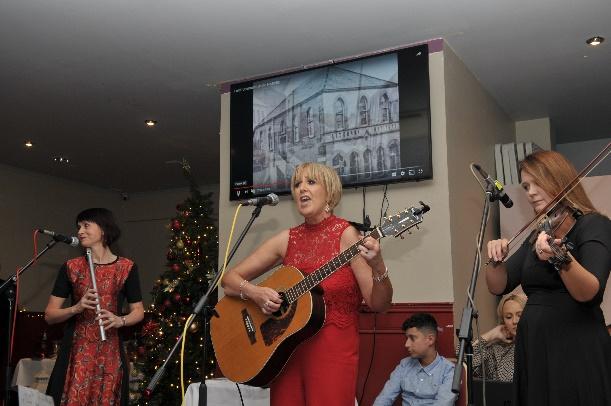 Bishop Alan Mc Guckian S.J. officially launched the CD and spoke of how delighted he was to see such a large turn out for the event. He commented on how great it was to see people come together and use their talents to help others. He said he has enjoyed listening to the CD in his car and has learned a lot about the history of Letterkenny from the song Leitir Ceanainn. He urged people to buy the CD, (or to buy two!) for the benefit of the Homeless Hostel. 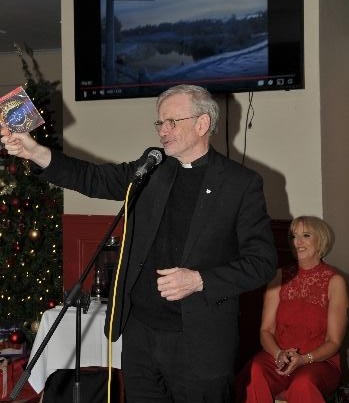 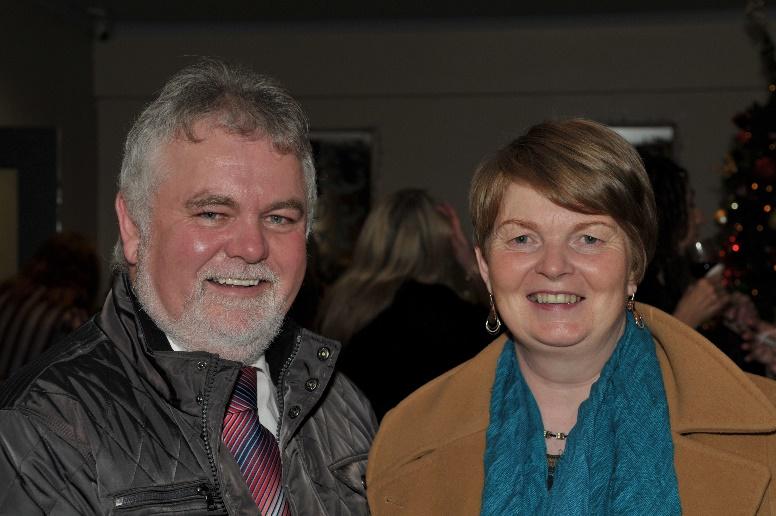 Ciarán & Mary Maquire who run St Colmcille’s Homeless Hostel at the launch of the CD in Arena 7.

Mary Maguire, on behalf of the Colmcille’s Homeless Hostel, spoke of the growing number of people who need the services of the hostel. She told of how this week they were able to set someone up in their own home and help them buy everyday items that we all take for granted like a duvet. The charity are delighted to be receiving the funds raised by this CD.

The musical performances of the night began with Anne Nicholls’ rendition of her own composition “Leitir Ceanainn” accompanied by Sinéad Gibson on low whistle and Aisling Cheevers on violin. In the background the video which illustrates the history of the town compiled by Kieran Kelly played.

Then Mrs Millar’s fifth classes from Scoil Mhuire took to the stage to perform “Said the Night Wind”. Soloist Kyra Mc Bride sang the first verse and timed the echo to perfection as Aoife Mc Geehan, Cora Gordan, Cassie  Campbell and Ida Kingue sang verse two. The rest of the class joined in and gave a fantastic performance. The girls were accompanied by Miss Anna Farren on keyboard, Ms Sinéad Gibson on low whistle and Mrs Aisling Cheevers on violin. 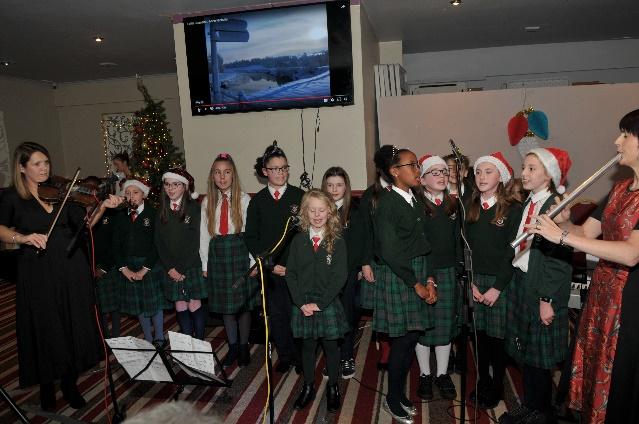 Miss Anna Farren’s fifth class then performed the Christmas classic “Oiche Chiúin” in four different languages. Anne began with verse 1 in Gaelic and then harmonised beautifully with Thea Leadley as she sang verse two in French.  Katie Bork, Antonina Cukras, Antonina Blasyzk, Julia Zebrowska and Natalia Wojcik sang verse three in Polish and the whole class joined for the last verse in English. The cuteness factor went into overload as Rionn Sibbald from Senior Infants sang the last line. The students were conducted by Ms Toni Harvey and accompanied by Miss Anna Farren. 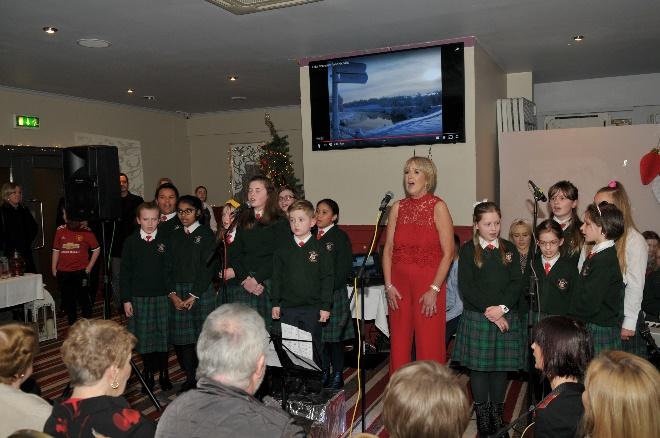 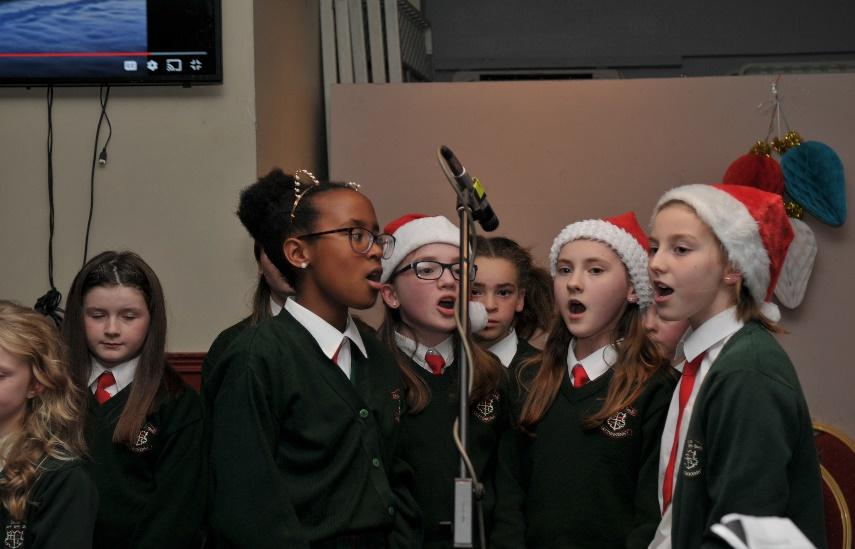 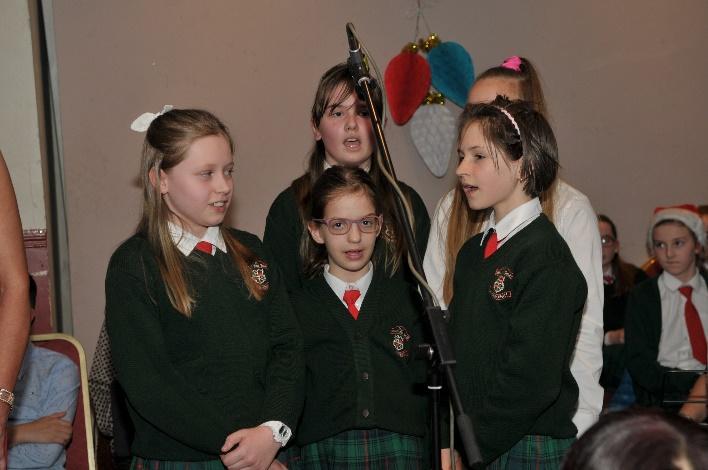 Next up was a little girl with a big future in the world of Music & Drama. Sadbh Breathnach performed “Child in a Manger Born”. Her brother Cormac then lit up the room with his performance of ‘Don Oíche Úd I mBeithil’ on the Uilleann Pipes as he and his mum Sinéad accompanied Anne on this beautiful traditional carol. Anne was then joined on stage by her son Pádraig Dunne as they performed Pie Jesu. A few tears were shed in the audience as mother and son dueted on this beautiful song from the musical Requiem. 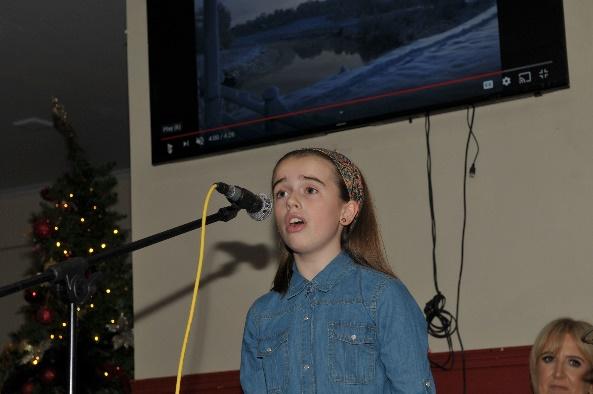 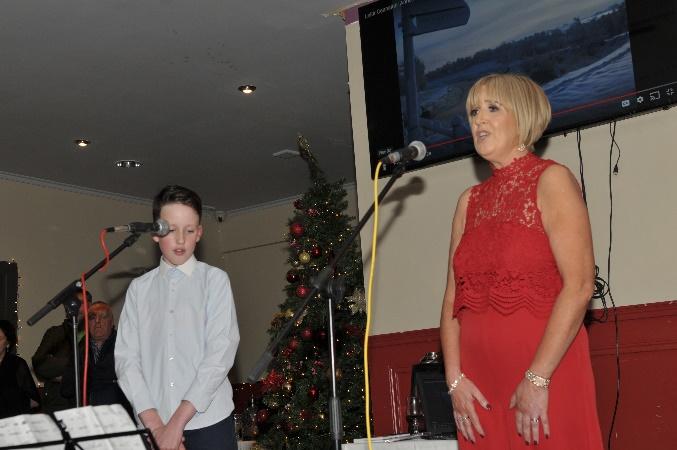 Anne was then accompanied on stage by Anna Farren on keyboard and Paul Gillespie on cello as she performed “In The Bleak Midwinter” and “The Christmas Song”. Emotions ran high in the room as Anne showed a video of herself and her late father Pat Nicholls performing “O Holy Night” in a Letterkenny Music & Drama Group’s  Christmas concert from 1998. 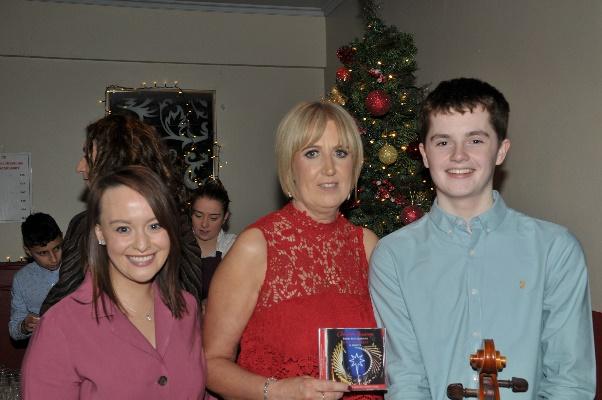 Anna Farren, Anne Nicholls and Paul Gillespie at the launch of “Christmas Greetings from Letterkenny”

You can support the St Colmcille’s Homeless Hostel this Christmas by picking up a copy of the CD “Christmas Greetings from Letterkenny” by Anne Nicholls and guests. CD is available online at www.ceolmusic.ie or from local stockists.

See more photos from the launch night below: 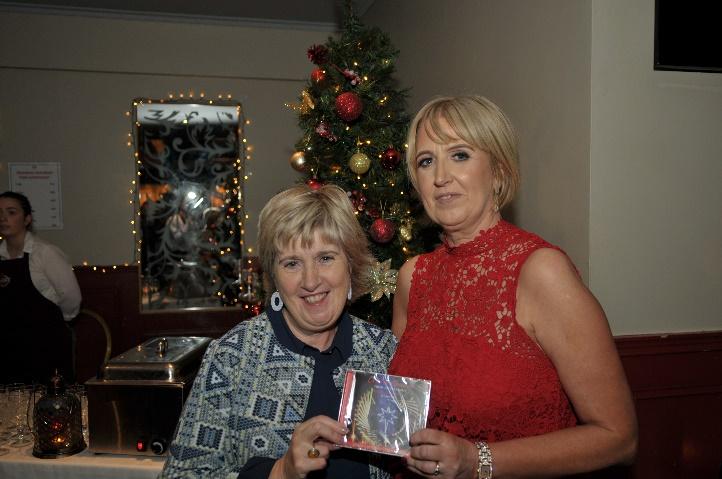 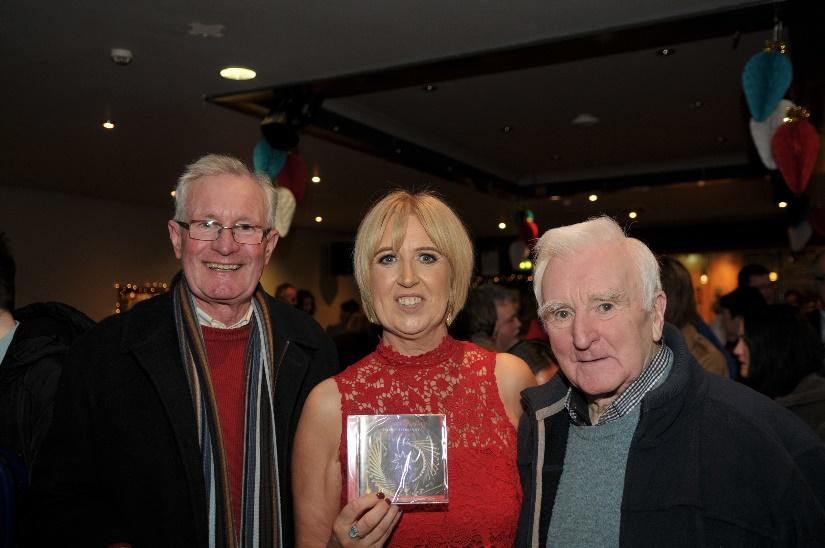 Anne with Noel Foley and Tommy Sweeney at the launch 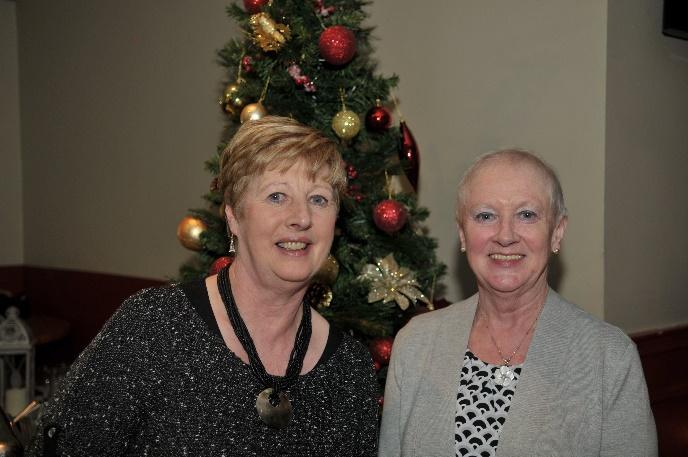 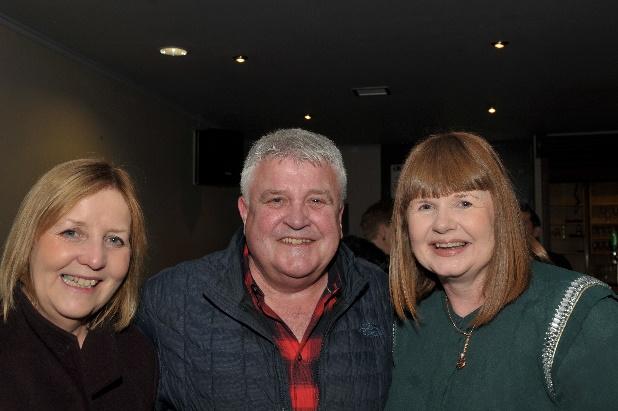 Teresa O’ Malley, Noel and Carla Jordan at the launch of “Christmas Greetings from Letterkenny” 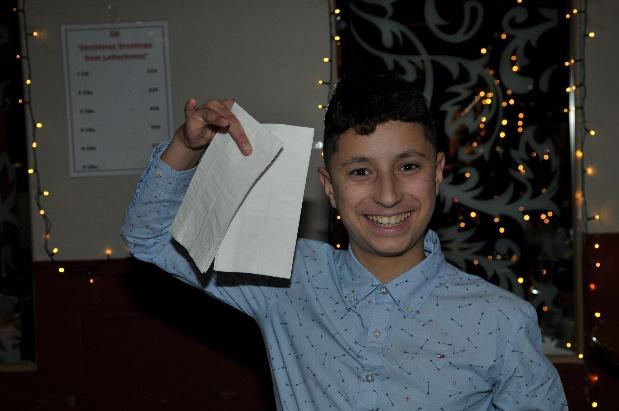 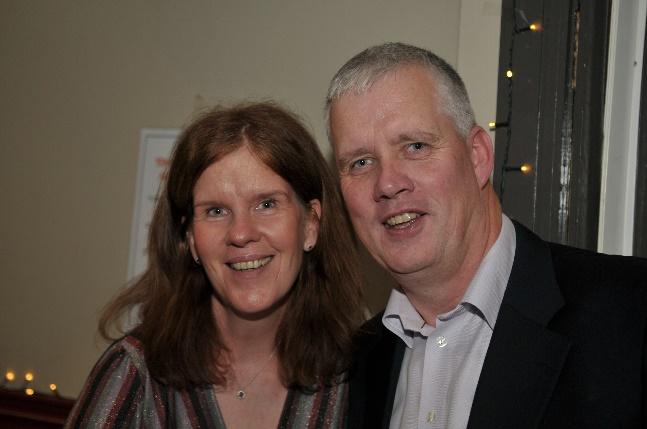 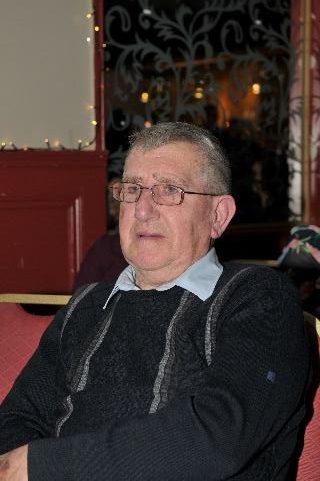 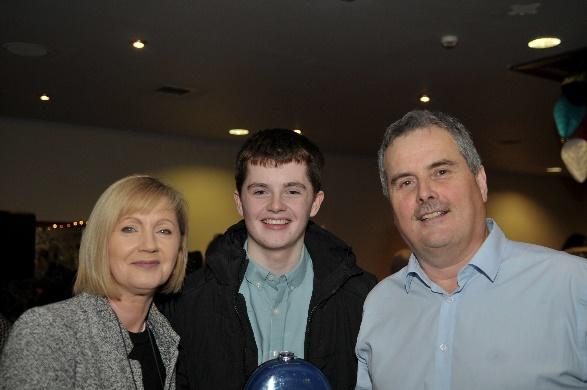 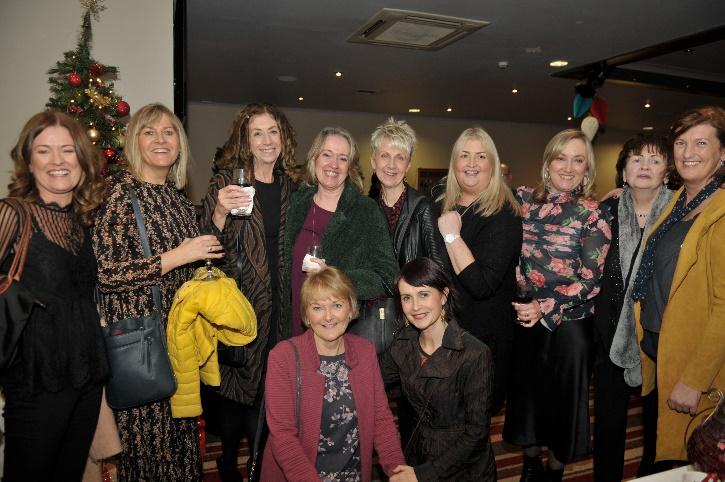 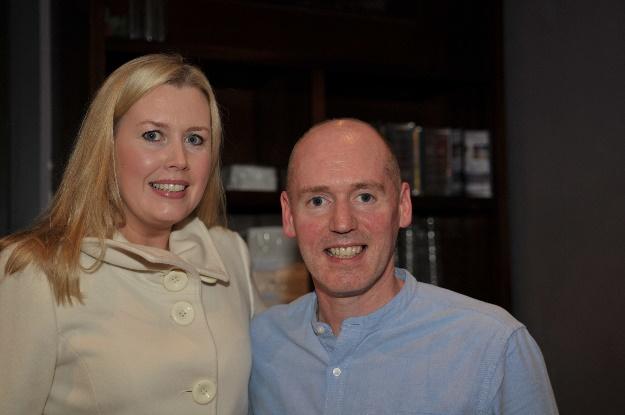 Martin Gallen and Caitríona Breslin enjoy the launch of the CD 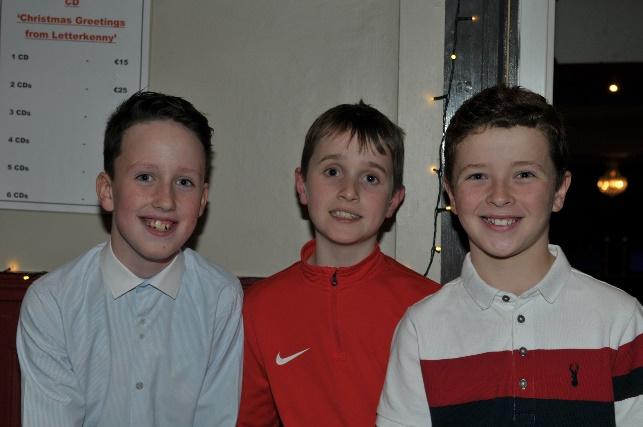