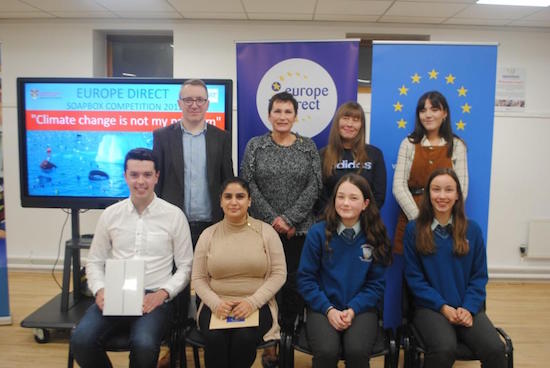 The regional final of the Europe Direct Information Centre annual Soapbox Competition was held in the Central Library Letterkenny on November 7.

The theme of this year’s debate was ‘Climate change is not my problem’. The Soapbox competition is an annual event hosted by the Europe Direct information Centre Donegal and Gaeltacht based in the Central Library Letterkenny.

The centre provides information on the work of the European Union and answers questions for citizens on EU law.

There were 19 contestants on the night and each gave a speech for or against the motion. The speeches were marked by a judging panel of Caitlín Uí Chochlainn, Deirdre Hines local author and poet, and Robyn Cleary EU Career Ambassador for LYIT.

The two winners will both go forward to represent Donegal at the national finals taking place in the Royal College of Physicians on November 20th.