Gardaí have issued a warning after three notable incidents of dangerous driving were detected in the Inishowen and East Donegal on Tuesday.

A person was arrested on Tuesday evening in Ardravan, Buncrana after failing the roadside oral fluid test for drugs.  The Buncrana Road Policing Unit confirmed that the driver had tested positive for cocaine.

Also, in St. Johnston, a driver was caught speeding at 127km/h, which was 47km/h over the 80km/h speed limit. The detection was made in an area in which local residents have expressed concerns over speeding, gardaí said. 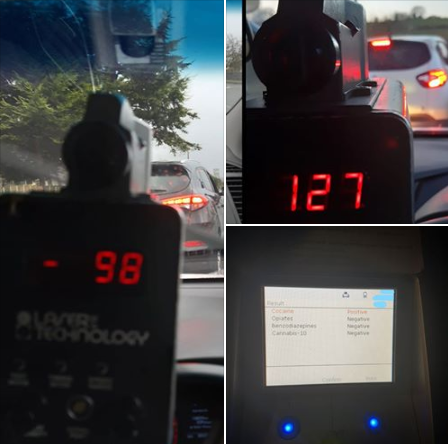 An Garda Siochana Donegal – incidents in Buncrana and St Johnston

Earlier in the day, a motorist was caught speeding at school time in Tooban, Burnfoot. The driver was travelling at 98km/h in a 60km/h zone.

Both speeding drivers will face fines and the suspected drug driver will appear in court at a future date.

Gardaí issued this warning after Tuesday’s incidents: “Please always adhere to speed limits and never ever drive under the influence of drugs/alcohol. A fine or a Court appearance could be what you will face if detected breaking road traffic laws and that is if you are fortunate enough not to lose your life or to cause someone else to lose their life first!”