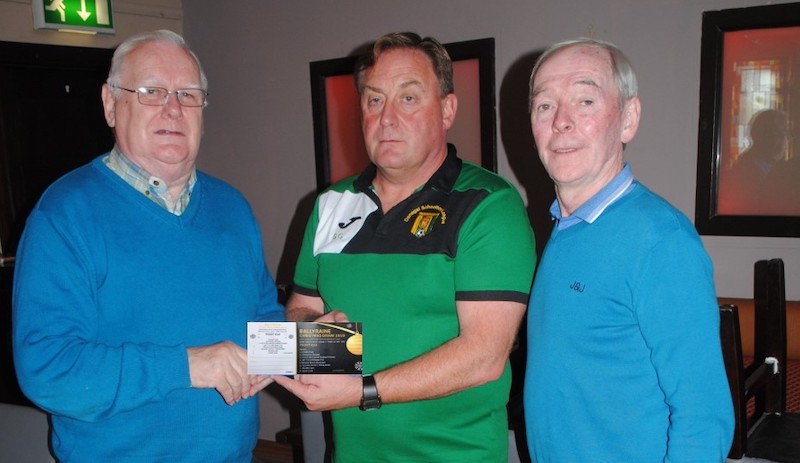 BALLYRAINE FC have launched their annual Christmas Draw as part of fund-raising drive for the development of their new pitch at Orchard Grove, Letterkenny.

Club founder Andy O’Boyle and secretary of the Letterkenny and District Schoolboy League Gerry Gallagher joined club coaches and players at the launch in Arena 7 on Monday lunchtime.

The old Ballyraine pitch at Orchard Grove, Letterkenny is currently being upgraded to a state-of-the-art sports field.  The Ballyraine Community was successful in securing funding for the project from the LEADER European fund, administered by the Donegal Local Development Company (DLDC).

The development work has been ongoing all year with most of the work now complete and the pitch will be ready for use in the latter part of the 2020 season.

Enda Nicholls vice chairman at Ballyraine FC explained: “The club has set the target to raise €50K of matching funding for the pitch development last year

“We have 8 great prizes in the draw this year and the tickets are very reasonably priced at €10 each.

“The prizes include three cash prizes totalling €2,500, an LED Smart TV, VIP tickets to the All-Ireland Football Final, a Christmas Hamper and a €200 voucher for Arena 7.

Tickets are now on sale and and ca be bought from player or member of Ballyraine FC.

Gerry Gallagher, secretary of the Letterkenny and District Schoolboys League attended the Christmas draw launch and said: “On behalf of the league we would like to wish Ballyraine FC all the best with the draw.

“I was up at the pitch recently and it’s looking great.

“We are delighted to see clubs such as Ballyraine FC develop state-of-art facilities and we fully support their efforts”.

Tickets for the Ballyraine FC Christmas Draw can be purchased in Arena 7 or from any Parent, Coach or Committee member of the Club.

The draw will take place on Thursday 19th December 2019.