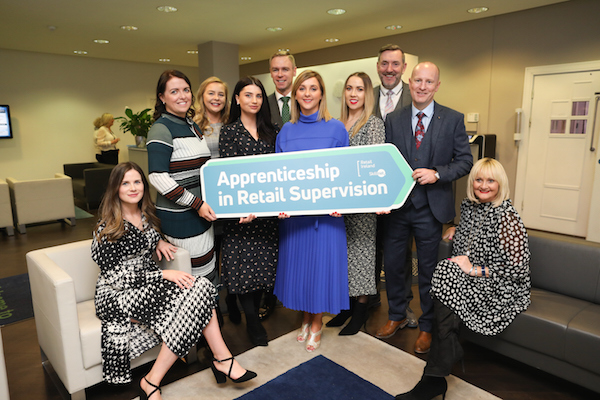 Donegal based Retail Ireland Skillnet, the Ibec group that develops and delivers training and education programmes for those employed in the retail sector, has launched Ireland’s first national apprenticeship programme for the sector.

Over a three-year period, Retail Ireland Skillnet collaborated with leading national and international retailers and work-based learning experts to ensure the programme addresses the skill requirements of the ever-changing retail sector.

Speaking at the launch, Programme Director, Dr. Oran Doherty said retailers have recognised that in order to compete successfully in a knowledge economy, they need to continuously invest in their most important asset – their people.

He said “The two-year Level 6 programme is targeted at existing retail employees who aspire to be retail leaders. The apprenticeship has been extremely well received by industry with over forty retailers from a wide range of subsectors including fashion, pharmacy, homeware, DIY, food, department stores and convenience stores currently participating on the programme.

“The Apprenticeship in Retail Supervision commenced in October 2019, with over 100 apprentices from 24 counties around Ireland attending class in either Dublin or Galway”.

Based in the Colab in Letterkenny, Retail Ireland Skillnet are widely recognised as leaders in the design and delivery of work-based training and education programmes for the Irish retail sector.

It provides retailers with an opportunity to attract and retain talented individuals, while helping further define clear retail career paths.

There are a number of reasons why multiple and independent retailers nationwide have responded positively to the programme. Namely, there are no registration fees for an employer or apprentice wishing to enrol on the programme.

In addition, there is minimal disruption to the workplace as the Apprentice is only required to attend classroom-based learning 24 days per year which are delivered in two-three #day blocks. Furthermore, the Apprenticeship in Retail Supervision addresses the practical opportunities and challenges currently impacting the Irish retail sector”.

The Apprenticeship in Retail Supervision is primarily targeting existing retail employees who have been identified as future managers. Retail Ireland Skillnet can only take applications for the Apprenticeship in Retail Supervision from retailers. School leavers and career-switchers interested in enrolling on this programme should secure retail employment with a retailer willing to sponsor them over the two years.

The programme commences annually with registrations for September 2020 accepted from retailers from January 2020. To find out more about the Apprenticeship in Retail Supervision, visit www.retailirelandskillnet.com or contact the Retail Ireland Skillnet Team on 074 9176853.